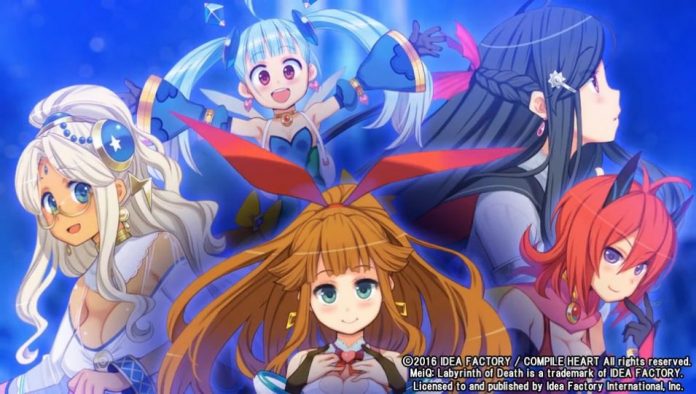 Japanese developer Compile Heart and its parent company Idea Factory are gaining a lot of ground with Western audiences as of late.

In addition to developing some popular series as of late like Hyperdimension Neptunia and Fairy Fencer F, they also localise a great number of their titles for North American and European audiences. That being said, they also earn a lot of scrutiny for their over-the-top fan service. Leading ladies in extremely revealing outfits are commonplace, making their games appear as mere fan service to some. MeiQ: Labyrinth of Death is a first-person dungeon RPG featuring a group of girls, armed with giant mechs and tasked with saving the world.

Hundreds of years ago, an eternal night fell upon the world. Monsters appeared as the world began to die, and soon even the celestial bodies orbiting the world ceased to function. Legend told of a legendary mage who managed to restart the world, returning both light and peace. Now, young Machina Mages from around the world flock to Machina City to follow in the legendary mage’s footsteps. Only the strongest mages will be able to perform the resetting ceremony and bring an end to the eternal nighttime. Admittedly, I found the story’s premise to be quite intriguing at first, but the plot never really expands to establish a stronger sense of lore. At the beginning of the game, five Machina Mages – the main cast of characters – appear to be the only ones pursuing this goal. Machina City feels barren. If mages are coming from all around the world, why does it seem as if nobody is around? Was there a selection process that chose these specific mages for the task, or is it first-come-first-serve? These kinds of questions never get answered, and plot details are always scarce.

The player follows Estra, a young Machina Mage from a rural town as she arrives in Machina City to perform the resetting ceremony. Estra is an overly upbeat character that, while limited in depth, is passable as a leading heroine. Her companions, however, fall into cookie-cutter tropes of both RPGs and anime. You have your glasses-wearing educated girl, the tough girl who starts as a rival but reluctantly becomes your friend, the childish girl who is a bit of an oddball, and so on. These generic characteristics for each mage persist through the many cutscenes that take place during the game’s almost 20 hours. Early on, Estra encounters the primary antagonists who aim to plunge the world into darkness, and these characters also feel like typical bad guys for the genre.

Rather than the town, dungeons are where you will spend the majority of your time in MeiQ: Labyrinth of Death. Each dungeon features the same formula: navigate through a multitude of floors until reaching the end, where a boss creature awaits. If you’ve played a first-person dungeon crawler before, then this is nothing new. Exploring causes your map to record your steps, making return visits much less frustrating. Warp devices are located on most floors, but some floors are massive so walking at least a bit is inevitable. I also encountered some frame rate stuttering when walking through a wide-open area with my map in its largest setting. This isn’t a glaring issue, but it was persistent for me and may bother some. 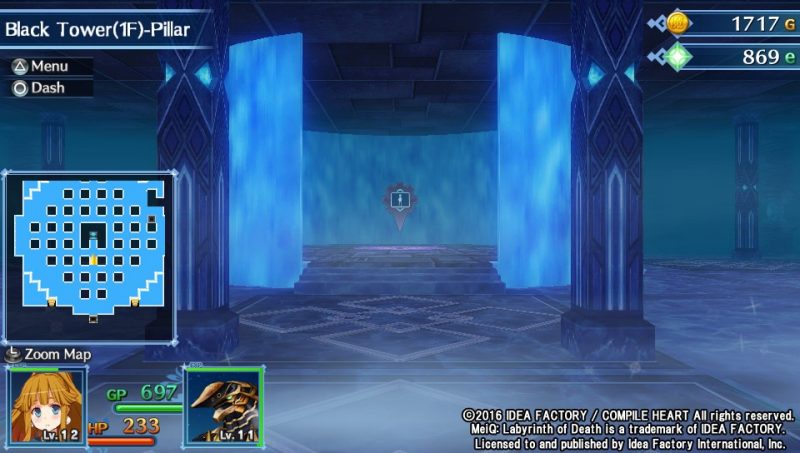 A huge warning: if you hate backtracking through dungeons that you’ve already beaten, you will not enjoy MeiQ: Labyrinth of Death. It was around my third time backtracking through the first dungeon to acquire some obscure item when I realised I had stopped having fun. The game’s story uses blockages in further dungeons to re-route you back to places you’ve already trudged through. This is not a good thing, nor is it enjoyable. It just feels like padding to extend the game’s length and the plot lazily comes up with excuses to go backwards. Granted, it could have been more enjoyable if dungeon designs were anything more than average. Unfortunately, they’re not. Environments are repetitive and bland, and you’ll find yourself retracing the same steps to the point of boredom.

While navigating dungeons, random encounters trigger turn-based battles. Your party takes part in battle as pairs; each Machina Mage is accompanied by a Guardian – a giant mechanised creature sworn to protect its partner. Both mages and Guardians have their own abilities, but each pair is allowed only one attack per turn. Levelling up provides mages with new spells and improved stats, while upgrading Guardians is slightly different. Guardians’ stats improve, but their battle skills come from changing their equipment. Guardians and battle skills each have an elemental affinity, and choosing the right elements when in battle is crucial when aiming for the most damage output. Thankfully, an elemental chart can be opened by selecting Start at any point during battle.

What’s bothersome about battles is its pacing; the speed at which attack animations take place is disappointingly slow, which makes battles less exciting overall. The game affords players with the ability to speed up animations by holding X, and I found myself doing this in nearly every battle. Battles are also extremely easy. In more than one instance, I landed a combo attack from two of my Guardians and it knocked off over half of a boss’ max health. Players can switch between normal and hard mode at any time, but in my experience, these modes should be called easy and normal, respectively. Neither one felt like they sufficiently challenged me, and I flew through battles by spamming the same attacks over and over. 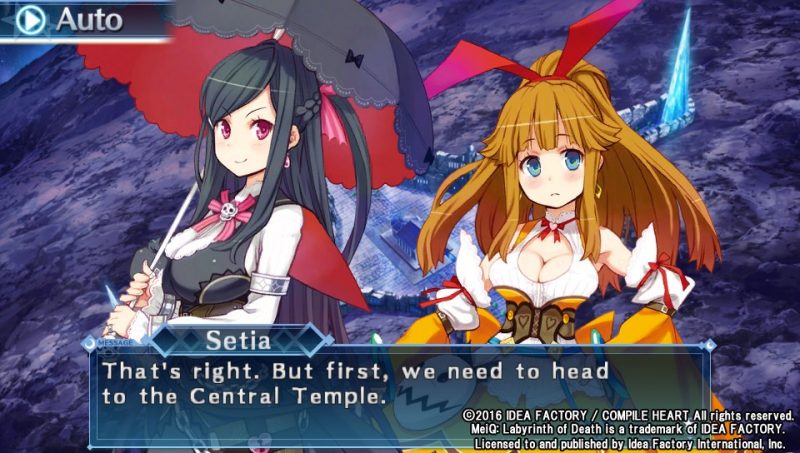 On a system like the PlayStation Vita, where dungeon crawlers are plentiful, MeiQ: Labyrinth of Death isn’t worth your time. Its characters and story are ultimately quite shallow, and its turn-based combat is standard fare, with nothing new or exciting to set it apart. Guardian customisation is a nice touch, but the game’s lack of difficulty doesn’t make upgrading feel like much of a necessity. The dungeons themselves aren’t anything exciting either, and the amount of backtracking that the game makes mandatory is just saddening. It is literally padding without any reasonable justification. Unless you’re really desperate for some anime girls and mechs, you can find much better dungeon crawling experiences elsewhere.

MeiQ: Labyrinth of Death is available on PS Vita.