Bandai Namco, the name behind the Dragon-Ball Z and Tekken series amongst many others, has launched a website that teases a new project. The project – entitled Little Nightmares – suggests horror genre leanings and is somewhat of a departure from their previous work.

The reveal comes after Namco recently commented about bringing a new IP to an audience in the West. They remarked that the IP would be officially shown off at Gamescom in Cologne, Germany but it looks like they’ve already started to build anticipation with a cleverly designed website hinting at the new game.

In a sinister, black and white style the tagline “unveil what’s been lurking in the darkest depths” adorns the site. The site contains a few puzzles that it invites you to solve with each other being unlocked on separate days. Solving the puzzles “rewards” you with a creepy looking child-monster.

Also, its been reported that several members of the games media has been sent invitations to a secret meeting at Gamescom later in the month.

Whatever Little Nightmares is, it certainly looks like a dark, terrifying entry to the list of published games by the company. There will undoubtedly be more information revealed at Gamescom later this month – possible a trailer, or even a gameplay reveal. 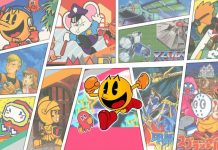