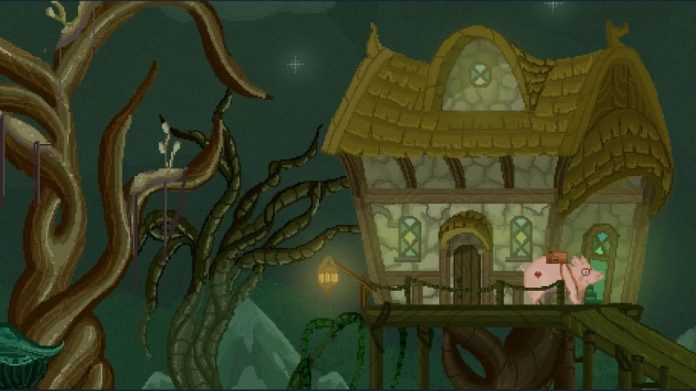 Okay, okay I apologise for the pun but this game really is full of them – an absolute pig if you will.

Pigsodus is the lastest game on Kickstarter I’ve decided to have a little look at. Now, I know what you’re thinking – a game about pigs, really? What if I told you that Pigsodus harkens back to the days of LucasArts’ point-and-click adventure games in the style of George Orwell’s Animal Farm? And it has absolutely stunning artwork!

You play as Horace Oinkenstein, a rather intelligent pig with an aptitude for science. After escaping from being butchered (quite literally) Horace must find a way to rescue his other porky friends while being relentlessly chased by butchers, hunters and wolves. As a point and click there is numerous puzzles to solve and an innumerous amount of things to examine and hears puns and jokes about. To avoid the many things trying to make pork scratchlings out of you, you will need to make use of Pigsodus’ stealth system. When stealth doesn’t go to plan a rather unique – if a little basic currently – combat system awaits. You have numerous tactics to use each of which is backed up by different fighting styles. You may be asked to mash buttons or, my favourite, type out comic fighting sounds like Whooosh or Thudum Zap as quickly as possible.

Pigsodus is still in early Kickstarter and as such everything isn’t perfect. The quirky combat system leaves a little to be desired and animation isn’t perfect but there is much more to be impressed about. Namely, the artwork and soundtrack. The soundtrack – composed by Peter Surmacz – wouldn’t be amiss in a AAA fantastical adventure and the pixel art (or as the devs call it, pigcelart) is nothing short of beautiful. Take a look below!

You can follow, back and play the short demo of Pigsodus’ on the official Kickstarter page, and you can You can follow its Steam Greenlight page here.