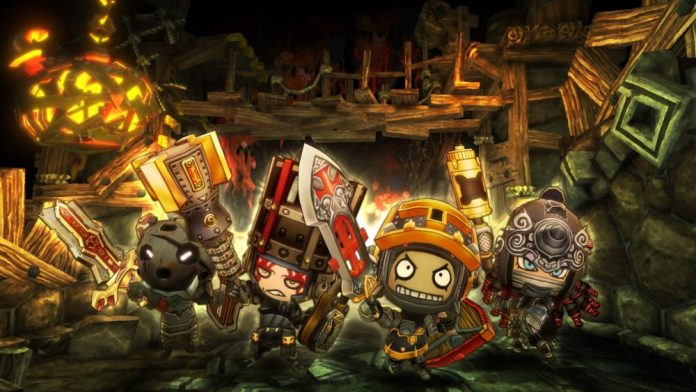 Back in 2012 Toylogic, a Japanese studio, released their first full title: Happy Wars. Happy Wars was the first full free-to-play game on Xbox 360.

It was a model that was beginning to dominate the mobile gaming place, which it still is to this day – it was incredibly successful on the Xbox 360. Now in 2016 Toylogic are back with their second title; Happy Dungeons. Happy Dungeons uses the same free-to-play model that made Happy Wars so addictive and ultimately, so successful.

Currently released on the Xbox One Preview program, already the general feedback on social media from those playing seems to be good. If you are enjoying the preview, and want to share some feedback with Toylogic, then head on over to the official support site and submit away until your little cartoon style heart is content.

At the time of the preview launch, President and Executive Director at Toylogic, Yoichi Take, said:

“Happy Wars was played by millions of people and remains popular even today proving that even hardcore game genres can be appealing to all manner of players with the right blend of excitement, fun and accessibility…We’ve spent the last three years improving on that formula with Happy Dungeons. Our single priority is to challenge ourselves as creators technically and in the pure spirit of fun.  We hope players will see that reflected in Happy Dungeons.”

Honestly, from what I have seen in the preview, they have nailed exactly this and more. So far, so good.

Happy Dungeons is a cooperative RPG created specifically for multiplayer gaming. You can join in with up to three friends via Xbox Live or just team up with family in your living room. There is no single player to talk of, but you could play the entire game on your own, just be prepared for it to get very hard. Happy Dungeons is, at its heart, a story-driven RPG which comes with four separate, and difficult, levels starting at Human, Hero, Death and then Insane. 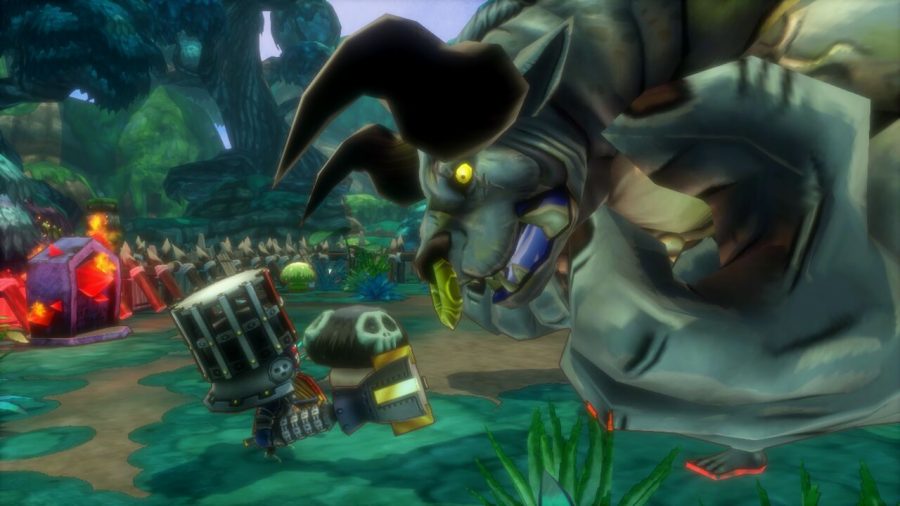 Although very quest/story driven, the game itself is not an open world title. Quests are referred to as “dungeons” and are timed. In the early stages of the game, most of these dungeons come with 30 minutes in which you need to complete them, or you fail. The nice thing is that the enemies on screen seem to level with you, so whatever point you are at, you can be guaranteed of a decent challenge.

You’ll need to consider your character and you’ll soon be presented with options to start the customisation process. First is your class, and keeping to RPG tradition, you’ll be able to pick from Warrior, Cleric and Mage. Then, breaking away from RPG tradition, and more in line with a typical Toylogic title, you’ll be able to pick the strangest and quirkiest outfits, colours and facial expressions I’ve seen in a long while (and I am currently playing WWE 2K16, so that says something!).

The story line is simplistic, which doesn’t detract from the game. You are to assist the Order of the White Dragon in rescuing the Princess who has been kidnapped by the evil Goblin King. You’ll work your way through a number of quests and side missions, exploring different areas before being pitted against end of level bosses. You’ll fight waves upon waves of goblins and their minions in your epic quest.

The tutorial mission starts with the kidnapping and first few waves of enemies. It’s simple and easy to follow, with the game explaining each of the controls and teaching you how to interact with the environment around you. Enemies don’t last long in Happy Dungeons, but there is an incredible amount of them to smash your way through.

As the Warrior, you’ll be diving in head first, swinging your sword around to dispatch them in groups. If you picked the Mage as your class of choice, then it’s all about keeping your distance and controlling them with magic, and if you went for the Cleric, then you best hope you have friends to play with as you’ll be geared towards healing more than anything else!

In true RPG style, there are plenty of items to pick up, gear to equip, potions and weapons to collect and, of course, levelling up your character and unlocking new attacks and powers to use. Destroying the various crates and barrels dotted around the landscape will reward you with coins to spend between levels and food to replenish your health. On closer inspection, the food items scattering the landscape reminded me of the item drops in Final Fight. 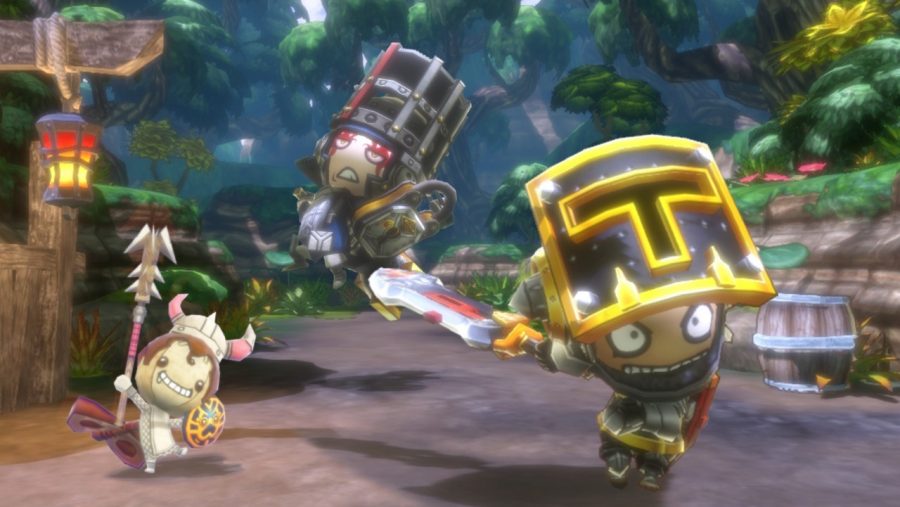 So, on to some of the smaller issues I encountered. Remember, this is a preview and we are still due the full release in the not-so-distant future, so hopefully, most of the issues I’ve found should be fixed before full release.

Dungeons can be a little short and sweet, and some have no enemies. Combine both of those elements and it’s literally less than 30 seconds to walk through a dungeon before being presented with another loading screen. Load times are not too bad, although I found on occasions that the smaller, less populated areas as described above can take longer to load than the more complete dungeons which is puzzling.

I didn’t experience any real lag to talk of when playing with others over Xbox Live. However, on a few occasions, textures would pop in and out randomly, and a few times my hero found himself stuck behind rocks and other environment items. Spinning the camera angle round quickly resolved this about 50% of the time, but for the other 50% I found myself having to restart.

Achievements come thick and fast in the preview, including one for simply loading up the game. There’s also a feature which is a nod to those who played Happy Wars and unlocked lots of achievements. You’ll actually be rewarded in Happy Dungeons for this – a generous gift from Toylogic!

The overall music and sound effects are delivered well; the intro music reminded me of MediEvil, the PlayStation 1 title whose leading character was a skeleton Knight. During the menu screens between levels, the music was a little overbearing and repetitive which distracted me a few times, forcing me to turn down the volume.

As the preview (and full version) have an in-game currency system, we should touch on that. At present, and I imagine it will be the same in the full release, there are daily login bonuses similar to mobile games. Login after one day, get a Happy Jewel; login three days running and get Happy Card Free Pass. Happy Cards Packs provide both rare and everyday items to use. You buy these using Jewels, using Free Passes or collecting Happy coins in game. Jewels can be purchased, and packs range in price from £0.79 for 10 to £64.99 for 1400. 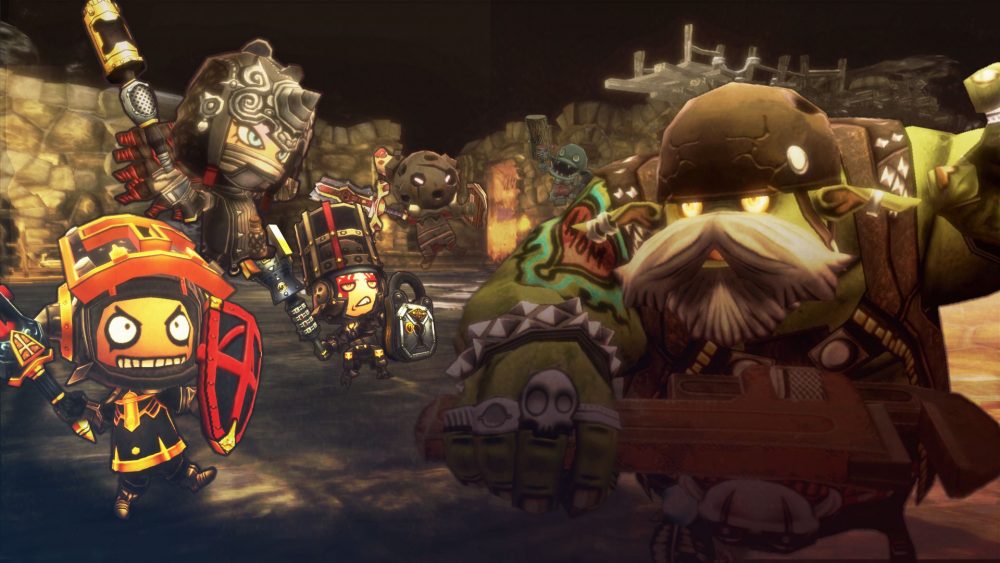 There is still uncertainty in the industry as to whether or not the model works for console gaming. Neverwinter, from the outside, seems to be making it work with a bunch of updates and free expansions released since the initial base game hit the Marketplace. Happy Wars definitely worked and, of course, the free-to-play model is highly successful when it comes to mobile gaming, with developers like Supercell (of Clash of Clans fame), becoming multi-millionaires. In three years their total worth grew by 800% – a clever combination of marketing, target audience appeal and a clever in-game currency system.

Overall, Happy Dungeons is great fun and for a preview, there isn’t a lot that needs to be finished off. A few texture issues here and there with the odd moment of lag. A few dungeons looking a bit bare, but this should be easily resolved before release. A perfect pick up and play, comic-styled dungeon crawler with heaps of customisation and replay-ability is on offer.

Happy Dungeons is available on Xbox One via the preview program.