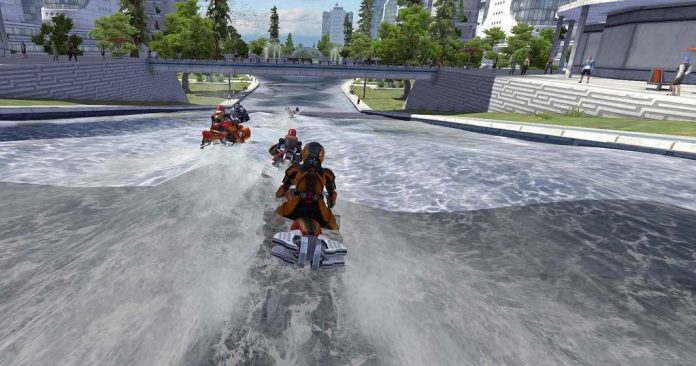 Riptide GP: Renegade is the third installment in the franchise specifically developed for consoles and PC. Does this mobile spiritual successor to water racers like Jet Moto have what it takes?

Riptide GP: Renegade takes place in a futuristic city filled with diverse tracks. There’s a loose story built into the career mode, but it’s barely worth mentioning. You’re a hot new racer trying to prove their self on the underground scene. An old friend and rivals will appear every now and again with some quick jabs, but calling it a story is like saying the warning label on a bottle of pills is a tale. As if one needs a reason to race wicked water bikes in a futuristic city, but it’s there to those curious.

Going through the campaign is simple enough: racing earns players experience and cash as well as a star rating at the end of each event. Most races are simply that, races, but there are other modes to keep in mind. Elimination extracts the last place pilot every ten seconds until there are only three left. Checkpoint racing is a single event wherein players have to hit as many nodes as possible along with going against the clock.

Tracks vary from a park washed out with water to a forest set on fire. There are only about nine courses in the game, but the campaign remixes them, creating new ways to venture through so locations remain feeling fresh, even when you revisit them multiple times. Courses also tend to change during races, in a similar style to Blackrock Studios’ Split/Second from back in 2010. They’re well designed, albeit played safe in terms of a water racer, but good nonetheless. 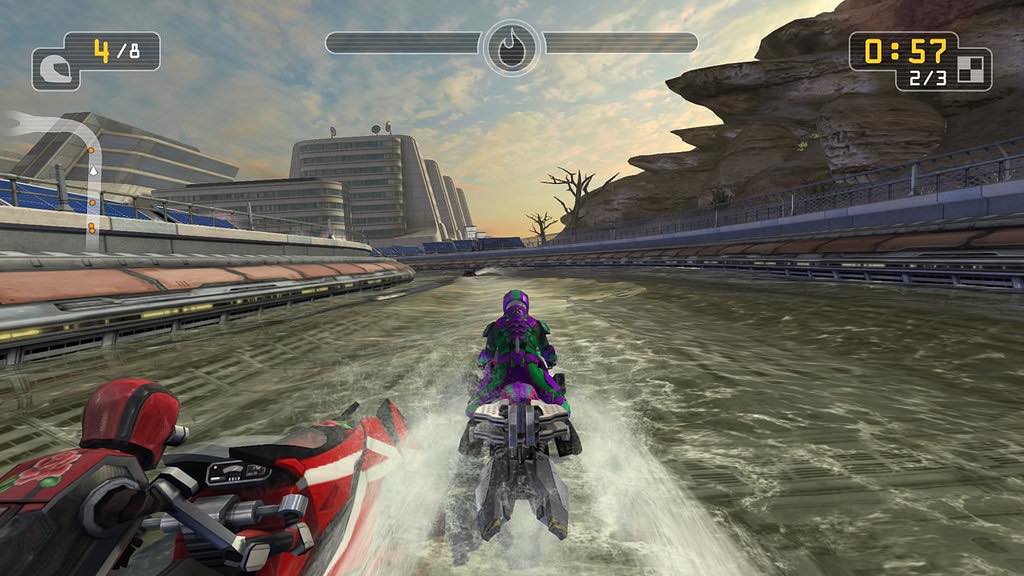 Your overall goal in Riptide GP: Renegade is to score one to three stars on each track. The more stars you earn, the more experience and money you’ll be rewarded with. Plus, earning at least one star will unlock the next campaign mission. That may seem like an easy undertaking at first, but as you’d expect it gets harder as you progress further through the game. Some events may start to feel cheap, as if the A.I. has an upper hand at all times. It can be frustrating especially when victory is moments away, only to be ripped away from your sweaty hands. That’s the gist of most racers though.

While skill is definitely at play, simply grinding can also help level the playing field. Similar to a good RPG, any time spent with Riptide GP: Renegade is not wasted, even in defeat. Cash can help beef up a rig’s acceleration, top speed, handling and boost capabilities, making it easier to pass through those trickier levels. Experience unlocks abilities like speed boosts, or new tricks to perform. Again, this alone will not ensure victory, but it certainly won’t hurt your chances to grind every now and again.

Speaking of tricks, catching air or grinding on objects allows you to perform a variety of feats. Simply nailing them will grant power to the boost meter, which will give you gentle bursts of speed. As you level up, the stunts get more complex and it gets riskier to perform them correctly. The harder the trick, the better the boost. Aside from steering well, it’s imperative to make the most of these obstacles and gain as much power as possible. Considering Riptide GP: Renegade comes from a mobile developer, there’s much more complexity to it than you’d imagine.

Aside from the career mode, players can venture online with multiplayer, hang out with up to four friends on the couch for some split screen action, climb the leaderboards, or jump into a single track just for fun. And when I say “jump in”, I mean it. Load times are incredibly fast and lessen the pain for having to retry courses repeatedly in the campaign. The only holdup to this is network play; I had trouble multiple times attempting to connect to match. Either Riptide GP: Renegade hasn’t attracted a big audience yet, or there’s actually something wrong with the code at play. When it works it works, but again, it wasn’t reliable. 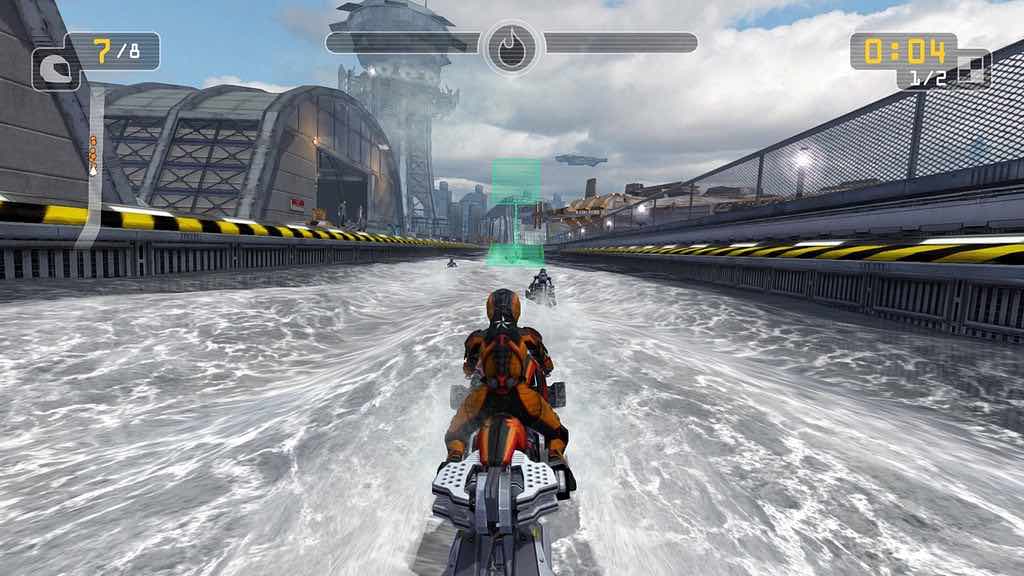 Visually, Riptide GP: Renegade leaves a lot to be desired; it looks more like a PS3 than a PS4 game, but considering the developer’s mobile roots, it’s not all surprising. However, more importantly, it controls well, loads quick, and the frame rate makes races exhilarating regardless of the look. Riptide has style and that’s more important than graphics anyway. Similarly, the soundtrack’s electronic beats aren’t anything to write home about, but they do enough to pump players up. It’s not brimming with content, but the assortment of courses, pilots, bikes, and other customisation options provide a nice stick to keep players interested.

Riptide GP: Renegade is an impressive racer born from the mobile market. It’s by no means a stellar title, but it does provide a nice homage to the classic Jet Moto series. Racing can be unfair at times and it’s on the shorter side of things in terms of content, but the RPG-like hooks of earning rewards even in defeat make the losses less damning. There’s not exactly a wow factor here, but plain and simple, it’s fun albeit for short bursts.

Riptide GP: Renegade is available on PC, PS4 and Nintendo Switch. We reviewed the PS4 version.