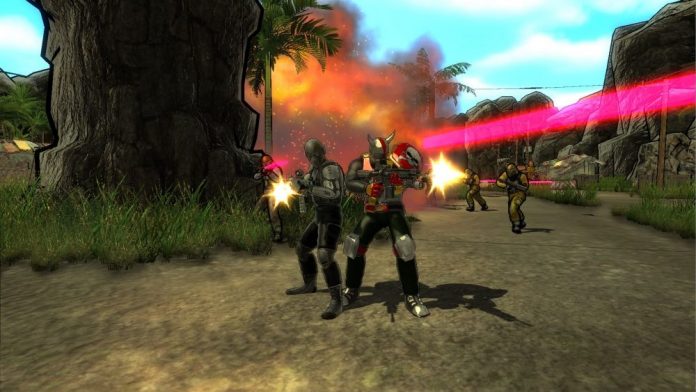 Despite its title, Action News Heroes has very little to do with reporting the news, and more to do with defeating the fast food overlords that seek to enslave the planet.

Don’t let this silly premise fool you though; this top down shooter plays host to issues in both its appearances and its shooting. Its single saving grace can be found in its abundance of characters and unlockable weapons, but that is not nearly enough to compensate for its stale gameplay. If I had to pick one word to describe Action News Heroes, “bland” is the word that first comes to mind. Much of the game is not very innovative in any way, and the most of the objects and environments are populated with muddy textures.

Action News Heroes does its best to capture that classic arcade style of shooter. The best comparison I can make is to that of the 1985 arcade game Commando. There are over a dozen different characters, grenades, weapons, and super abilities that you can choose from before you start a level. The characters are all unlocked from the get-go and each have differences in their speed and their total health. Weapons, however, need to be purchased with money that is dropped from enemies. Gathering more money is essentially the only reason to go back and play a level though, since there’s no score or leaderboards to speak of. After you’ve conquered all eight levels, there’s almost no incentive to revisit them, which leads to a big lack of replayability.

The shooting is very mediocre; the guns and bullets never feel like they have any weight to them like they do in games like Dead Nation or Helldivers, where the enemies die in fanatic and gory ways. Most of the enemies just flop over, or blink out of existence when they die, and don’t react at all when they get hit. The objective of all eight levels is the same: make it to the end of the level and beat the boss. This simplified objective would have been perfectly acceptable had it not been for the inconsistent ratings mechanic that the game uses. The mechanic is pretty simple; you gain ratings by killing enemies or blowing up objects, and you lose ratings by getting hit or letting enemies escape.

If your ratings hit zero, then you lose the level. I use the term “escape” here loosely because that’s the first inconsistency that comes into play with the rating system. The game uses confusing terminology. Enemies don’t actually “escape”. This just means that you lose ratings if you pass by enemies without killing them, which would be perfectly acceptable if it worked like it was intended. In my playthrough of the game, certain levels would practically break rating system entirely, causing me to lose ratings despite not having any enemies on my screen or radar on top of having my ratings decay passively over time. Even worse, were the constant “boos” in the background that would play if your ratings dropped below 35 percent.  I didn’t think I would find something more annoying than the “low hearts” sound effect in The Legend of Zelda in this day and age. 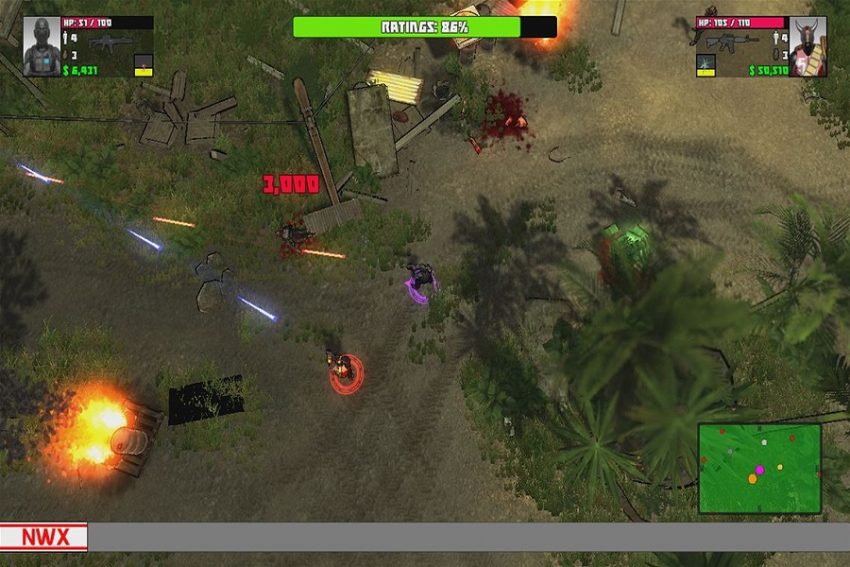 If you manage to fight your way through the frustrating ratings system, what awaits you at the end of every level is a boss that needs to be defeated for the level to be completed. Usually, video game bosses are a way for a game to introduce cool and unique methods of defeating them, often challenging the player with a variety of different types of attacks or movement. The bosses in Action News Heroes do none of that. At the end of every level instead of being introduced to a cool and unique boss, you basically have to fight a faster moving enemy with a larger health pool, and only one type of attack. It’s so incredibly disappointing and anti-climactic. The bosses are easily forgettable, and are so simplified that the fights are actually more mindless and tedious than traversing your way through a level. The two player co-op might be able to alleviate some of this monotony, but I doubt even friends would be able to do much to soften this disappointment.

The music (if you can call it that) is only one soundtrack of the same beat being played over and over again without rest. It didn’t bother me at first, but after a few hours in to the game I was beginning to wish that there was an option to turn it off entirely. The levels themselves are wide and do have a some variety between them, but the textures that are used on the objects and environments are muddy and ugly. The waypoint system and the minimap are horrendous. Rather than having something that will always point you in the direction that you need to go, the minimap has stationary arrows that point to the boss. This means that if you ever stray from the path to grab some extra cash or hostages, you have no way of finding the arrows again if you forget which way you came from. The minimap itself is horribly executed, showing nothing more than nearby enemies, and the occasional money or health drop. It gives you no idea of what the surrounding area looks like, or which way to go. Even the story, which is told through four or five page comics, is completely uninteresting and lacks any sort of humor that you would expect from a game with such a ridiculous premise.

Action News Heroes is a mediocre shooter that is brought down even further by its annoying music, frustrating rating system, and lack of replayability. The variety that it offers in its characters and weapons do almost nothing to alleviate the multitude of frustrations in its gameplay. Even with a co-op partner it’s hard to imagine that Action News Heroes will be able to satisfy that desire for a game with that classic arcade style feel.

Action News Heroes is available on Xbox One.