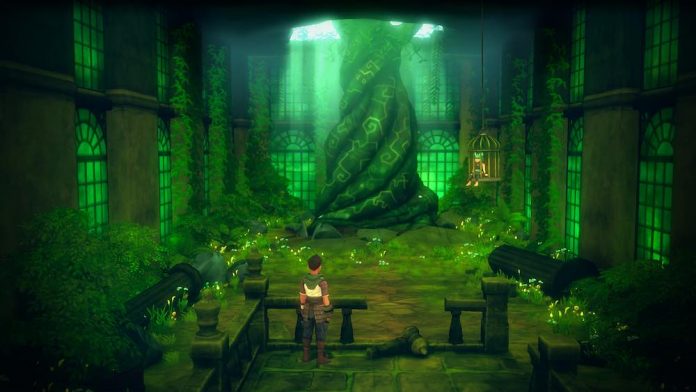 Earthlock: Festival of Magic marks the glorious return of the heartfelt, story-driven, turn-based JRPG; the kind of game we haven’t experienced since the era of Lords of the Rings: The Third Age and Final Fantasy X.

Whilst it is certainly less dark and more child-friendly than its predecessors, it nonetheless captures the spirit of danger, adventure and of burgeoning relationships which made those classic titles memorable. Though not perfect in execution, and suffering from the odd minor technical fault, it is still a welcome to return to an old-school style of game-making, and proves that that story-driven, character-centred approach to narrative can still work in video games, and what’s more, when done well, results in something truly engaging.

As I played Earthlock, despite its simple battle-system, its lack of AAA polish, its dirth of much in the way of new mechanics, I found myself slowly being enamoured by it, and I realised there was something special about this game. “Charm” is a good word for it; “character” is another. It draws you into its world despite how much I wanted to write it off as another re-tread.

So, what can you expect? You can expect a party-system in which you control up to four characters. Each of these characters has unique skills. There is a fighter (Olia), a mage-stroke-healer (Gnart), a thief (Amon) and a soldier (Ivory). At one point in the story you also play as Amon’s “uncle” Benjo, who is a delightfully cool character toting a hammerhead shark face and a blunderbuss. If you’re getting the whiff of faint familiarity here, your nose is leading you right: Benjo’s name echoes the “uncle” of Luke Skywalker as well as his Jedi mentor Ben Kenobi, and Uncle Benjo’s role in the story draws something from both those allusions.

Each character has a Talent board which can be extensively customised. As you level up, you gain talent points and these can be used to activate a node. There are three types of node: Stat, Perk and Ability. Stats nodes often offer bonuses to your character’s basic armour, magic, resistances, attack power and health. Abilities give you access to new unique attacks and skills. Perks operate like passive skills. For example, boosting the damage of all ammunition based weaponry. Unlike other talent trees where there are often no more than one or two choices per upgrade, the “board” is one of the most flexible of all the talent mechanics I’ve encountered because of the sheer number of talent nodes. Talent nodes are treated more like items, and therefore they can be crafted and customised in your inventory and then applied to your talent board. This also allows you to re-arrange some of your stat node choices whenever you want, rather than being stuck with choices made early in game.

Much like other turn-based games, you walk around the map and will trigger a fight if you get too close to enemies. Unlike other turn-based games however, the enemies actually appear wandering around the world map (as opposed to a meter building up in the corner of the screen). When you get close, these enemies will rush towards you and a circular meter appears in the bottom left of the screen. If you press “A” before the meter builds up, then you will initiate the combat and get “First Strike”, which allows you to take the first turn. Alternatively, you can try and get away before the meter builds up. Whilst only a small tweak to the familiar mechanic, it does change the gameplay, allowing you to draw enemies away and segregate them from their companions before attacking or gather them all together in a big horde so you can fight them all at once. 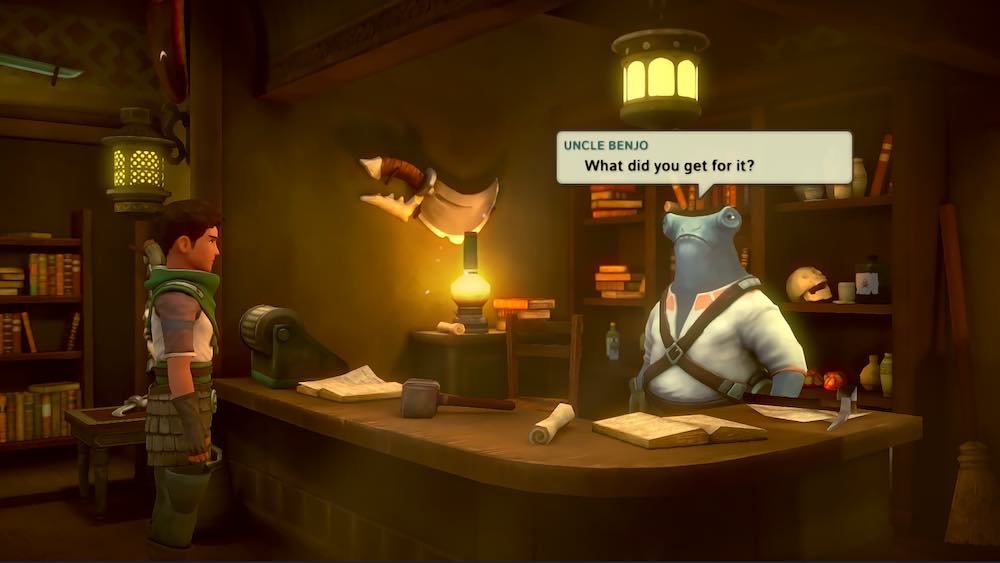 The combat itself is simple so that it is quickly grasped but with enough tactical complexity to keep it engaging. Each of your characters has multiple stances and various abilities aligned with each stance. Olia, for example has a Warrior stance in which she has several attacking abilities and then a defensive stance which allows her to taunt enemies (locking them in to attack her) or give her the ability to counter-attack after being hit. As well as the standard types of damage expected in any JRPG – lightning, fire, water, poison – there are also subtler variations such as slashing and piercing damage, physical versus earth damage, ranged, bleeding and more. Learning how to use these effects and damage types is a key to successful combat and, unlike some RPGs in which the various types appear to make little difference in practice, in Earthlock it could be the difference between taking off half a monster’s health with a single slash, or taking off a measly sliver with a stabbing attack.

The action of Earthlock takes place in the world of Umbra; the opening cinematic will remind you of Dragon Age: Origins, weaving a tale of an ancient empire of mysterious beings, the Amri, who were lost in cataclysmic events. The after-world is modern, steam-punk, filled with technology and the remnants of magic. There are vast sprawling cities alongside the wilder, ruinous fantasy landscapes we’d expect. Various races occupy this world, from hogbunnies (cute gnome-like characters, half-bunny half-boar) and hammerheads (large, overweight blue people who look like the shark of the same name). Whilst the art style here verges on the cartoonish, the gorgeous sense of colour and texture really brings the world alive. What’s more, whilst some of the creatures are evidently designed to induce the cute factor (a trope of many Japanese games) the dialogue is often witty and sharp, which makes it accessible for adults. There is no voice acting: the interactions are conveyed through speech-bubbles, but this hardly matters. After a few minutes your brain adjusts, and your sense of the characters becomes so clear you actually hear an imagined character voice in your head. Much as in the aforementioned Dragon Age, the interactions between your party members is one of the most rewarding aspects of the game, as are the logs written by the neurotic and polymathic Gnart.

The story is simple, though it does well weaving the narratives of the at first displaced heroes together. It is the world-building, however, that is truly impressive. The world map is large, but it is the fact that the world feels populated and historied which really matters. Travelling between locations is very reminiscent of the map-travel in Summoner, in which a giant version of your character walks across the hills and valleys to the next location. Enemies also populate this map and it is possible to be ambushed in the wild. In many respects Earthlock: Festival of Magic feels like a more upbeat descendant of Summoner, sharing a sense of great hidden depths to the narrative. Hints are dropped throughout the story about the origins of the Amri, their fate, and the mysterious frog peoples, the highest order of race in Umbra, who seem extinct. There are many moments of whimsical splendour in the narrative of Earthlock, and one of them is meeting Frogboy, a child in a cape and frog-hat, whose bizarre ramblings inject a heavy dose of real humour into the narrative.

Where the game falls down slightly is in the finer tuning. Some of the save-points are awkwardly spaced, and in our time-limited 21st century, it is annoying to be forced to keep playing to find the next save point. It is even worse to have to abandon progress. Whilst this is not frequently an issue, there are a couple of instances of it near the beginning of the game which does set a bad precedent. There are also moments when the hard work setting up the universe of Earthlock is undermined by such technical faults as civilians in the city of Zaber walking straight through your character and fizzling slightly. Whilst this never happens with key NPCs, it is frustrating that such a small detail takes away so much from the immersion. One final problem relates to one of the most successful aspects of the game: the puzzle-solving segments. As a further addition to the turn-based genre, there are also parts of the game where you must use Amon’s “Amri Attractor”, a kind of glowing, ancient bracelet, to draw different types of elemental charges into it and then use these to activate levers which operate doors, bridges and elevator platforms. These charges are sometimes claimed from stones and sometimes from floating Amri elementals, which look like serene Chinese lanterns. The problem comes when you walk from one room to another your charge disappears, which leads you to have to be careful about where you kill the Amri elemental, lest it render the charge useless. Luckily, leaving an area and returning respawns all the enemies, so you won’t ever get stuck. Just frustrated. 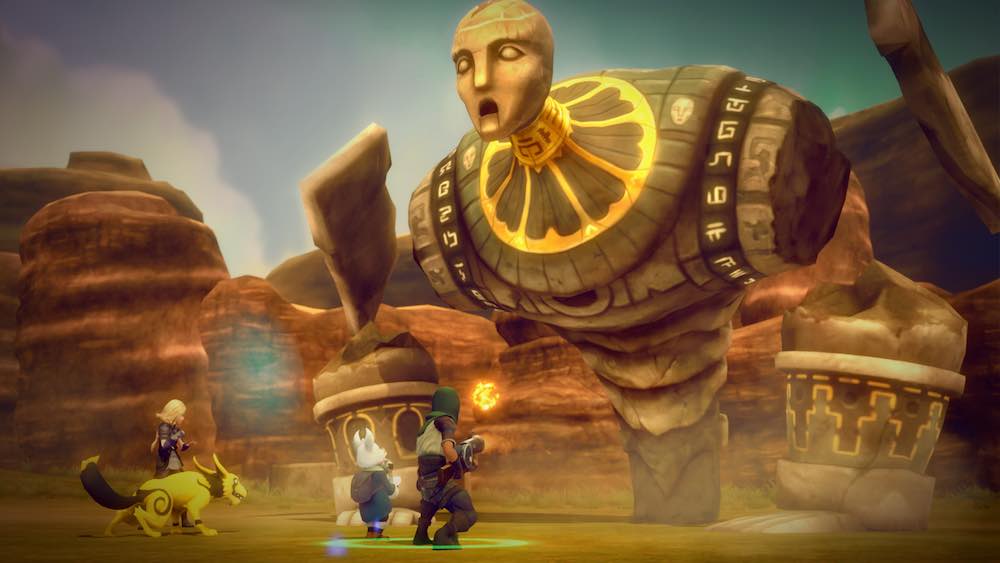 But then much of the frustration of older turn-based games has been averted in Earthlock by the implementation of a unique harvesting and crafting system. Once you reach Plumpet Island, it is possible for you to plants seeds you have acquired on your travels and watch them grow into flowers (they need watering and patience). When they grow, they flower, and you can often harvest useful items from them such as Spuds, which are used as ammunition in your blunderbuss weapons, or Stems, which serve to make crossbow “lances”. Once you have a little garden going, you can start mixing a matching ingredients to create healing potions, explosive ammunition and more. Being able to cultivate your own items (rather than having to grind to find them) is a really excellent addition to the genre and one that will appease both those who love to build and customise (the so-called Minecraft generation) and those who don’t like re-treading areas endlessly in search of supplies.

Overall, all the best aspects of Earthlock can be summed up in its music: hints of the ethereal, the playful and the deeply engrossing, with more profoundly moving melodies each time you listen. Earthlock is not a grand AAA release with next gen graphics, nor is it a strikingly original concept: it has rough edges and elements which could be improved. But, having said all that, I think it is a tremendous achievement and one that you can easily lose yourself in for hours on end, and one that you will certainly feel a burning curiosity to get to the end of once you commit.

Perhaps the best way to put it, is developers Snowcastle Games have created a game I could get nostalgic about now.

Earthlock: Festival of Magic is available on PC and Xbox One. We reviewed the Xbox One version.