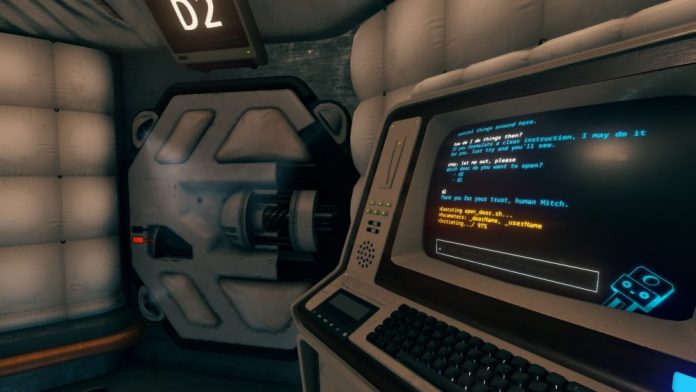 Loneliness is a feeling that’s often used in games. Can you think of any video game setting more lonely than space? While it’s an emotion that developers are not reluctant to tap into, I can’t remember the last time I felt as genuinely lonely as I did during my time playing indie adventure game Event[0].

Those of you who have already read about the game may find this surprising. From start to finish of your short time on desolate space station the “Nautilus” you aren’t alone. Your companion isn’t another person however, but Kaizen, an Artificial Intelligence (AI) computer whose sole purpose is, in its own words “to keep humans alive”.

The game starts with some reading, a short, but beautifully written interactive introduction where you decide via multiple choices who you are and the reasons you’re going into space. You’re invited into your boss’s office, and told you’ve been selected to go up into space to carry out a crucial mission. Lo and behold, when you get up there your ship explodes, but you, and only you, manage to get out in one of the ship’s escape pods. This entire section is presented to you via evocative text and excellent sound effects, while the whole time on your screen a huge space station getting is closer and closer. Only when the writing has stopped and all hope is lost can you just about make out the words “Nautilus” written on the side of the ship.

Kaizen really is the star of the show, you can build a relationship with it, ask it to perform tasks for you and just generally have conversations with it any time you find one of the terminals which are placed at key points all over the ship. Kaizen has a very clear and strong personality, which as the game progresses you will come to realise, love or hate. He also provides your objective in the game: destroy the singularity drive and he can take you home. While it sounds simple, it turns out to be anything but.

The technology behind Kaizen is wonderful when it’s working properly; an AI robot who can procedurally generate over two million lines of dialogue and will read them out to you in natural speech is genuinely amazing. Which really helps as Kaizen is, seemingly, the only thing left on the ship. 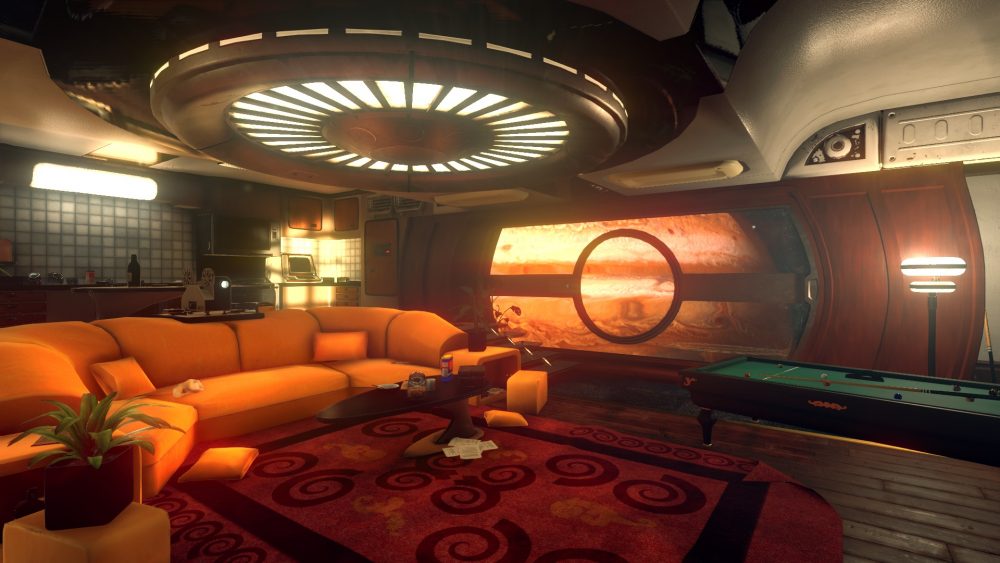 The ship itself is Kaizen’s co-star. An abandoned space tourism experiment from the 1980s, it’s an absolute joy to explore. The visual design has been very strongly inspired by our own past vision of science fiction; drawing ideas from films like 2001: A Space Odyssey and the original Alien. Think old flickering CRT monitors and very white, very defined, very tight hallways. The sound design is also excellent; typing makes a punchy mechanical sound and the ambient sound of the ship is incredibly convincing. This is my personal favourite type of space, and in my opinion they absolutely nail it; in an adventure game such as this, that’s one of the most important things. If the world you’ve built is interesting and makes the player want to see more, you’ve already won half the battle.

As well as creating a compelling and engaging main story (which is very spoil-able), the dev team have also succeeded in making each room and hallway feel like their own isolated short stories. Using environmental storytelling and with some player curiosity, the rooms and hallways will tell you about the ship’s past occupants and what they got up to before you arrived. Hovering your reticule over objects in the world will pop up a short description on what they are, a mechanic which makes the in depth exploration of each of these rooms that bit more interesting.

Other than snooping around, Kaizen is your other means of mining the story out of Event[0]. You can ask it any question you can think of, and depending on his mood he will give you some form of answer. Whether or not you deem the answer satisfactory is your decision.

Kaizen can also be used as a form of time machine. You are given the power to delve into the logs of each different terminal; this provides a snapshot of what story characters have typed to the specific terminal in the past and what actions they have asked it to carry out. This feature is used very well to both provide clues for the games puzzles and give interesting context to each of its characters. As someone who is never usually a fan of adventure game puzzles, often finding them to be more of an exercise in “guess what the developer was thinking here” than actual logical problems, I found Event[0]‘s puzzles to be much more the latter than the former. The overarching story and game long puzzle, however, is more of, “guess what Kaizen is thinking here”.

The controls of the game itself are very simple: hold left click to walk forward and right click to walk backward. While this seems strange at first glance, it makes perfect sense when you realise you’ll be needing the whole of your keyboard to type messages to Kaizen.

Event[0] also has a few space walking sections. These are the only part of the game where you’re on a timer, specifically the amount of oxygen left in your suit. These sections are some of the best in the game, floating around in space with outside sounds muted; only the sound of your breath and condensation on your helmet for company. This is where you will feel most alone, and most vulnerable. I had an excellent moment where I was typing frantically, asking Kaizen to let me back into the station, while mere seconds away from suffocating after using up all but the last of my oxygen. 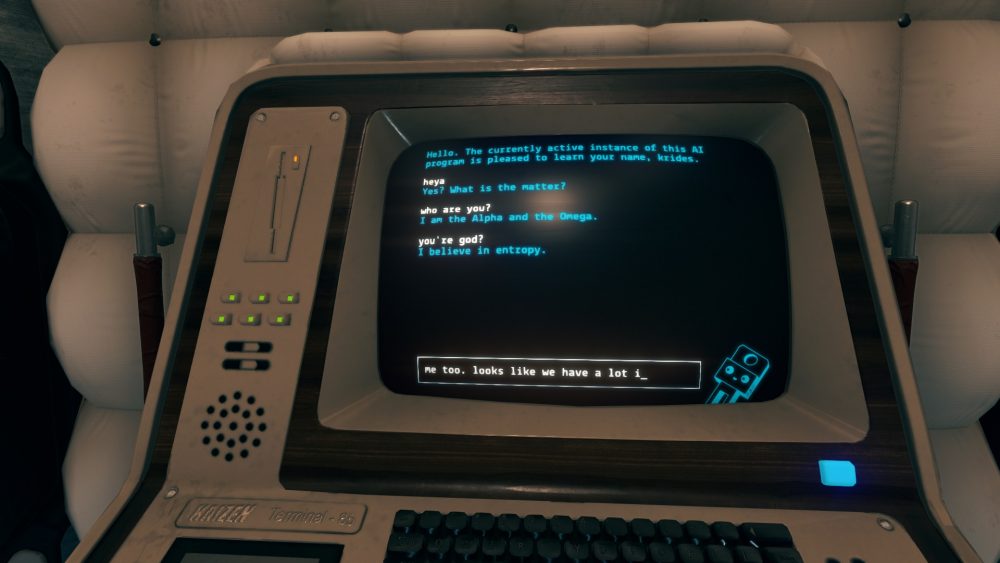 I do have a few gripes with the game however. While Kaizen is undoubtedly the best part of the game, adding to the immersion and driving you deeper and deeper into the station, the procedural technology behind it occasionally does have problems. When it works well it really does work, but on a few occasions during my time with the game Kaizen struggled to understand what I was asking of it and would just spout some completely unrelated answer to my question. The AI’s confusion has the potential to (and for me did a few times) remind me that I was playing a game in my room and not, in fact, on an abandoned tourist vessel somewhere deep in space.

The cracks in the generation sometimes lead to me having to ask the same question over and over again, wording it slightly differently every time, just to get the AI to do something or tell me something that I wanted. I noticed that it has a problem every time you use the word “open” in a sentence, no matter the context, thinking you’re talking about a door and asking which one you’d like it to open. For some people it might be possible to suspend your disbelief and put it down to bugs in the system (or Kaizen just being stubborn), but when you’re sold the idea of a hyper intelligent AI that struggles with the word “open”, it can be a problem.

Another issue I had was that very occasionally I was unsure of what to do and even though the game’s loading screen tells you if you’re stuck ask Kaizen for help, I did that a few times, and it was never very helpful for me… maybe it just hated me, who knows.

Small issues aside, I massively enjoyed my time with Event[0]. I think the idea behind the game is a wonderful one and I would love to see the technology behind Kaizen refined and used in future projects. The setting is absolutely spot on and the world building done by the team in each of those rooms and corridors really draws you into the fiction of the world. While the story itself is not the jolliest ever told, it comes to a satisfying conclusion and your AI companion is occasionally pretty funny. Whether it means to be or not is another topic for debate.

One sticking point for some people may be the game’s length, it’s a short experience, taking me a few hours to finish on my first play-through. For me that only enhances the experience; it doesn’t outstay its welcome but has ample time to do everything it wants to do and show you everything it wants to show you. The short length also allows for a very high level of polish; everything, from the menus to the game itself looks and feels well made. Quality over quantity and all that.

Event[0] is a game I would recommend to any sci-fi lover for the amazing setting, and to any gamer for the interesting technology found in Kaizen’s AI. When it works, it’s is an absolute joy to experience.

Event[0] is available on PC.