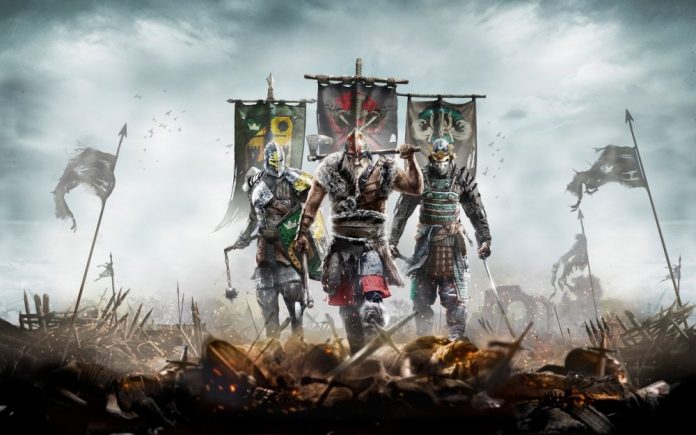 When it was first announced back at E3 in 2015, For Honor immediately seemed to tick a lot of boxes for a lot of people – myself included. Essentially billed as a hack and slash multiplayer game, Ubisoft’s new IP promised slick but hefty melee brawling and tactical one-on-one duels between knights, vikings and samurai amongst the crumbling ruins of a typical fantasy world.

While the latest cinematic trailer goes some way to explain why these three pretty disparate cultures have been thrust together in war (and introduces, presumably, the game’s chief antagonist: Apollyon), Ubisoft’s recent closed alpha test shed a bit more light on whether or not this rather unique prospect’s multiplayer game can live up to all of its perceived promises when it drops next February.

Back in the glory days of the original PlayStation, my friends and I spent some months perfecting the often bafflingly intricate combat system of Bushido Blade, still one of the best and most “realistic” sword-fighting video games ever. So, when For Honor‘s first gameplay video hit YouTube, I got rather excited at the prospect of something that I viewed as the next Bushido Blade hitting current-gen consoles (and PC, of course). But with vikings.

For the most part, For Honor really does live up to the more realistic fighting style I was hoping for (“realistic” in comparison to sword-based combat in other games, in particular MMOs and MOBAs) but, happily, does away with a lot of complexity in favour of the rock-paper-scissors-esque Art of Battle system.

At its most basic, the system allows the player to select from one of three stances from which you can attack or defend. Match your stance to that of your opponent to block a strike and select a different stance from them to ensure that a hit lands. Simple! However, the Art of Battle system is far deeper and more nuanced than that – ensuring that, while easy to get into, For Honor‘s mechanics provide plenty of depth for those players willing to take the time to properly get to grips with it. 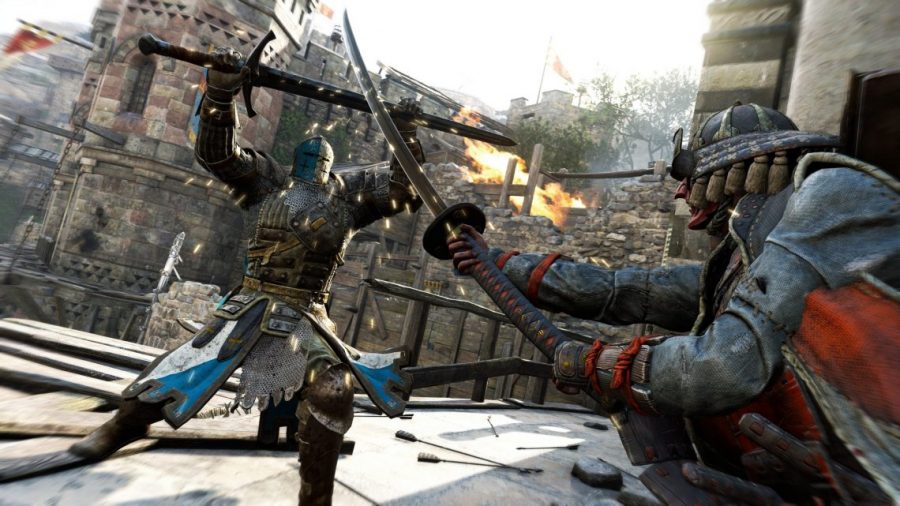 Attacks come in, generally, two varieties – quick and heavy. Quick attacks, as the name suggests, are faster attacks that do moderate damage while heavy attacks take a second to wind up but do much more damage. As players become more comfortable with the combat system, they can make use of additional skills – shoulder barges to break attacks, throws to hurl enemies off ledges or impale them on your viking helm and even feints – fake strikes that can be used to catch your opponent off guard.

Following a pretty well-crafted tutorial in which these mechanics were explained, the alpha allowed players to experience three of For Honor‘s multiplayer modes: the 1v1 Duel, 2v2 Brawl and 4v4 Dominion. Dominion is, arguably, the most fun and involved game mode, requiring players to capture and hold three points across the map while fighting off waves of squishy mobs, not to mention one another. It’s Dominion in which For Honor‘s mix of mechanics really shines and here, too, that you’ll get to use each class’ feats – special powers that are unlocked as you level up during the match.

The 2v2 Brawl mode does exactly what it says on the tin: teams of two players go up against one another in a best of five format – no minions, no control points, just four warriors duking it out together. The issue with Brawl is that the fight typically consists of two duels and whomever loses the first duel dooms their team-mate to a 2v1 situation, which are almost impossible to come out on top of.

Duel is, obviously, the most tactical and skilled multiplayer mode available in the alpha, though. Pitting you against a single opponent, For Honor leaves it up to you and your understanding of the Art of Battle system to decide your fate. Duels are tense, often protracted battles that really stretch your abilities – providing that you’re up against a worthy opponent – and absolutely capture the one-on-one essence of Bushido Blade and, to a lesser degree, fighting games like Soul Calibur. They’re also massively good fun.

However, this is a Ubisoft title and they’ve never been shy of providing players with opportunities to spend some real-world cash to get ahead in their games – vastly reducing the need for skill. Each of For Honor‘s distinct and unique character classes (of which three will be available from the start – the rest you unlock with the in-game currency, “steel”) are customisable by the player. The aesthetic customisations will set you apart from your fellows with various patterns, tattoos, skin colour, etc. that can be applied separately to different pieces of armour (or, indeed, skin) and colour combinations for use in certain situations. You can unlock more of these as you play and level up each indiviual class. 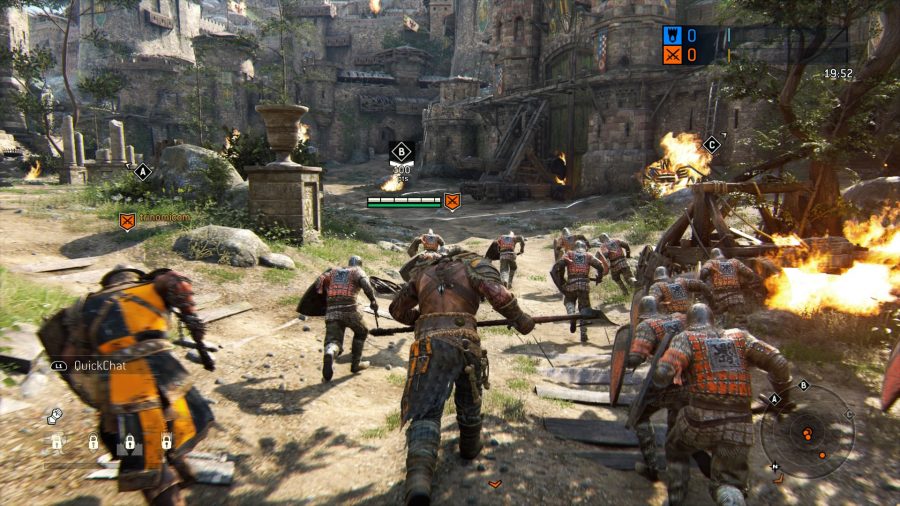 Green and yellow diamonds on your right shoulder are all well and good, though, but it’s the armour and weapon modifications that are the most likely candidates for possible pay-to-win. In the alpha they’re hard to come by just through normal play: you only stand a low chance of scavenging something from the battlefield and, then, only if you’ve been victorious. Equipping these upgrades often augments your battlefield skill – increasing stamina regen, extending the “revenge” state or reducing the cooldown of your feats.

You can also spend a chunk of steel on three random pieces of armour or weapon upgrades, or even more for five items (though one is guaranteed to be a higher class item). This might seem pretty fair but steel is incredibly hard to come by in the course of the game: you’ll only get about 10 for winning a match so you’ll need over 30 victories before you can afford to buy some upgrades. There’s also no guarantee that you won’t receive something that you’ve already got – though you can either break the item down for character XP or use it to augment and level up another item.

Though there are other ways to earn steel (you can, for example, partake in For Honor‘s daily quests for higher volumes of steel and XP) but it’s probably safe to say that executives have already marked the sale of steel as being incredibly lucrative, particularly with a multiplayer crowd who are increasingly happy investing hard-earned cash into levelling their characters as opposed to a little bit of time and effort. Hopefully, further balancing of upgrades and better matchmaking in the multiplayer will help to combat this moving forwards but be prepared for in-game purchase warnings when For Honor is eventually released.

It seems clear from the alpha that For Honor‘s multiplayer will, itself, be a solid draw and more than enough of an excuse for most to stay excited about the game. Not only does the Art of Battle system provide a unique take on melee combat, it is at once easy to grasp and difficult to master. Other classes and a wealth of customisation options lend much-needed depth to what could, otherwise, have been a pretty shallow experience. With beautiful graphics and typically awesome audio, For Honor looks and sounds the part, as well.

It remains to be seen, though, if For Honor can conjure up an engaging and equally bloody single player campaign but, even if it doesn’t, For Honor is set to be an excitingly unique experience amidst the tired tropes and mechanics of most multiplayer-focussed games today.