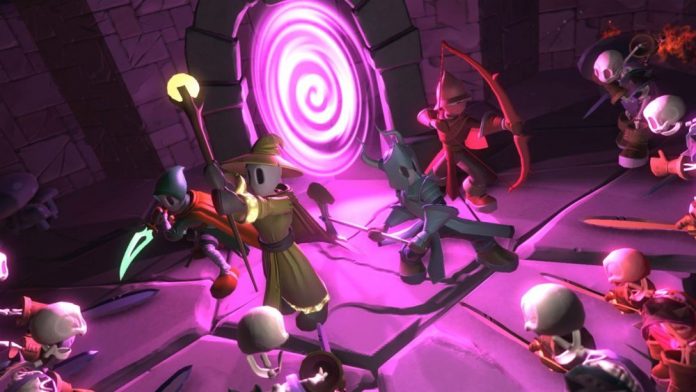 One of my very earliest video game memories is seeing a huge 4-player Gauntlet cabinet looming over me from the end of a dimly lit arcade at Butlins in Margate.

I could barely reach the controls but the beautiful artwork, colourful visuals and, especially, the speech booming out of those huge stereo speakers had me mesmerised. At the time I had to put up with watching my dad play, it but a few years later it would become one of my favourite video games and remains so to this very day. So when I saw the Gauntlet-esque dungeon crawler Hack, Slash & Backstab listed in the Xbox store I got quite excited. Question is though, can it live up to the mastery of Atari’s classic arcade game?

Talking of Gauntlet, at first glance Hack, Slash & Backstab looks quite similar to Warner Bros. Interactive’s 2014 reboot of the classic franchise, upgrading the dungeon crawler genre from an overhead 2D experience to a full blown 3D one. Like Gauntlet, it also very much focuses its gameplay on a multiplayer experience. In fact, it’s a certain element of the co-op game that is Hack, Slash & Backstab’s key selling point.

Once again taking its cue from Gauntlet, the object of the game is to get through each level by fighting off the monsters and making your way to the exit; only Hack, Slash & Backstab takes the competitiveness one step further as whomever reaches the exit first is deemed the winner. That’s not all though, as you can also take out the other players with your weapons too, bringing a whole new meaning to “friendly fire”. Playing this game with others will leave you very much torn; working together is the only way you will make your way through Hack, Slash & Backstab, but you can’t win without taking them out! 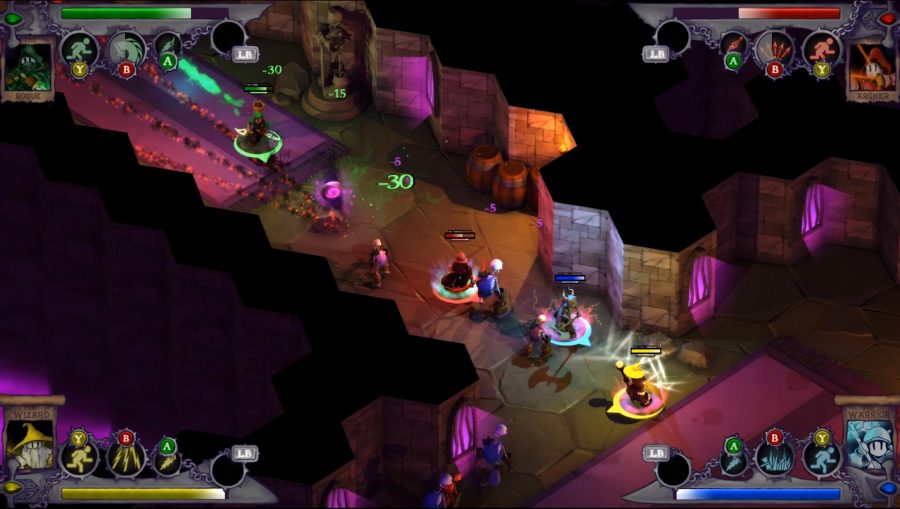 Hack, Slash & Backstab is absolutely relentless from the off, enemies constantly re-spawn, attack in hordes and quickly trap you if you don’t keep moving. You can grab power-ups that will improve your standard weapon as well as collecting magic potions and all-important health, but all they will do is stem the flow slightly because this game is incredibly tough. If you don’t have any friends to play with, then it’s even tougher! Surviving on your own for more than a few levels is nigh on impossible; you will just find yourself using the dash button constantly to run away from the enemies in search of the exit rather than battle them, and in all honesty this kind of defeats the purpose of the game.

There is no doubt that Hack, Slash & Backstab contains all the ingredients to make a very fine solo experience, but it’s just far too tough to do anything other than frustrate you. Even in the intended multiplayer mode it’s still too hard for its own good. By far the biggest problem with Hack, Slash & Backstab is the re-spawning enemies, something that is never welcome in video games. In Gauntlet you have monster generators; you destroy those and no more monsters come. That pretty much became the standard for all dungeon crawlers from then on. In Hack, Slash & Backstab enemies appear from nowhere, fill up the entire room and kill you within seconds. Not just annoying grunts either; huge boss size creatures attack in number that are almost impossible to defend against!

I so wanted to like Hack, Slash & Backstab. I played it over and over again, trying to convince myself it was a good game and that I would get better with time or once I leveled up my character. Unfortunately, neither of these things ever happened and I am just left feeling disappointed that Magic Spell Studios chose to make this game as hardcore as possible. The controls don’t help matters much either, as you constantly need to face the direction you are shooting – kind of inexcusable in the twin stick era.

It’s a great shame because Hack, Slash & Backstab has some lovely visuals with its dark, brooding dungeons and lovely lighting effects. It also has lots of great ideas, especially when you are playing with three other friends. Unfortunately, the hardcore difficulty is just too unforgivable, and I can only really recommend this game to those who either have lots of friends or enjoy being punished.

Hack, Slash & Backstab is available on Xbox One and PC. We reviewed the Xbox One version.