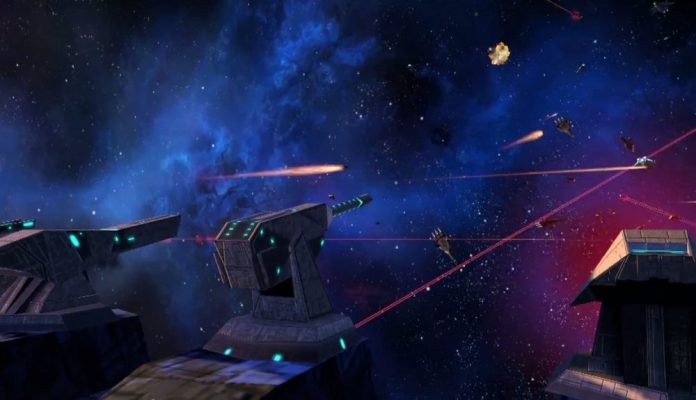 Tower defence is a weird genre.

There’s so many permutations of it that’s it hard to draw clear distinctions sometimes. In a way, most strategy games are a form of tower defence: it requires knowledge of unit types, what they counter, what they’re countered by, their positioning in games where their location modifies their attributes and stats, etc. The only thing that differs between any kind of regular combat strategy game and a tower defence is immobility. You are sunk into your position, and you have to survive wave of oncoming enemies. Infinium Strike is that kind where you have your position and you must defend it.

Humanity has enjoyed many decades of space travel, but are eventually stumbled upon by an alien race who ignores every peaceful attempt humanity has made with them. To survive the alien horde, mankind built a massive ship with on-board hangars and four platforms for residing turrets. All four edges of the ship are blank slates, so you as the player have the ability to choose from just over half a dozen turret types to combat waves of alien ships slipping their way through distant portals and advancing on your ship. Each side of the ship can be attacked by three types of enemy waves: white, orange,or red, representing zones 1, 2, and 3 respectively. Think of zones as merely being distance, where you’ll need certain types of turrets to attack certain zones effectively. For instance, you can have a zone 2 pulse turret attack zone 1 type enemy ships as they cross zone 2, but once they enter zone 1, you really should have zone 1 turrets to take them down effectively.

So you’re juggling between three zones, where each enemy type will hover and reside in one of them, with the colour of their portals signifying which will be emerging from them. To help you on your way are various powerups that come in two types: ships and utilities. The utilities are straightforward, and range from things such as restoring your shields to maximum (the only thing protecting your armour; when it reaches 0 it’s game over!) to gaining more resources from kills to build and upgrade turrets. These are on cooldown, and require you use them at the right time or risk finding yourself in a situation where you need them even more in the next wave. The ships are also coded for different zones much like the turrets, so you send them out, and they go out to clear the zone of enemies, and eventually disappear, meaning they are not permanent defense options like the turrets.

Although the turrets aren’t permanent in themselves either. They can be evaporated or stunned by enemy projectiles, and you also need to keep up your defence with various missile turrets – which is another balancing act you must perform to keep certain projectiles from reaching the ship. If this all sounds confusing, it’s because it is. The radar screen quickly shows all four sides of the ship swarming with red enemy outlines, and you aren’t always sure which sides of the ship have what kind of turrets unless you pay close attention. If you’re the kind of person that can’t multi-task or keep on point with developing situations closely, then you’re going to hate Infinium Strike. You have to watch a timeline bar in the bottom left for what kind of portals will soon be spawning on which side of the ship, and then you need to time builds and manage upgrades effectively for the sides of the ship that need them most, and also replace turrets that have been evaporated, or need to be replaced by a different type of turret. 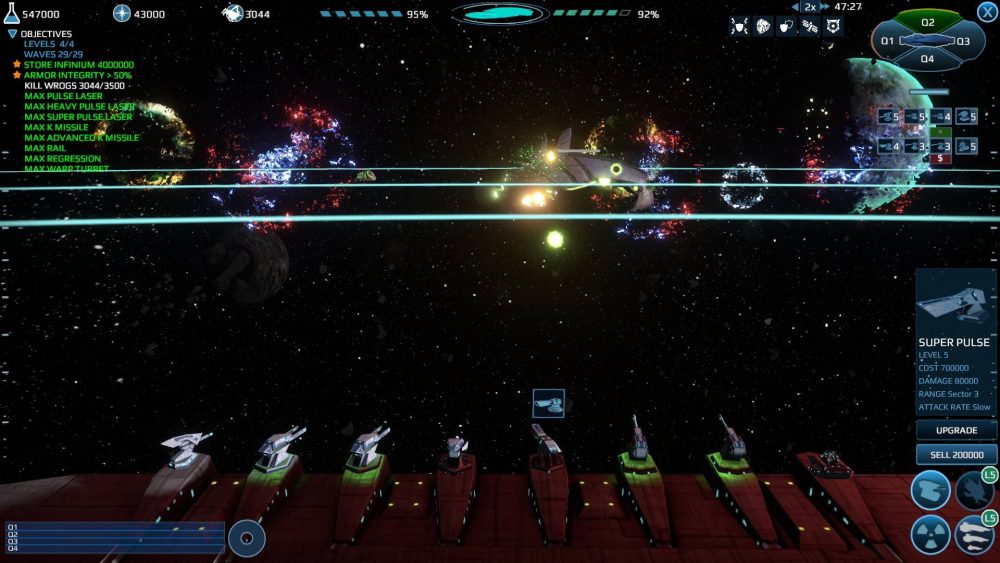 The game is notoriously difficult. I played the missions on the easiest difficulty and still found myself becoming overwhelmed, despite understanding the ruleset. The game’s problem lies in both being too simple, and trying to accomplish too much. Whilst Infinium Strike is very much reserved in the tools it gives you, keeping things to a bare minimum, having you watch four different areas to your ship, track a timeline of when portals will be spawning in as well as juggling the different unit to turret counter types that you’ll need to build, everything can quickly become overwhelming. One mistake means a domino reaction where you end up desperately trying to salvage one side of the ship, whilst neglecting others and allowing them to collapse in the process.

The soundtrack isn’t anything spectacular, and almost embarrasses at points, where brass instruments sound midi-like in nature, as if they were ripped from a very early PS1 JRPG. Sound effects are serviceable, but don’t signify any gameplay uses beyond letting you know the rhythm of your turrets firing. Not much is done audio wise to warn you of certain dangers, and an announcer simply stating “Turret Vaporised” isn’t going to tell you which one it is, or at the very least, which side of the ship it occurred on. That’s actually a very apt overall example of everything that’s wrong with the game. It’s very vague, and requires the utmost attention paid to be able to engage with it even on the most basic difficulty. A timer to detonation (no idea why, energy issues for sustaining the systems that long?) means you’re also under pressure to not only produce a setup that keeps you well defended and cleans out sectors, but does it within a reasonable time-frame as well.

All in all, the only word that comes to mind to describe Infinium Strike is “serviceable”. If you’re a fan of the genre, just make sure you’re able to multi-task, as this isn’t a simple, run of the mill tower defence game. This is a hybrid of puzzle game and real-time strategy. In trying to be different, it becomes interesting enough that fans of the genre who are able to cope with the mental acrobatics will find something new and interesting here. It’s a game that requires adaptation, careful planning and keen awareness. If you feel that static/simplified tower defence games are a bore, and you find yourself simply following a basic formula/pattern for each round every time, then maybe Infinium Strike is what you’ve been looking for. It keeps the mechanics simple, but pushes you to the limit by swarming you with units, which can’t be overcome by the right combination of turrets alone, and requires the right timing of powerups, and the balanced/timely launching of ships to get through a mission.

You can’t just outpace the game by building the right combination of turrets; the game forces you to use everything at your disposal to simply survive by the skin of your teeth. The great thing is, if you still find it too easy, there’s more difficulty modes to push you even further. The problem for most people people will be its difficulty spike; even on the lowest difficulty Infinium Strike is notoriously difficult. Because you’ve been trained over the years to play tower defence games in a particular way, by looking at each enemy type coming, building turrets and upgrading them to their fullest, you expect there to be a magic solution/formula here too. Well, there isn’t. 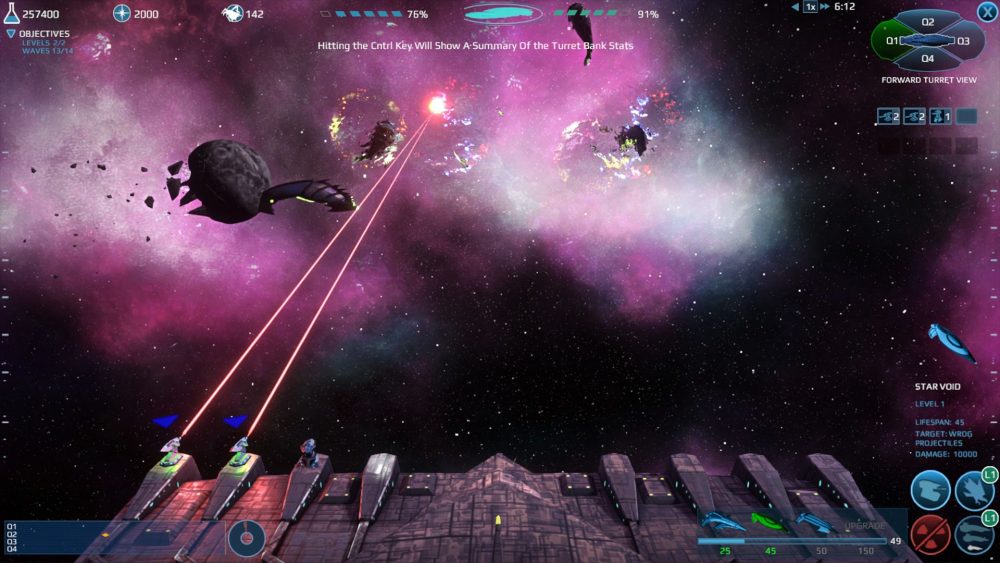 Infinium Strike won’t be won by finding the right combination of turrets; you have to engage with the game and be dynamic in your approach. You can’t sit back and let the turrets do the work for you – you have to be involved as a real-time player, watching situations develop, and step in at the right time. It’s a refreshing approach that comes away from the typical repetitive slugfest of the genre where you place your setup, start the round and let it play out, hoping you reach the end, and using an online guide if you can’t figure out the correct pattern yourself. If a game like Crystal Defenders is the purest form of “There’s a correct pattern for this level” form of tower defense, then Infinium Strike is as far away from that kind as possible, feeling more like a real-time strategy game like Age of Empires.

I wish there were a few improvements here and there, like making it possible to see every turret type on every side of the ship at once on the radar, but I suppose those are deliberate decisions to make the game harder and more frantic. This is humanity’s last stand after all, and this ship is all that stands in between them and the alien race’s victory. If you relish a challenge, and welcome the difficulty curve as well as its different style of approach for the genre, then you’ll find something unique that pushes you as a player. Whilst Infinium Strike doesn’t do anything to amaze, it does enough right that you won’t regret handing over your money.

Infinium Strike is available on PC.