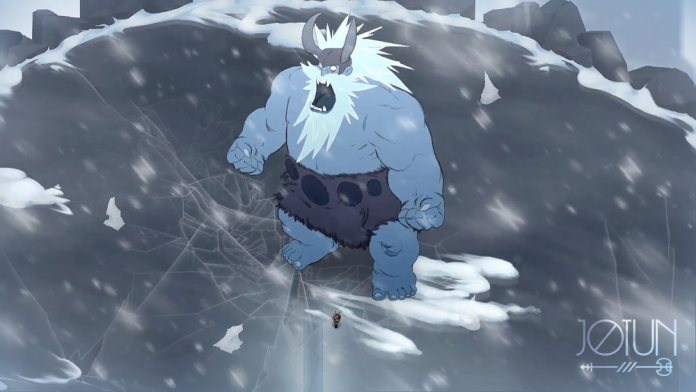 For a strong Viking woman like Thora, who’s been through many hardships that would simply crush the everyman, entering Valhalla is everything.

So imagine her despair when her life is cut short by an inglorious death. Finding herself in Purgatory, Jotun is the story of Thora’s quest to impress the Norse Gods by defeating them in combat. It won’t be easy, but if that’s what it takes to allow her travel to Valhalla, she will not rest until it is done.

Developed by Thunder Lotus Games, it’s obvious from the very outset that Jotun has had a huge amount of love poured into it. Its hand-drawn sprites are detailed and wonderfully animated. Its environments excellently realised. It’s like playing the leading role in a classic (albeit violent) Disney movie. And the soundtrack is even more impressive, bolstering every moment of adventure and combat with an appropriately rousing piece to draw you into Thora’s plight. Honestly, if Jotun was to be judged by its audio and visuals alone, it would be a straight up 10/10. Unfortunately, the gameplay doesn’t quite meet the standard of its presentation – but it’s still rather good.

As is becoming increasingly common, Jotun is an action-adventure game in which you access levels via a central hub. Able to travel to five distinct areas at will, your task is to find the two runes lying dormant within each and activate them, unlocking the stony doors that bar your way to a God. What’s surprising is that there’s very little combat involved. Instead, emphasis is placed on exploration and light puzzles, creating a fairly laid back and thoughtful experience for the most part.

You’re rewarded for taking time to go off the beaten path, with collectables such as Ithunn’s golden apples which permanently increase your health, and shrines to the Gods which grant the acquisition of new skills. Despite being fairly bereft of combat though, the surroundings you find yourself in are rarely free of hazards. Lightning strikes, snow storms and giant angry eagles are just a few of the obstacles you’ll have to overcome, and whilst they offer some invaluable gameplay variety, sometimes they feel just a little unfair, with not much clue or warning given to avoid incurring their wrath. 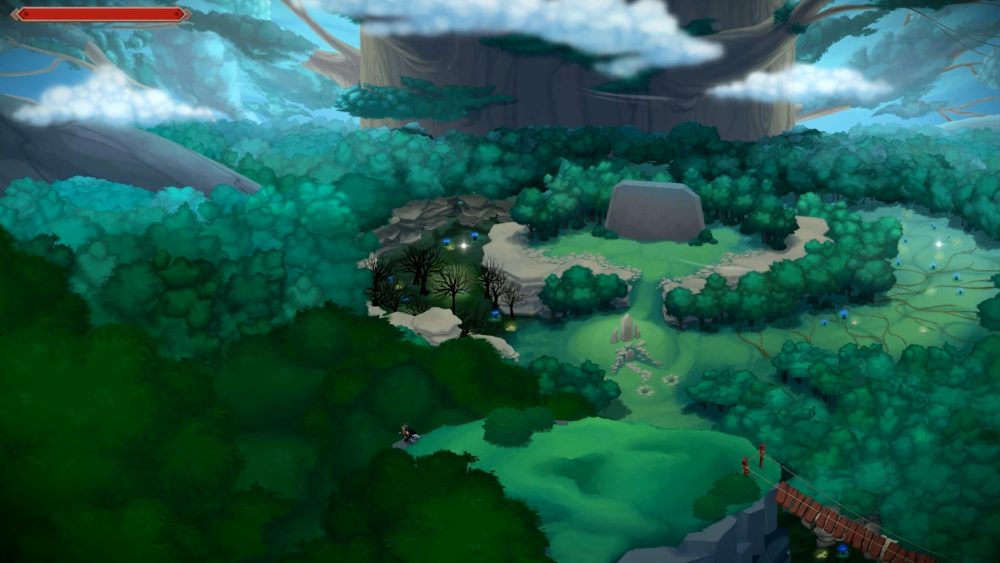 When you do find yourself engaged in combat, it is unfortunately very basic. Armed with just your trusty axe, you’re limited to a slice or a chop to dispatch your foes. Even then, the delayed animation of the chop attack means that it’s fairly useless in battle apart from destroying or manipulating objects that require the extra grunt it carries. Some combat depth and variety is afforded, however, by the range of skills acquired on your adventure. Frigg’s Healing, for example, is your typical restorative spell, while Heimdall’s Shield can protect you from damage. And when it comes to being on the offense, Thor’s Hammer and Odin’s Spear can be used to effectively inflict pain on your victim. Skills have to be used with grave consideration though, as you can only activate each one a few times at the most without visiting a restorative shrine or dying. Speaking of dying, the chances are that you’ll do it quite a lot, but with a rather generous checkpoint system it never becomes a hardship.

Without a doubt the highlight of Jotun is also its raison d’etre: spectacularly epic boss fights against gargantuan Gods. Challenging but fair, each thoughtfully designed and immaculately animated boss requires patience and skill to overcome. You need to study and learn their attack patterns, looking for openings and formulating an effective strategy to topple them. Despite your limited moveset, they remain engrossing and enthralling encounters, worthy of the price of the game alone. Jotun’s bosses offset the mostly sparse adventuring elements perfectly, and upon victory you’re treated to Thora recounting important moments of her life, voiced beautifully. And for those that want more God-slaying action once they’ve finished, the new Valhalla Mode makes them even more ferocious.

Jotun: Valhalla Edition‘s high difficulty bar will undoubtedly be a barrier to some players, and the basic combat is unlikely to impress, but it still remains a wonderful game. Thora’s tale is harrowing, motivating you to attempt to give her the peace and glory she seeks. The boss fights are masterfully created bouts where patience and timing and flourishes of ingenuity win over frenzied attacks. Most of all though, Jotun feels unique. It’s got a character all of its own, drawing you into its world and captivating you until its very end. If that’s not enough of a reason to give it a try despite its missteps, I don’t know what is.

Jotun is available on PC, PS4 and Xbox One. We reviewed the Xbox One version. 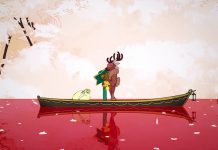