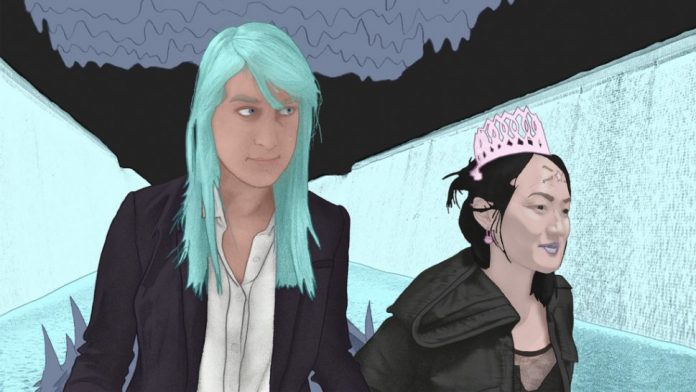 One Way Trip is barely a game, at least not in the conventional sense. Instead it is a unique experience that truly takes your breath away – if only the story could do the same.

One Way Trip plays out as a visual novel with chosen paths of dialogues that change the way the plot develops. In terms of gameplay it is extremely limited, but this is a visual novel so that is to be expected. The game is essentially a story that unfolds and gives you some choices to make to change the course of the world you are visiting.

This world is crazy. Absolutely off your head crazy. It intends to replicate the experience of taking hallucinogenic drugs. That end is achieved absolutely. By that I mean as soon as I selected One Way Trip from the PlayStation 4 menu screen I felt like I was in a John Lennon wet dream surrounded by the cast of Skins. Visually you are struck with a psychedelic contrast of colours, constantly barraged by crazy designs and backgrounds that knock you a bit off balance. The character models themselves truly stand out to give One Way Trip something akin to “charm”. They look like cartoonised photographs, giving the game perhaps its only root to something of this world.

One Way Trip‘s soundtrack comes in the form of a very earthy and abusive hip-hop/rap music that plays throughout. It is very aggressive on the ears, and it’ll be something you either love or hate. Either way, it helps add emphasis to the crazy nature of the visuals. You truly feel that you are on some sort of drug trip and that you can’t trust what is being presented towards you. 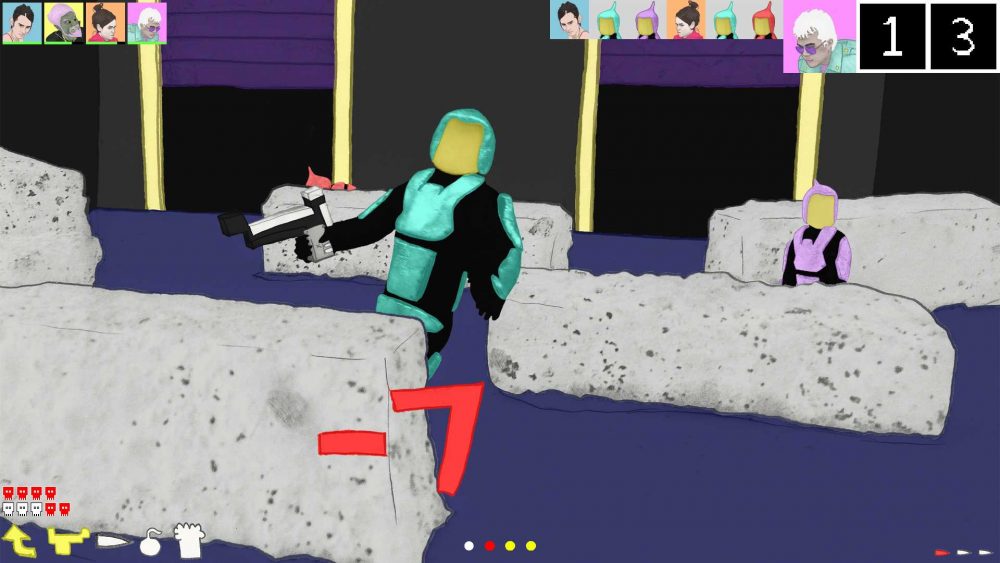 The narrative of One Way Trip follows college student Gordon, who has just found out he has six hours to live after being poisoned. It turns out the water supply has been spiked with a poison that generates hallucinations. Your mission is to find out what to do with your short time left. Do you stay in the comfort of your student halls, or do you try and rally to go find a cure? On paper, it sounds like the perfect premise for a game where everything is slightly out of phase, leaving you ready for a grand adventure that truly challenges the existential pressure of death certainty. Unfortunately, all I actually got was pointless randomness.

You never feel in control in One Way Trip. You feel like a passenger who is taken on a ride – a ride that fails to excite you. Dialogue makes up around 90% of the experience, and it is poor at best. While it does replicate the (at least stereotypical) sub-culture of the Californian stoner fairly well, it does little to differentiate the several characters that you come across. They all speak in such a similar way that most of them lack any real depth, crippling any existential questions that the game attempts at making. You are too removed from reality and have no attachment to the interchangeable characters to truly care about their morality or mortality. The whole time you feel you are playing through a disjointed connection of apparitions that tie a loose story together, all a bit too far removed to create any meaningful attachment.

Occasionally out of nowhere you are taken aback by a character suddenly having a comment that surpasses the words “word” or “fuck”. They try and make an observation about the state of nature and life itself, but it feels so out of place that it may as well be from a text book. Like you have been hit by a sign that says, “LOOK! THERE IS A POINT!”. Despite its premise, One Way Trip doesn’t really go that deep either; the dialogue just seems like the nonsense that drunk strangers spout at you when you tell them you study philosophy. It’s a real shame since the set-up of the story almost comes close to really getting at what death actually means to people on the brink of their demise. But the lack of empathy to the characters and the sheer absurdity takes you away from the most interesting and thought-evoking central point of the story. It should be the concept of death, not drugs, that’s driving the plot forward.

Though the audiovisual design of One Way Trip does a great job of delivering a unique experience, the world as a whole is a bit too much – for me at least. Perhaps if you identify with that sub-culture or take drugs while playing it you will be able to immerse yourself into the game; maybe then you will be able to see past the craziness and form a bond between the characters and care about their fate. Unfortunately, I couldn’t. It therefore only achieves one of its goals: to make you feel like you’re on drugs. It’s a shame that the bad dialogue, misguided plot and uninteresting characters bring this game down far lower than the superb art and audio style deserves.

One Way Trip is available on PS4.