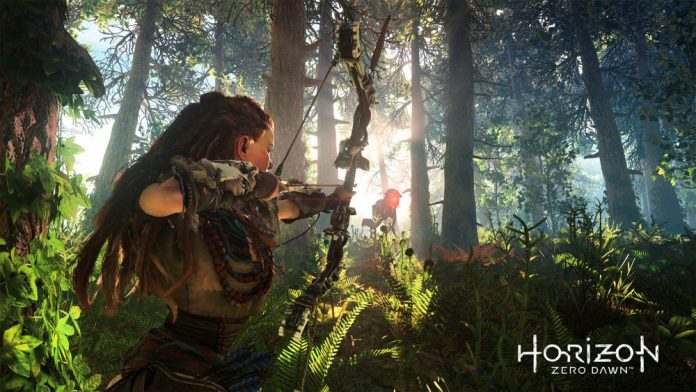 Of the many, many, big and burgeoning titles on show at this year’s EGX, one of the most hotly anticipated must surely be Horizon: Zero Dawn.

It’s got everything going for it: A massive developer, it’s a console (PS4) exclusive so it’s got SONY publishing it and to top that off, there’s loads of post-E3 hype. So for GameSpew to finally get our grubby hands on a playable version, a WORLD FIRST in fact, we can safely say that “excited” didn’t quite cover it!

After what felt like an eternity, our appointment time rolled around and we met with Horizon: Zero Dawn‘s developer, Guerilla Games, known most famously for the generally superb Killzone series and we were treated in style, to a new trailer showing us a little more of Zero Dawn‘s world. Specifically, we learned a little more about the lead character, Aloy, as we heard a mysterious voice tell her “Your whole life you’ve been searching and the others have been holding you back…” before ominously stating that “Earth is ours no more” which seems to be the theme of the game.

After the new, introductory trailer, we were treated to a pretty exciting live-demo with one person playing as another narrated in real-time. This didn’t go totally according to plan which is sometimes preferable as it can take away the idea that it’s staged in any way. Yes, of course they knew where certain items or enemies would be, but when the battles became a little messy, it was far more fun to watch them scramble around as any of us would, rather than watch a perfect, step-by-step recording play out for us, but I digress.

Aloy begins by trundling off into the wilderness before being warned that there are “corrupted” machines nearby. Unfazed by the idea, Aloy uses her hunting prowess to stalk her prey. Crouching into a patch of long, waving grass, she skulks behind her target. She watches as a slow-moving Broadhead – a kind of mechanical Yak – grazes peacefully nearby. A few methodical manoeuvres later and Aloy uses a “focus device” to scan the nearby area before continuing. This focus device is a bluetooth-like tool attached to the side of her head which, when activated with a press of R3, will scour a dome-shaped area for machines, plants and other items of note. It can also be used to track machine’s patrol patterns and identify their weaknesses. Aloy spots a few Watchers in the background, patrolling to protect the Broadheads from hunters like her. We are told that each machine exists as part of a greater eco-system and that none exist without purpose, with each one inextricably linked with the other machines in their ecology.

There are many options open at this point, she could simply sneak past this herd of she could attack head-on to try and collect some of the scraps left after fighting, but Aloy wants to capture the Broadhead and use it as a mount to ride to the next objective. She could walk, but in such vast environments that could take a while. To do this, we watch as she patiently waits for a window of opportunity; the Broadhead nears and the Watchers follow their patrol routes away from her hiding place. We wait. Then, like a coiled python she strikes, pinning the Broadhead down with her Rope-Caster before moving in to hack its circuits. Hacking a machine can do one of a few things, depending on what kind of machine you’re hacking. A Broadhead like this or something similar can be mounted and ridden around, affording you greater traveling speed whilst still allowing you to fire your weapons the same as if you were on your own two feet. Hack one of those deadly Watchers, however, and you can even the odds by having them ally with you on the battlefield. Each of these can be used tactically but you must first disable your prey, before moving in and if you don’t fancy hacking, you can instead deal a lethal blow with a tap of R1. Whatever action you choose will earn you experience points which can be spent evolving Aloy’s skill tree to improve her rating in the 3 branches named either Prowler, Brave or Forager. The exact details of these have yet to be revealed, but whatever you are imagining for each is probably correct; I’d certainly suggest Prowler would up your stealth tactics, Brave would be strength and Forager your various environmental abilities, though I can’t say for sure.

As Aloy rides away on her new steed, she spots some Shell-Walkers. These very large, very slow creatures are heavily armored, with a shield appearing to cover them under-duress, but they hold a bounty on their back in the shape of a large container. A powerful but accurate shot from an explosive arrow sees the container detach from its host, giving Aloy a fleeting opportunity to loot from it without being spotted. Fortunately, she stays hidden and avoids combat with these tank-like machines, both sides living to fight another day.

Now Aloy has collected some currency from the container, she can exchange it for goods from a local trader. The currency in the region can vary but generally Aloy’s people deal with metal shards which can be found, earned or collected from the bodies of defeated machines. In one of a few ways that Horizon: Zero Dawn is similar to recent Far Cry titles (no bad thing, I’m sure you’ll agree) these shards can be used to craft weapons or traps to hold in one of your 4 quick-inventory slots, or you can deal with traders, who can offer weapons, ammo and items like clothing in exchange. Aloy selects a new outfit which is better prepared for the threat that lies ahead.

This whole time, you can’t help but notice how fantastic the game’s world looks. There are vistas in every direction as though every inch has been painstakingly arranged to be the most beautiful environment imaginable. A babbling brook runs through the centre of the valley with lakes at each end. Golden brown trees bob around gently and blades of grass rustle in the breeze. The whole of the region looks almost hand-painted and seamlessly beautiful. The only complaint I had on this was that if Aloy stood still, and you really looked, the grass looked a little bit like seaweed, floating upwards and swaying with the current. If that’s what it takes to make the grass look so realistic while you’re moving around, however, then that’s more than OK with me and truth be told, that’s me nit-picking to the extreme and besides, with 6 months of development time left, this may well be polished out by then.

Anyway, before speaking to the merchant, Aloy encountered another member of her tribe who warned her about a “demon” that would kill her if she carried on. This conversation was a good way to showcase the conversation system which operated in a similar way to Mass Effect, with a conversation wheel appearing at the bottom of the screen for you to select your response. This was used to explain that Aloy, not believing in demons, was going to carry on to find this “demon” and to put a stop to its rampage. What she found was a huge creature, almost a Scorpion in appearance, called a Corruptor. We were told that these Corruptors were from a different part of the world and part of Aloy’s quest would be to find out more precisely where they came from. Corruptors roam around and as the encounter the wild machines of the region, they corrupt them, turning them from gentle pack creatures into ferocious fighters.

A few of Aloy’s other weapons are shown here, as she uses her focus device to identify that this new machine is vulnerable to fire. She then uses fire-tipped arrows to drive up the creature’s temperature. A few traps are laid and eventually the damage done exposes its core and a swift and accurate arrow takes the beast down with a single, powerful strike.

This crescendo concluded the live-demo and left me feeling very excited about what’s to come from Horizon: Zero Dawn.

Once this had wrapped up, we were shown through to a room with playable versions of a fairly small area of the game (the full size of the game’s map had yet to be revealed), running on standard PS4 systems and (I had to check) non-HDR TV’s. The picture looked so good I had to double check both of these things!

As Aloy moves around, you can feel the smooth control over the varied terrain and we marveled at the beauty of the environment. Terrific draw-distances and no perceivable pop-up, with objects naturally appearing when, where and how you’d expect them to. Again, the grass was gorgeous as Aloy ran about and the long grass swaying around looked spot-on. The character models of Aloy and the machines also look superb with a few little critters hopping around, helping to breathe some life into the wilderness. We just want to remind you that this was all running on a standard PS4 which was hooked up to a non-HDR TV. While the version we saw being played on a PS4 Pro was breathtaking, this version left nothing to be desired.

To summarise, the time we spent with Horizon: Zero Dawn was a fantastic experience. Open-world RPG-lites may not be Guerrilla Games’ previous forte and so the idea they could make one of the most exceptional looking titles in this genre is remarkable to say the least. But that’s exactly what they’ve done and they’ve done it with style!