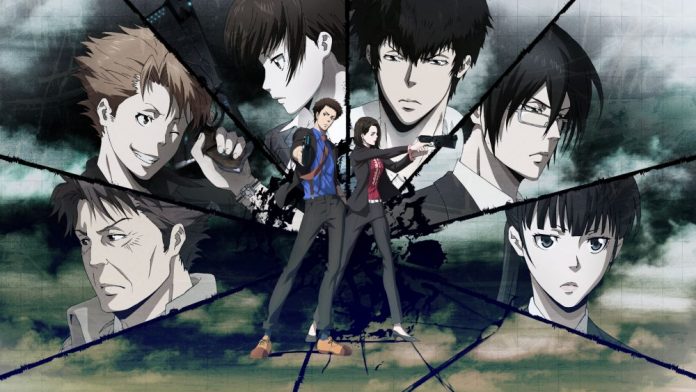 Set in the universe of the popular anime series, Psycho-Pass: Mandatory Happiness is another visual novel designed to force the player to think.

What is justice? And what is most important, freedom or safety? Do they even exist? If the power of God was within our grasps, should we instead walk away? And, more importantly, why can’t I see some damn action!?

Psycho-Pass: Mandatory Happiness is another chapter within the Psycho-Pass anime. Set in the middle of the events of the first quarter of Season 1 (thankfully), Mandatory Happiness allows us to sit down with a few fan favorites from the series and solve a head-scratcher or two. Actually, that might be hinting at a bit too much player involvement. No, in reality, all someone actually will do is “Press X” every other second.

Set in the year 2112, a justice system called Sybil actively measures the populace’s mental states and personalities, and deduces the probability of that individual committing a crime. The resulting assessment, which presents itself in the form of a brain scan, is called the Psycho-Pass. Once complete, this rating is compared to the Crime Coefficient to see where that person ranks. If their level is deemed beyond salvation, that potentially completely innocent person is hunted, captured and possibly killed.

The anime and game centres around a police team, Unit One, from the Public Safety Bureau’s Criminal Investigation Division as they investigate cases, deal with the harsh grey areas of the system and struggle to not cloud their own Psycho-Pass. To further complicate matters, the unit is divided into “Inspectors” and “Enforcers”. The former, including Akane Tsunemori and Nobuchika Ginoza, are the typical police detectives which make all the calls and should provide a level head to proceedings. They are the ones still in control of their lives. 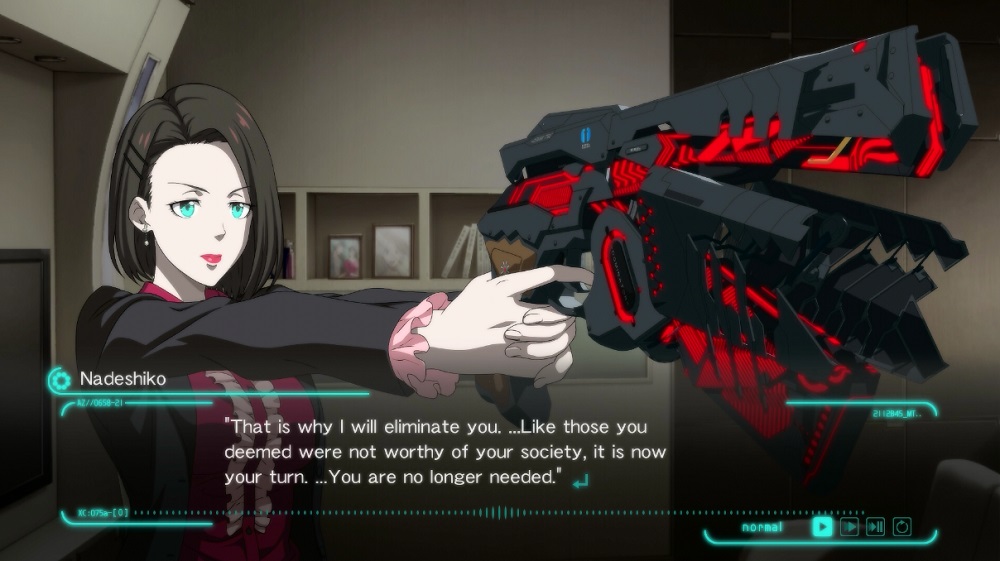 On the other hand, “Enforcers” have already been marked as beyond saving; criminals that have been put on a leash and told to do their master’s bidding. This dynamic between the characters is one of the highlights of the game, (and series) with each one of the ten main characters not only being well designed but also have compelling story arcs and character traits. The only exception is the anime lead character herself, Akane, who seems to be only there, at least for the majority of the first season, to ask “Is this really right?”.

In some ways, the game improves on that shortcoming by introducing two new protagonists, with their own personal stories, for the player to choice from. Inspector Nadeshiko Kugatachi, who is suffering from amnesia, or Enforcer Takuma Tsurugi, who is searching Tokyo for an old lover. Although neither one of these characters is particularly interesting, or unique, they effortlessly fit into the dynamic set up by Psycho-Pass, making Mandatory Happiness feel like a genuine part of the serious rather than a lost chapter.

The game is divided into a variety of chapters, with different cases to investigate. Although most manage to achieve that serialised appeal, the threads are connected by an overarching story focused on a child A.I. named Alpha. This character perfectly encapsulates the main appeal of Psycho-Pass: the villains would be the heroes in most other shows. Alpha’s main goal is to make people happy. Sure, his actions are often criminal, but his motivation is pure. This contradiction makes him one of the most compelling antagonists of the year. And you bet I am not talking only about video games.

That brings me to the biggest flaw of Psycho-Pass: Mandatory Happiness. It is quite a stretch to call this a “game”. It barely qualifies as a visual novel. Despite the fluidity and adrenaline associated with the anime, 5pb’s release is pretty much a series of static images with characters slapped in the front. Movement is a luxury. Admittedly, the story and dialogue is often fascinating, but the intensity of the situations are rarely properly reflected by the visuals. Unlike some other visual novels, there are no puzzles or breaks of actual gameplay. “Press X to Continue” is the most one will do, and even that can be turned to auto. 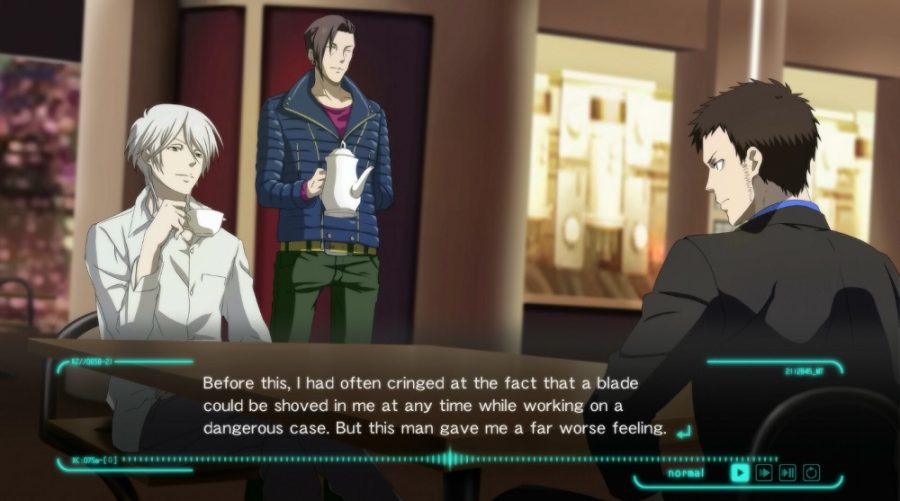 There are choices, as once in awhile the player is allowed to make a decision for his chosen protagonist. Saying that, these do not really affect the main story but instead impact that particular character’s arc and the amount learned about their personal mystery.

Honestly, I cannot wait for the inevitable anime adaptation that will arise from this novel. Like Steins;Gate before it, there is no doubt that it will be the highlight of whatever season it is released in. As a visual novel, I cannot but help believe that more could have been done with the medium. Too often a nail-biting action sequence would be described rather than shown, taking away a lot of potential action and intrigue.

Psycho-Pass: Mandatory Happiness somehow manages to be an easy and hard recommendation at the same time. The story, characters and theme that worked so well in the first season of the anime return and are in top form. The antagonist might very well be the best in the entire franchise. Any fan of the series will find a lot to love here. Unfortunately, as a video game, or as a visual novel, it fails to really impress. If you’re unfamiliar with the anime, I doubt there’s much here worth investing in.

Psycho-Pass: Mandatory Happiness is available on PS4 and PS Vita. We reviewed the PS4 version.