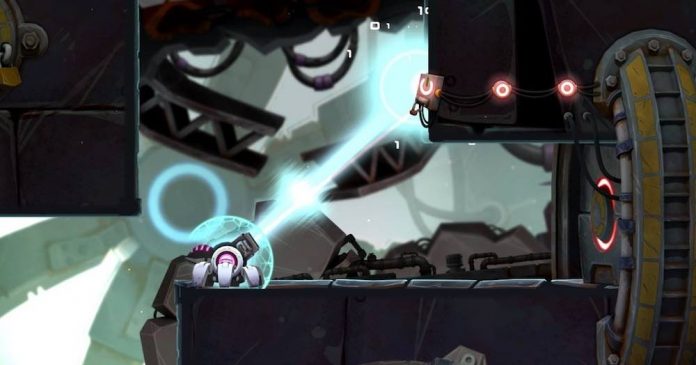 Rive is easily the hardest game I have had the pleasure to fail miserably at this year. But here’s the thing, being bone-crushingly difficult is not really a positive or negative characteristic. It just is. The question that remains is whether Rive manages to keep making me come back for more.

Compared to the EAs and Ubisofts of the gaming world, the general public is probably not aware who TwoTribes are. Founded in 2001 by Martijn Reuvers and Collin van Ginkel, the independent Dutch company has spent the last 15 years perfecting the art of fun, colorful and easily digestible platformers. Their impressive backlog includes original titles, franchise releases (like Ice Age and Garfield) and Toki Tori (2001), which debuted on the Game Boy Color all those years ago before being ported to nearly every gaming device up to the Wii U.

Sadly, Rive is the company’s swan song. A tour-de-force that promises to combine all that Reuvers and Ginkel have learned over the year into one memorable climax. Does it succeed? In most ways, yes. Is Rive a fitting endpoint? Definitely. Did I have a blast playing it? Kind of.

Rive is a 360 degree twin-stick shooter/platformer hybrid that sees players take controls of “Roughshot”, a space cowboy on the hunt for some good old metal. Alas, his life is flipped turned upside down when he finds himself trapped in a mysterious spaceship. Fortunately, he is inside his somewhat safe spider tank that is filled with all kinds of fireworks to combat the mechanical beasts found inside this floating hellhole. 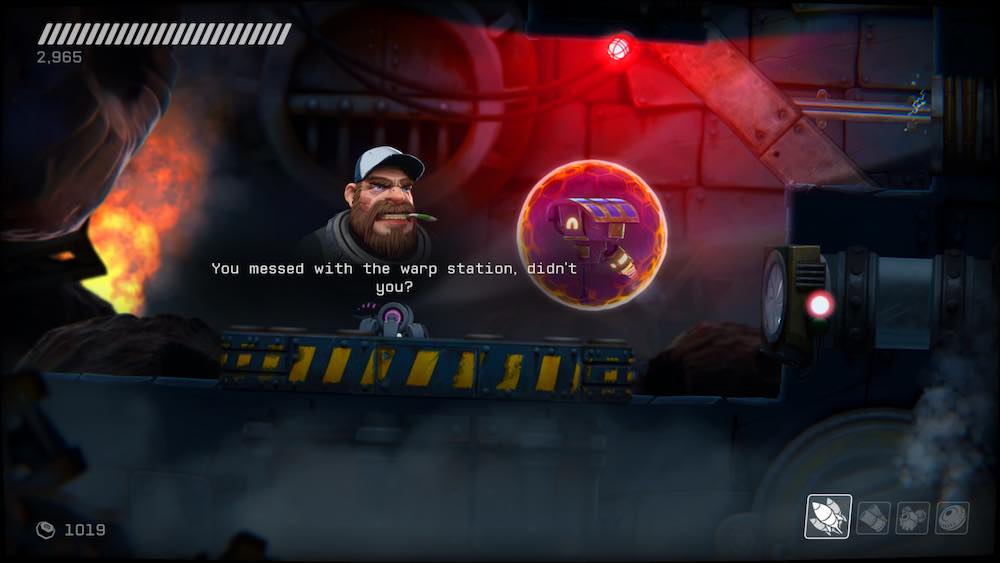 Roughshot is a likeable lead to say the least, especially for fans of self-referential humour. Although Two Tribes opt to never completely break the fourth wall, the snarky protagonist makes a few comments regarding the gaming industry in general. A few, including one mocking “pay to win” titles, are delivered with quite a bit of bite.

You control the spidertank, which does not offer anything new in the way of controls. Move left or right, with a double jump button (L2), right stick for shooting and a special attack (R2). Rive is responsive enough that nothing feels like a particular chore. I always felt that I could calculate instantly how far a jump will go and the twin stick shooting does not leave anything to desire. Again, nothing particularly exciting but everything hits the mark.

There are four special attacks that can be unlocked overall, with each then being assigned to a direction arrow. Thankfully, all four variations provide a completely unique means of attack: The homing rockets favor ambushes, the shotgun blast is best for face to face combat, the bouncing mines to cover your tracks and the electric shock for just pure awesomeness. Each ability is fun to use and worth testing out.

Unfortunately, only one ammo can be held at any given moment for each attack. This would not be that much of a problem, especially since all four are available pretty quickly, but the quick-fire nature of the game does not allow any time to switch attack mid-battle. Often I found myself having to die a handful of times to have any chance of developing some form of strategy.

There is also a hacking system in place. Pressing L1 or R1, a sensor is shot out that can open doors, convert enemy bots to attack their own team or nurse bots to heal the spidertank. Having no depth whatsoever, this potentially interesting element to Rive ends up feeling tacked on rather than a genuine organic part of the experience. Although a useful concept, it is very rare that hacking can actually be used without leaving the player exposed to a huge counter attack.

Visually, Rive is impressively kinetic. Although we’ve seen dozens of metallic wastelands in games, especially 2D platformers, before, Two Tribes effective use of background splendor helps add a “WOW” factor that is not easily achieved. The soundtrack is also quite strong. 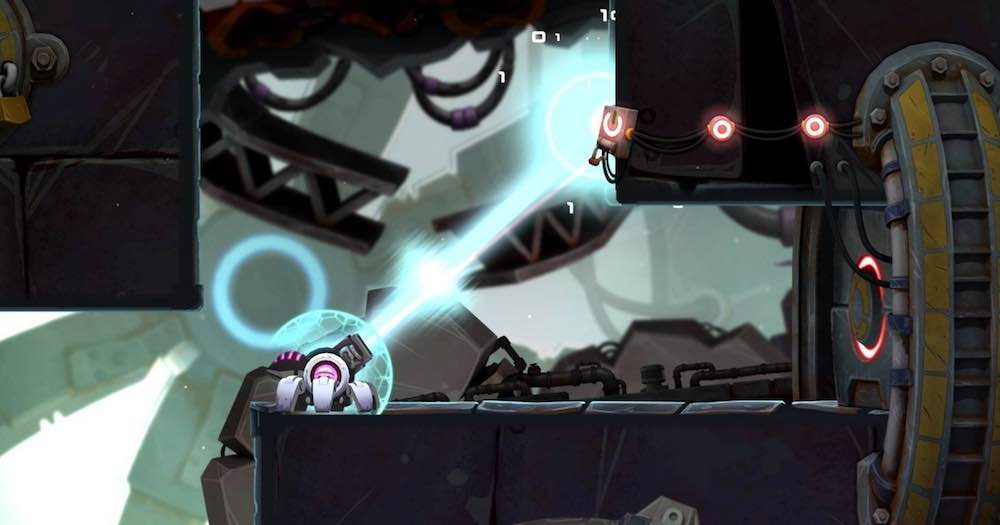 And there is never a moment when Roughshot is not being bombarded by laser beams and space trash. It is literally one onslaught after another. Edge of your seat entertainment in bursts, but really exhausting after awhile. In about two hours, I saw the death screen more times than through all of Dark Souls III. And, unfortunately, I found myself getting annoyed rather than enthralled with each passing death. Even with the very generous checkpoints, Rive failed to give me that sense of satisfaction after finally passing a difficult segment. Especially since most situations felt more like trial and error than actual skill.

But please take into account that I was far from great at this game.

Still, Rive does not hide what it is meant to be. This is no games for beginners or time killers. This is not one with the mobile audience in mind. With only “Hard Mode” available at the start, this is Two Tribe’s final hoorah. And they plan to take as many of us out with them as they can.

Rive is available on PC and PS4. We reviewed the PS4 version.