For as unsettling as the end of the universe can be, ThirtyThree’s new action platformer RunGunJumpGun is able to find tons of fun in the perilous final moments of a dying solar system.

Evoking familiar moments of other difficult indie games, this painfully appetising explosion of colour and sound will have you coming back for more even after your hundredth time dying on the same damned stage.

RunGunJumpGun’s odd name may not make much sense from the outset but once you dip your toe into this LSD trip in space you’ll begin to understand what it’s all about. Its premise has you running and shooting your way through dying worlds at the edge of the universe. By constricting your control to two buttons – one that shoots in front of you and one that shoots below you creating enough lift to propel you through the air – it forces you to keep moving at the game’s breakneck speed. It turns the fairly easy-going nature of Flappy Bird’s design, one in which you must gauge your lift appropriately to dodge obstacles and hazards, into a gauntlet of patience and frustration. All of that may sound like an exercise in some sort of twisted masochistic behaviour but it instead somehow turns that bang-your-head-against-a-wall feeling into something fun and rewarding. Stages are assorted similar to a Mario game with three worlds that are divided into acts and each act divided further into individual levels. Stopping short of calling it the Dark Souls of action platformers, that comparison is still somewhat appropriate (albeit clichéd and lazy) as it teaches you valuable lessons with each and every failure.

Any other game might assume the obvious choice for handling failure is to penalize the player for it. RunGunJumpGun takes a slightly different approach. Mercifully respawning you at the beginning of each stage the game gets you back into the action as quickly as possible. Without any time to rest after dying, there’s a constant feeling of progression even if you’re stuck playing the same level over and over again. The game uses this simple idea to turn replaying stages from a chore to a reevaluation that’s incentivised in the your past mistakes without ever losing the fun. The design of the game mirrors its approach to death as multiple moments require countless replaying before a solution is ever understood, and then even more before you could ever even pull it off. However, it’s that same idea of getting back into the action that lends the game it’s addicting nature. As you play portions of the game repeatedly it constantly keeps the action moving, making it hard to ever put the game down. This all comes together to expertly dodge what could have been an incredibly frustrating and shallow experience.

With death so prevalent in the game’s design, it only makes sense that its story circles around a giant dying solar system. Taking place on three planets, each run by a different tyrannical warlord, their sun is dying as it begins to burn up every planet in its wake. Allegorical tones of climate change can be found here as the game portrays a universe on the brink of disaster, but it’s never in your face about it. Instead, it takes a backseat to the action only reminding you it exists in small moments between levels via short sentences that connect across different acts. The game’s vibrant colour-scheme and trippy pixel asthetic pairs well with its equally colourful cast of characters, reminiscent of some sort of Mad Max in space. Bouncing between space tv hosts to shifty bandits, there’s an interesting stylised vision here that feels genuinely unique. 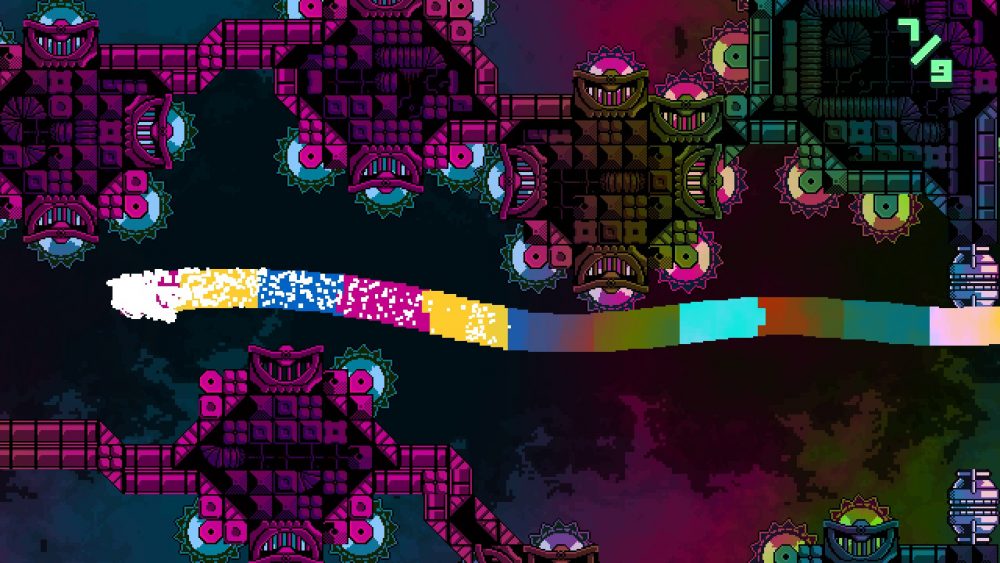 It’s not just running and gunning (and jumping) that gets you through RunGunJumpGun’s insane universe of 120+ stages, however. The game also tasks you with collecting floating green orbs called atomiks that dot each level. While smartly they aren’t required to progress through the game’s already nigh-impossible climb, it does add some interesting incentive for replaying past stages allowing any die-hard players an option after completing the game’s few hours of content. However, their placement can even occasionally help you understand the more challenging levels as they can direct you through some of the more difficult to understand stages like a connect-the-dots puzzle.

A heavy amount of variety lines the entire game’s runtime as well as more and more mechanics and obstacles are introduced. While early on you may only be dealing with fireballs of death and spiked walls, slowly you’ll be managing warping from different parts of the screen and even reversing gravities. There’s a lot to learn in RunGunJumpGun but thankfully everything is explained properly giving time to understand its new mechanics before diving back into the normal hellscape of the game.

It’s things like this that help define the brilliance of RunGunJumpGun’s design. Often there will be moments where it feels as though you completed a level on luck alone when in reality, the design of the stage is simply smarter than you are tricking your muscle memory to push you from point to point. While plenty of levels will look like a Super Mario Maker level from hell, they more often than not are so intuitively designed that you may understand its complexity before you even realise it. The same speed that lends it its addictive quality also makes the game fly by you, making it easy to lose track of time as you zone in and lose yourself in the game. That’s not to say there are never moments of genuine frustration, mind you, as it floods the screen with obstacles for you to overcome without giving you a chance to get a real look at what you’re running into. However, these moments are few and far between amidst what is mostly a surprisingly consistent game.

Self-described as a combination of VVVVVV, Hotline Miami, and Super Meat Boy, RunGunJumpGun takes the best parts of recent indie game memory and smashes them together smartly. By understanding what makes each of these games brilliant is also why RunGunJumpGun succeeds at balancing its preposterous difficulty with its nonstop fun. Thanks to its speed and minimalistic controls as well as intuitive design, this is game that can outsmart you in the best of ways. While occasionally becoming a bit too overbearing sometimes resembling more of a bullet hell than an action platformer, this is a game that understands and implements its ideas perfectly. You’d be hard pressed to find a more impressive indie title this year. Furthermore, it’s a game deserving of the same accolades as its inspirations. A surprise hit that is sure to both challenge and reward you.

RunGunJumpGun is available on PC.