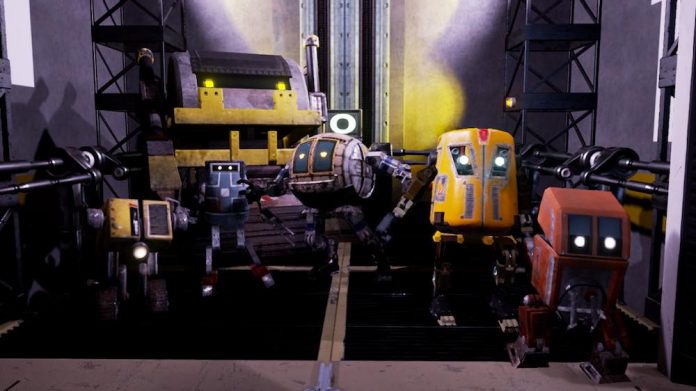 A video game can be bad for a lot of reasons.

It may have clunky controls, poor animations or bad graphical quality. Sometimes it may just have bad optimisation with numerous technical issues or bad UI. Unfortunately, Shiny is all of these things. From a general perspective it could have quite good – a Shiny diamond in the rough if you will – but poor design choices plague this particular title and stop it being the game it could have been.

Shiny takes place on an abandoned planet, Aurora, which is hurtling towards the sun. You play as one of many abandoned robots who must venture across the planet in search of battery cores and other robot chums to build a spaceship, with the aim of escaping this particular deathtrap. It’s an interesting concept, especially for a platformer, and unfortunately the first of many examples where developers Garage 227 attempt to reach for the stars and trip up at the first hurdle.

A surprisingly good soundtrack sets the tone very well during the introductory cutscene. The problem is just about everything else. Now, I’m not someone who believes a game needs good graphics; sure, high visual fidelity or a stunning artistic style can add immensely to a game but as long as you have something that works it’s the gameplay that really matters (especially so in a platformer). Shiny does not have something that works. Textures look incredibly stretched and muddy even on the very highest setting (which is the only playable setting but we’ll get on to that later), animations are clunky and stiff and the poor implementation of a 2.5D perspective means it is often difficult to tell what on the foreground you can actually jump on and what you can’t. 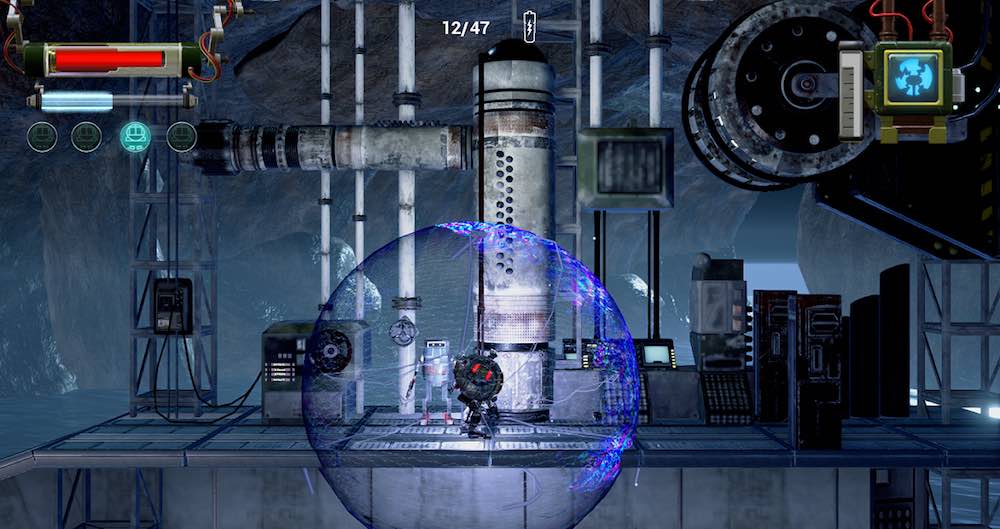 Worst of all is the plentiful technical issues and bugs. Remember how I was saying you can only play on the highest setting? For some unknown reason if you select anything below “epic” quality it drastically affects the brightness of the game. To the point that if you try and play on “low” you cannot actually see what you are doing – making the clunky platforming even more difficult to deal with. Even worse is the screen tearing –  which is continuous by the way. Usually screen tearing in games occurs rarely when frames are input in the wrong order – often most noticeable in FPS games due to the all the looking around. The fact that a sidescroller has it happening continuously as you move may make Shiny unplayable for some.

But if you can make your way past all of that, how is the gameplay? Shiny plays exactly how you imagine a platformer would. There is very little here that is not moving, jumping or holding F. There isn’t any wall-jumping, double jumps or any other fancy manoeuvres, just pure precision platforming. Unfortunately it is heavily hampered by two main problems. The first is something quite common in many sidescrollers; being unable to see what is ahead of you. Commonly used to make players quickly think on their feet, here it serves as more of an annoyance.

The second is something quite common to Shiny itself; clunkiness. While you may be controlling a robot, and yes, robots are heavy, sometimes artistic liberties must be taken if it gets in the way of fun gameplay. Kramer 227 feels sluggish, bulky and innacurate – on both controller and keyboard. With gameplay that relies so heavily on precision jumping it is hindered completely by unresponsive and unwieldy controls.

Even Shiny‘s most unique feature is often an inconvenience. Collecting batteries both serves as an overall goal towards completing the spaceship as well as a quick fill-up of your energy meter. Your meter serves as your health bar as well as… well, energy to do just about everything else with. From rescuing robots to activating checkpoints to using your very rarely used shield or using your temperature cooler you need energy for everything. But you can’t carry too much and running out means you die. 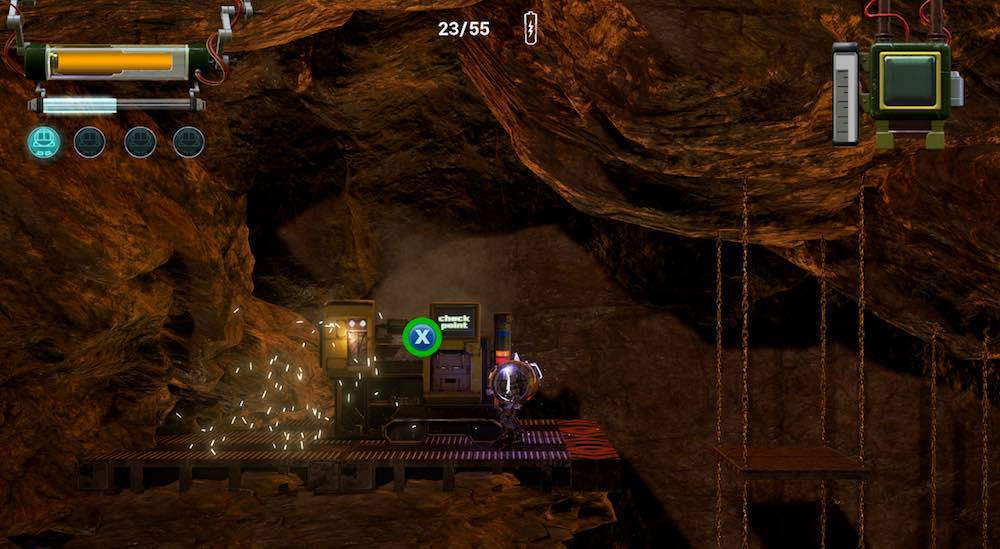 Everytime Kramer 227 inevitably falls to his death or runs out of juice he is placed back at a checkpoint fully recharged. The problem is that checkpoints can only used a certain number of times before you are placed even further back – and certain things take way too much charge to even use. Oftentimes it is more preferable to just run through a barrage of falling rocks than use your shield because of the energy drain. An area with fire must be rushed through due to how much energy Kramer’s cooler needs (which you must annoyingly mash shift to use).

Shiny isn’t completely terrible; the story is told respectably enough and the light piano-led soundtrack is a joy to the ears. Barring, of course, the one timed level where you bolt to the end accompanied by a terrible techno song at almost double the volume. The best bit? The audio sliders don’t work on that level so prepare your earmuffs. That sums up Shiny rather well; for everything decent here, there is something bad working against it and then on top of that, there are numerous technical problems affecting it even more.

Shiny is available on PC.