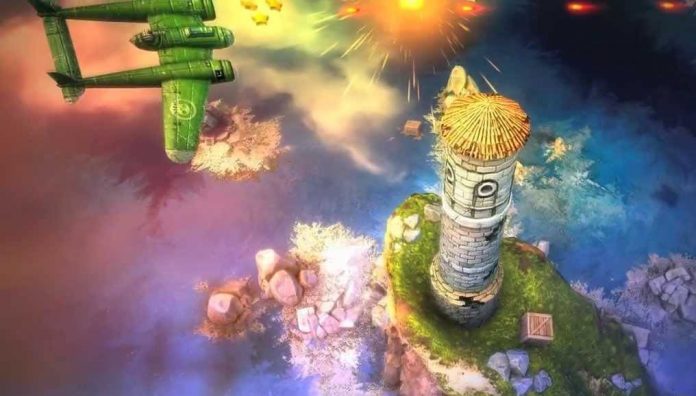 Sky Force Anniversary is a port of the third game in the Sky Force series, originally released on iOS in 2014. This version is based off of an enhanced release originally made for the PC in 2015 and this will make the series’ overall debut on consoles.

The game is essentially an old-school vertical shoot’em up in the vein of Capcom’s 1943 – a.k.a. plane-on-plane action. There’s not really a narrative to speak of; only a tenuous background in that you’re a good guy fighting back against an evil commander. That’s it, but that’s fine because these games are never strong on narratives anyway – it’s actually refreshing to play a true arcade type of experience.

Your ship begins with a standard main cannon that’s frankly pretty slow. In battle, enemies will drop health to recharge shields, stars as a type of currency, and weapon upgrades. Normally in shmups weapon upgrades will improve your vehicle, but here they have a minimal impact on your speed and power. In lieu of this, the key to empowering your arsenal is with the aforementioned stars. There are those that improve the overall quality of the ship on a permanent basis and the others are basically special abilities, but let’s get to the basics first.

Armour and the main weapon can be upgraded right away to increase their effectiveness, but you can also add new items to your arsenal. The wing cannons add two more beams of weaponry to your attacks, the missiles fire once every few seconds, and then there is the magnet that attracts stars to your location after defeating enemies. They cost a bit to unlock at first, but like the armour and main weapons, they become more accessible afterwards. Of course, the more you upgrade the higher it costs as you progress forward. 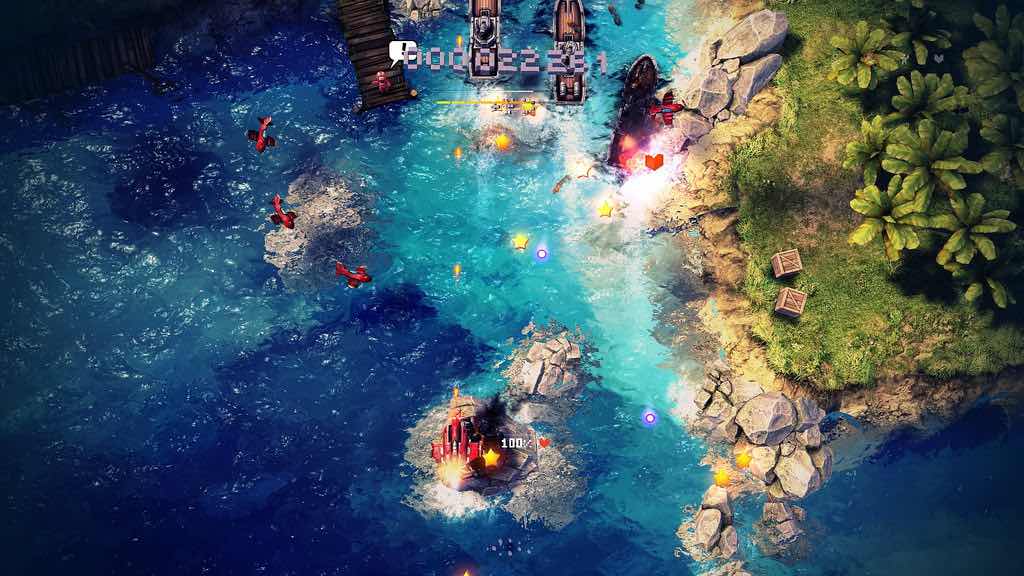 The specials include a Energy Shield, which blocks attacks, the Laser, which shoots out a powerful wave of energy, and the all powerful Mega Bomb that destroys everything on screen. These weapons take the most to unlock and even after you do, they don’t technically become available right off the bat. For example, it takes 1500 stars to gain access to the Mega Bomb, then in order to use it on a missions it costs 500 for one bomb, 1000 for another, and so on. They do drop during levels as well, but they’re extremely rare in my experience. It’s a rip off and it’s definitely a worthier goal to increase all other aspects of your ship first before even attempting these specials.

Actually, in general it takes a lot of time to beef up your ship in Sky Force Anniversary. Like a RPG, it’s a grind and it essentially pads the somewhat short experience. There are nine levels overall, and in order to move on you have to beat each mission and earn enough medals to pass. These medals range from rescuing civilians to taking out a percentage of enemy ships. It kind of pushes mastery on players, which is a bit demeaning as not all fans of shmups, like me, are savants. Granted, with practice I got good enough to crack enough medals to beat Sky Force Anniversary, but for such a seemingly short game, these stretches of grinding back and forth lost its lustre fairly fast for me. Thankfully it supports Remote Play on PS4 so I was able to snag stars quicker by catching some TV while I played on the handheld. I’m all about multiple tasking especially when it comes to tedious tasks like this.

Visually, Sky Force Anniversary looks nice with a colourful pallet and a magnificent set of effects, but there’s not enough variety in the levels. You basically go from ocean, to land, to some land with trees, maybe a base, and then back to the ocean again. It all feels like the same level, but with remixed assets. On those same terms, the music, while good, is very repetitive; at best, there are only a handful of songs to listen to. Again, it’s short, but there’s a lot to do for those wanting to test their merits on high scores and complete mastery. Unfortunately, most of the game’s content kind of forces you to do that anyway. Thankfully there is couch co-op, which makes the entire task somewhat more enjoyable.

Sky Force Anniversary is a great modern shmup that unfortunately pads its content by pushing players to the max. Not only that, but there are implementations, such as the specialties, that feel arbitrary. Detractions aside, I liked the game quite a bit and the addition of co-op and Remote Play was a godsend. Sky Force Anniversary didn’t evolve the genre, but it created something moderately pleasant in our modern architecture.

Sky Force Anniversary is available on PC, PS4 and PS Vita. We reviewed the PS4 version.