I’ve played quite a few bullet-hell shmups over the years, and whilst many have come and gone, none have quite captured the feeling I used to get from playing them on the early 3D consoles such as the PS1 and Sega Saturn.

I wouldn’t go so far as to say that I love the genre, because they inherently ask that the player be insanely skilled, and able to pull off pixel perfect manoeuvres, dodging and weaving between the smallest of gaps left by enemy bullet patterns (which I can’t do very well!). Nothing really profound besides Sine Mora has been released in recent years that is challenging enough so that it isn’t boring and plays itself, but isn’t so difficult you feel you have to be a gaming god to finish. Stardust Galaxy Warriors has come along and changed that.

Stardust Galaxy Warriors: Stellar Climax doesn’t take itself seriously at all, and everything is very tongue in cheek. You play as one of five unique Mechs that can be outfitted with a primary weapon and secondary weapon of your choosing. Mixing these loadouts is one of the many things that makes the game incredibly replayable. I enjoyed going back and forth between pre-completed missions (as well as a new game+), creating my own unique weapon loadouts from a shotgun that blasts a cluster of lasers at once, mixed with a grenade launcher that slows down the grenade as it travels further, meaning that I was a master of close quarters combat. There’s endless fun to be had in trying different combinations of weapons to find the right weapon for each stage.

Each Mech also has a melee attack that puts them into a Samurai-like barrage of sweeps, taking out everything around them in an arc. There’s also their secondary attack which could range from something like reflecting projectiles to absorbing them into a concentrated energy ball to fire back at the enemy (but you stun yourself if you absorb too many!), and goes as crazy as a flash teleport to dodge a fixed distance around the screen. Finally there’s an ultimate attack, which allows you to set off a massive screen filling bomb, slow down time, become invincible, or unleash a large cluster of homing missiles. Each Mech having their own unique skillset, alongside the mixing of primary and secondary weapon loadouts, means you’ll never be satisfied playing one style of Mech, and will constantly find yourself experimenting and trying something new in the next round.

Each level of Stardust Galaxy Warriors consists of three rounds. You face off against a few elite type ships at the end of a round before reaching the final boss. Levels are punctuated by cutscenes, which are often hilarious, and keep things light-hearted and entertaining. Quirky moments and well-scripted set pieces of dialogue keep the game fun inbetween missions. The whole game has that Anime sort of appeal to it; it remains silly and very aware of itself to provide some great comedic relief, which is refreshing to see in a shoot ’em up.

There’s a large collection of powerups available for pick up during missions which include perks like refilling your armour or increasing the power of your projectiles. At the end of each stage, you’re also given the opportunity to buy different attachments for your mech, giving you various skills and improvements. The amount of variety on offer is ridiculous! You can also buy stat upgrades for your Mech, which raise their damage, resistance to damage, or shield recharge rate etc. These are also given away freely at the end of each round in a level, so even if you don’t buy anything at the shop you’re still always growing as a player with light RPG elements thrown into the mix, which is nice to see featured in the genre. This progression really comes in handy in new game+ when bosses change their patterns slightly, and things become more difficult. 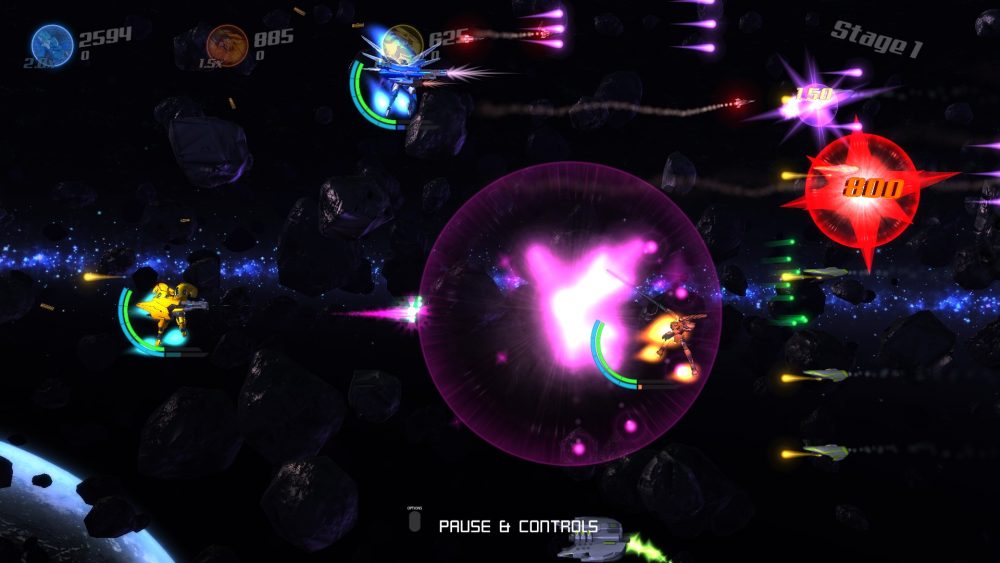 Stardust Galaxy Warriors balances a thin line between being a casual and approachable shmup, and intense bullet-hell action. Whichever your preference (or skill level), you can pick from a large set of preset difficulty levels, or you can create your own custom difficulties instead. From options such as how much health enemies have, to how often they drop items, the list goes on with settings you can tweak. So if you want a super-easy, fun game that lets you feel amazing taking down waves of enemies, you can do that. If you want to be pushed to the limit, where even one bullet landing on you spells disaster, then you can turn everything up to 11 and master each stage like one massive choreographed dance. Every enemy type is distinctive and instantly recognisable, meaning you know exactly what to do when one of them flies onto the screen.

Stardust Galaxy Warriors presents itself in a neat and organised fashion, so that it doesn’t overwhelm the player as they go about their business. No matter what difficulty you opt for, the game always feels lenient, and makes sure that any mistakes made are your own. Bullet patterns are predictable, and enemy ships behave in the same manner (for the most part); it’s up to you to learn the dance, and as long as you keep your cool, everything should be fine. Once you work out a particular routine, it becomes more of a puzzle in figuring out what to do next based on the situation developing on-screen. This predictability doesn’t make it any easier, just more manageable. At the end of the day, everything still relies on your skill and reflexes to maintain consistency in your movements and actions.

Then there’s the soundtrack. Easily one of the best I’ve heard in this genre, and a fantastic game soundtrack in general. Alongside a strong visual design, the music and audio design keeps things pulsing forward and keeps you informed of what’s going on around you; the sound effects are great signals for what’s happening and letting you know when you’ve successfully performed actions or not. The excellent quality of the soundtrack simply cannot be understated. It’s purchasable alongside Stardust Galaxy Warriors in a bundle, and I highly recommend you do so, as you’ll find yourself addicted to its 90’s-inspired techno rhythms.

If you think everything on offer so far sounds fun and exciting, you’d be right. But there’s one thing I haven’t yet mentioned: 4-player co-op. Yes, plug four controllers in, and you can play with your friends on a higher difficulty setting, and live the madness alongside them. It’s an exciting thrill to be able to ramp up the difficulty, knowing you can rely somewhat on your teammates who are now joining you for the ride. You also have the ability to revive them, so this makes harder playthroughs easier if you have people to help you. Obviously because twitch reflexes and quick-millisecond decisions are so vital here, the multiplayer component is restricted to being local-only, and not online. 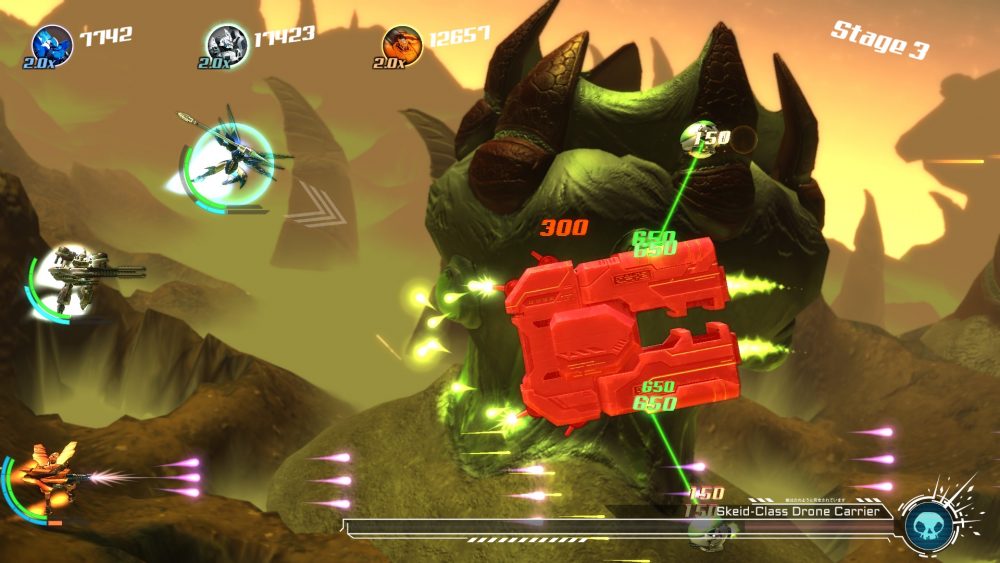 If I didn’t have such a devout love for G-Darius on the PS1 with its enemy-capturing ball mechanic, then Stardust Galaxy Warriors would easily be my favourite game in the genre. The only complaint I could possibly muster to mind in such a great game, is that maybe the backgrounds in the level repeat in quite an obvious fashion, but in this genre, the background is no more than fluff to wrap around what the important aspects of the game: the bullets and the enemies on-screen. Even that minor quip could be dismissed as good design in order to keep distractions at a minimum, and player focus on where it should be.

For £7, you have one of the finest examples of not just a shoot’em up, but of any small-scale arcade-style experience game out there. I’m still dumbstruck by how fun Stardust Galaxy Warriors is, its quirky humour and the overwhelmingly impressive array of options and customisations on offer. Add in the ability to play with friends, and the replay value of the game is through the roof. Even after finishing the game twice and basically maxing out my stats, I’m still going back for more, even if just to beat one level on the challenge mode for a few minutes. There’s something about the way the Mechs move, the guns fire, the particle effects, and the clarity of the graphical elements on screen both visually and in their design, that just sits right with me. Any mistakes made are completely your own, and you don’t feel cheated by the game at any point, everything is made clear to you, which is incredibly important in a bullet hell game.

Even if you don’t consider yourself a fan of the genre, I beg you to give the game a try, and I think you’ll be pleasantly surprised. I’ve finished the multiple times, and can’t help but grab the nearest person available to me to come join in with me. Their reaction is the same as mine, and even people I consider non-gamers end up finding a level they can play at alongside me. Everyone from your uncle to grandfather has probably played Space Invaders at some point, so even they understand what’s going on if the difficulty options are turned down low enough. It can be your next LEGO Star Wars to play with family and friends who aren’t too versed in video games, and it can be your personal little Ikaruga if you want to test your skills. My point is, it’s a great game, and deserves everyone’s time. I’m slightly regretting shelling out £30 for DARIUSBURST Chronicle Saviours on release, when a game I’m clearly having a much better time with and have already overtaken hours wise cost a fraction of that amount.

Stardust Galaxy Warriors: Stellar Climax is available on Xbox One and PC. We reviewed the PC version.