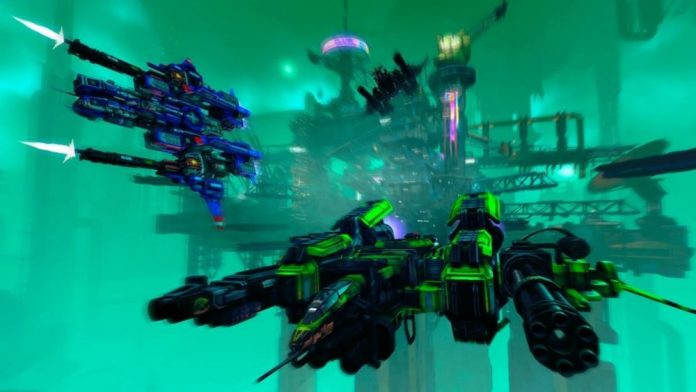 Pilot your Vector around floating cities, mining facilities, and enemy strongholds all at high speeds. The game moves fast and the action is palpable, which lends to a memorable experience with each mission. It harks back to the time of classic flying-based shooters, and feeds off those inspirations well.

One of my fondest gaming memories belongs to Star Fox 64, a game I poured hours into as a kid. As time went on games came and went, but never succeeded in capturing that same energy. Strike Vector EX, on a personal level, finds that spot in my nostalgia on several occasions. For fans of games like Star Fox or even Ace Combat, the high-octane battles that take place feel right at home, especially in multiplayer. There’s plenty of variety in Vector loadouts, cosmetics, and playability. With snappy flying mechanics, well-designed multiplayer, and good action, Strike Vector EX is a standout on the PSN store.

The single-player experience within the game isn’t lacking, but it doesn’t have much depth either. The protagonist, Marv (a.k.a. you), is a Vector pilot during a time of rebellion and political unrest. There’s a number of groups that fight amongst  each other, such as The Wreckheadz, The Syndicate, and The Consortium. The Consortium’s role is mostly governmental, functioning as the most organised group with a President and a structured hierarchy. Other groups are pirates and rebels. You spend most of the missions bouncing between allegiances that it becomes difficult to tell whether Marv knows what he’s doing by the end credits. The story isn’t too deep, and the voice acting is decent, but there are some standout lines and moments, along with a few twists, some more telegraphed than others. You’ll have leaders, co-pilots and trusty sidekicks; some are memorable, others not so much.

Each level gives the player a good amount of freedom to roam and encounter enemies in different fashions. Most of them are open air space, but a few of them take place in tight spaces which makes for some intense moments. There are pick-ups around each level, either to reduce your ability cooldown or to repair (heal) your ship. Although level variety is fairly good, the objectives of each mission are rather stale. You shoot down enemy pilots, destroy an object, then you repeat. The more interesting moments come during “Last Stand” sequences. In this universe, two pilots face off in a Last Stand to the death when they feel they’re equal, bestowing proper honour of the loser. This mechanic was neat, and led to some of the best fights in the campaign, as these opponents are usually tougher and smarter. 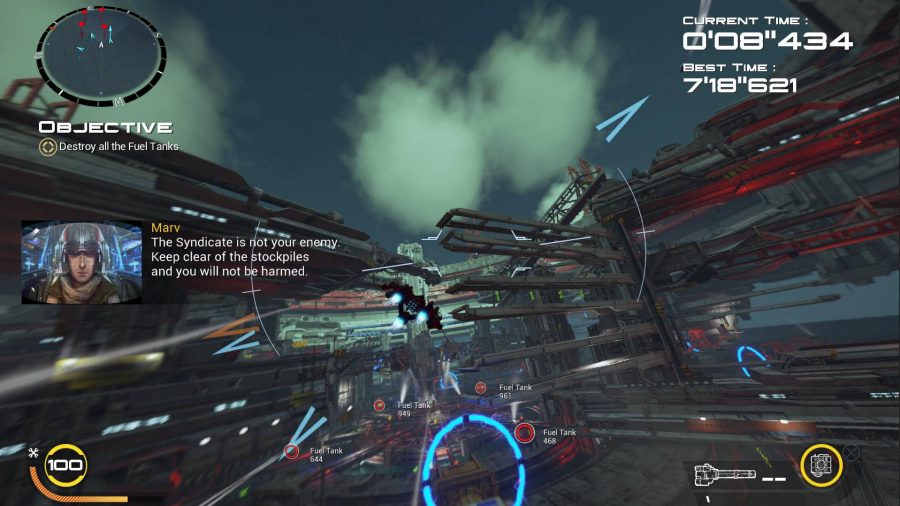 Along with the campaign, there is also a Skirmish mode for solo players. After completing each level, 15 in all, a Skirmish level will unlock based on that map. Here, you face off against bots while defending a given location. It’s a nice place to practice your skills with the Vector. Perfecting Vector movement takes a bit of time, given their wide-range of abilities. You can boost into a faster flight mode, or let off the boost and have more control and better lateral movement. While coasting you can also zoom in with your weapon, allowing for an FPS approach to combat for long range battles. You can also evade missiles and roll your ship, for quick evasions (in both flying modes). The Vector movement capabilities are so well-tuned that you can never blame the game for a miscalculation. The only other key to survival, is your loadout.

Before entering any battle, you must first equip your Vector for combat. There is a great amount of variety in this department. Three fields exist: weapon, active ability, and passive ability. Weapons function on two levels, precision and damage. High precision weapons take more skill, but generally output more damage. Low precision weapons have a larger hitbox, but generally output a little less damage. You have shotguns, plasma guns and swarm rockets, to name a few. Each one can also have a perk attached to it, like faster fire rate or higher damage. It’s a personal choice, and when you find the right weapon for you, you’ll know it. The same goes for active abilities: you have shields, mines, healing fields, etc. These don’t necessarily benefit or suffer from certain weapon pairings, but mines, let’s say, can aid you at close range if you’re using a precision range weapon.

Passive abilities I found to be most helpful all-in-all within mutliplayer. You can pick between things like higher defence, a passive speed boost, or enemy visibility through walls. Picking the right passive ability can really give you a leg up against other human players. Along with that, you can add your personal touch to you Vector through customisation. Decals, different styles for parts of your ship, and a bevy of colour choices allow for good variability in ships. You can earn credits, or Kebs, by playing multiplayer. And on the subject of multiplayer, as Ragequit Corporation Co-owner Paul Chadeisson said, “This is the heart of our game.”

Multiplayer is where Strike Vector EX really comes to life. With bot support, whether the lobby is full or not, you’ll always have a game to play. There is a large variety of maps to play on, as well as some great game modes: standard deathmatch, capture the flag, capture-and-defend. All of these are dialled up with the intense, high-speed combat of the game. Zooming around floating structures, in and out of mining facilities; all of this is more striking while being hunted by another player. The game never fails to look impressive either; whether you’re just slowly moving or blazing around, it always looks sharp. Also, during multiplayer matches (and campaign) be wary of friendlies! Friendly fire is a real thing which you cannot remove. With a huge offering of maps and modes, multiplayer is an absolute blast. 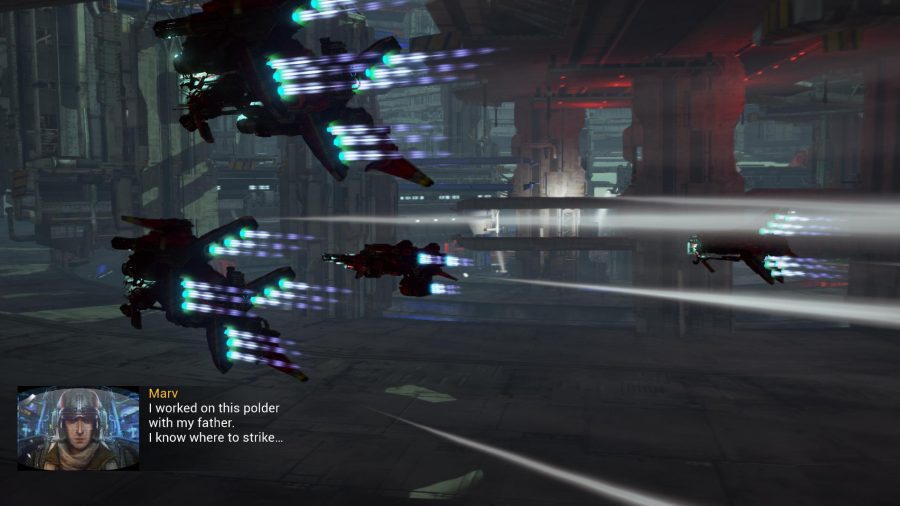 Strike Vector EX pulled on a lot of nostalgic heartstrings for me, and it was a refreshing experience. The gameplay is amazingly tight and controllable, and the combat is hectic and fun. The heavy rock soundtrack fits the atmosphere of the game perfectly. This remaster of the old Strike Vector has given players a bigger, grander world to explore. The campaign is short and lacking, but the multiplayer is worth the price of admission alone. If you’re a fan of dogfights, this is a game you shouldn’t pass up. When it’s rolling on all cylinders, it shines. Strike Vector EX can elicit some serious enjoyment. Don’t miss this one.

Strike Vector EX is available on PC and PS4. We reviewed the PS4 version.