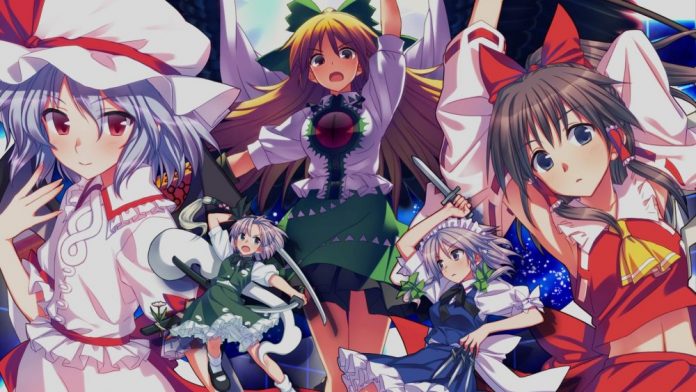 I’ll be honest: when I first chose to review Touhou Genso Rondo: Bullet Ballet, I was excited but had absolutely no idea what I got myself into.

I knew that I really appreciate NIS America and many of the games they publish, and that this game’s title sure is a mouthful. I decided to do a little research to acquaint myself with the game and the source material. The moment that I identified the game as a bullet hell shoot ‘em up combined with a fighting game, I realised that I still had no idea what I got myself into. Rest assured, after turning on the game and playing it extensively, I now know what I got myself into. NIS America and developer Cubetype bring Touhou Genso Rondo: Bullet Ballet, a remastered version of the Japan-only title Genso Rondo, to North America and Europe. And it’s a really good thing.

For those who don’t know, Touhou Genso Rondo combines characters and bullet hell elements from the Touhou Project series with aspects of a 1-on-1 arena fighting game. In the end, you have a shoot ‘em up with the win conditions of a fighting game. This remastered version for PlayStation 4 features HD graphics, improvements to UI, additions to the single-player story mode, new characters and modes, online play, and other minor changes.

In typical bullet hell games, the player shoots from the bottom of the screen at approaching enemies from the top of the screen. In Bullet Ballet, however, those approaching enemies are replaced by another player (or AI), and players freely move around a flat, open battlefield. Characters have a fixed lock-on to one another, relieving players of the need to aim when firing. In simplest terms, players move around the battlefield and fire an outrageous amount of bullets at one another with the goal of reducing each other’s health to zero. Players move using the left stick and have the ability to slow down movement or dash using L1 or R1 respectively.

In terms of attacks, each character has a main attack and sub attack. Using the attack enough will deplete your gauge for each attack, resulting in a brief inactivity period while they recharge. Combining L1 or R1 with the use of one of those attacks will cause your attack to change in form, adding a great deal of versatility to your attack combinations. Each player also has a charge meter, enabling the use of charge attacks. Players fill their charge meters by narrowly dodging bullets (referred to as “grazing”), meaning that dashing away from your enemy’s barrage may not always be your best option. Spell cards, extremely powerful and over-the-top attacks, are also possible with your charge gauge, making precision dodges all the more gratifying. 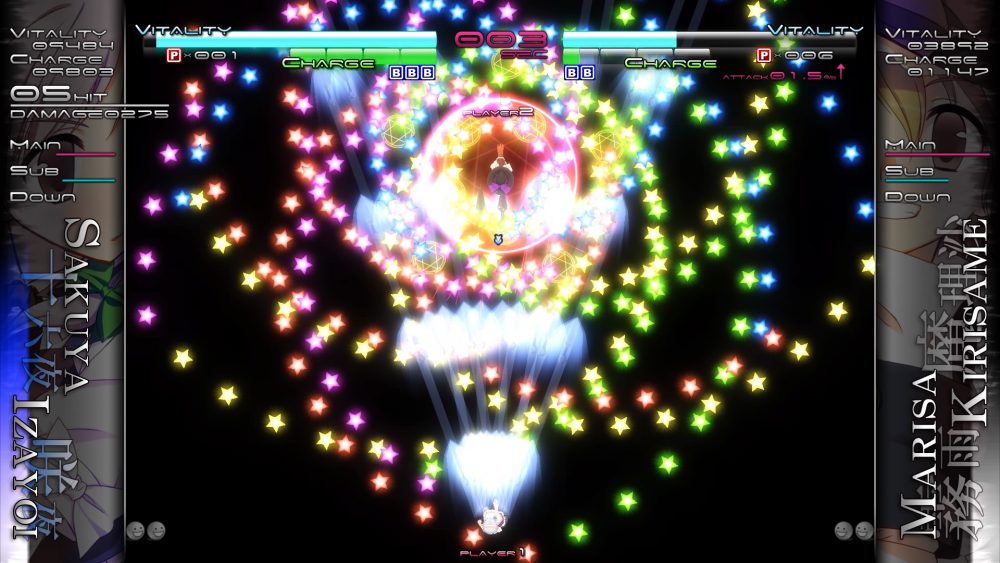 While all 10 characters utilise the same control scheme, their attacks are very much unique. Sakuya Izayoi, focuses on throwing knives as projectiles, so a lot of her attacks revolve around straight shooting or homing knives. Reimu Hakurei, a shrine maiden, has the majority of her attacks designed around throwing talismans and seals. When the rest of the roster includes a vampire, a ghost, a half-phantom, and whatever a “Crow Tengu” is, you’ll undoubtedly find a lot of variety. Once the game’s mechanics are grasped, each character feels accessible while still retaining their individual charm and personality.

Normally, I would recommend new players to first start with the tutorial in most games. That isn’t the case here; overstuffed with dialogue and quick to throw all of the mechanics at you at once, it feels more likely to overwhelm you than to coach you along. In many cases, after explaining an attack, the dialogue suggests that you will get a chance to practice the mechanic. Instead, it shows an animation of what the character does when using that specific action and then swiftly moves on. Sure, the basic controls become apparent, but it throws way too much at the player for one linear segment. It would have been nice to see separate mini-lessons for each individual mechanic to help welcome players in a gentler fashion. Players are better off sampling some of the other modes and learning from trial and error before trudging through the rough tutorial. Arcade, Boss Rush, Story and Versus (local and online) make up the entirety of the other modes. It’s a typical set of modes for fighting games, but Bullet Ballet could have benefitted from some additional features. When a game has such a unique premise in terms of its gameplay, I find it disappointing to see it limited by the same traditional modes as in the average fighting game. There are also no difficulty settings for Arcade, Boss Rush and Story, but thankfully the fixed difficulty is suitably challenging without feeling unapproachable.

Arcade mode is the usual arrangement of fighting enemies in sequence, but oddly enough, you regain only a set amount of health after each battle, rather than healing fully. This is also the case for Boss Rush mode, but it seems more fitting for a mode like Boss Rush where endurance is emphasized. Story mode is also quite disappointing, as the narrative itself is flimsy and only made more disappointing from bland writing. This may not bother some, but after some complex story modes from Arc System Works games like Persona 4: Arena and the BlazBlue series, the story here feels extremely bare-bones. Local Versus features a training mode alongside battles against AI or a second player in couch multiplayer. Couch versus was a surprising amount of fun, and facing off against enemy AI is also great when still learning the ropes. I am unable to speak for the stability of online matches, as I was unable to find anyone through matchmaking during my attempts. Granted, at this time the game is still in pre-release, so this is not surprising. 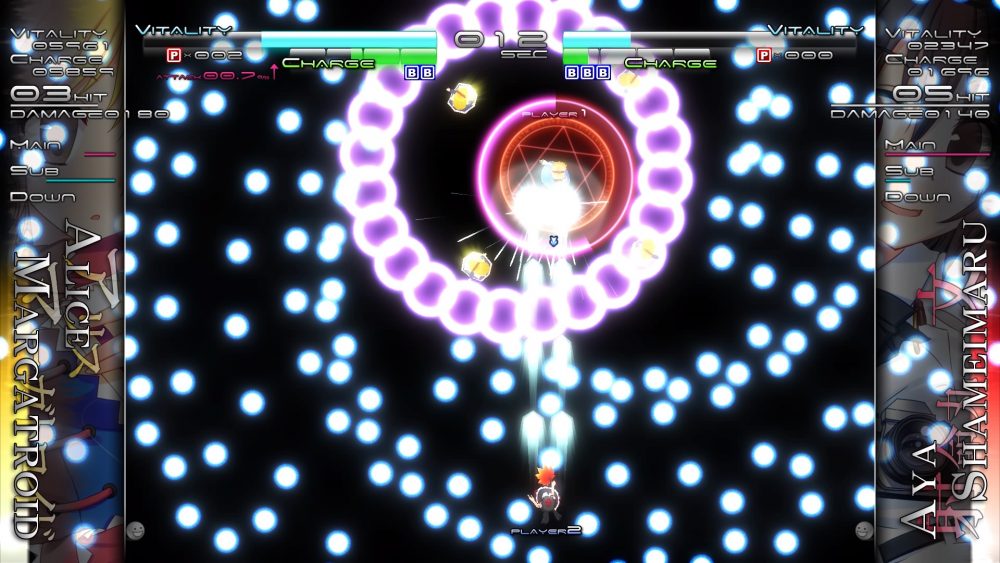 To appreciate the visuals in Touhou Genso Rondo: Bullet Ballet, you need only watch a round and admire the sheer splendour of bullets dancing across the screen. It’s a marvel to spectate, and even more so to watch while playing. Character models are miniaturised 3D models that look clean and polished, but are overall fairly simplistic. Granted, the top-down perspective eliminates many opportunities to admire the character models, and they’re hardly the focus anyway. Attack animations are the star of the show here, and they perform admirably. Each character’s art in menus, victory screens and Story Mode is very well drawn and add extra appeal to the game’s overall look and feel.

Touhou Genso Rondo: Bullet Ballet is a game that I didn’t realise I wanted to play. Now that I know it exists, however, I’m glad that I had the opportunity to experience it. Blending genres to create something unique and truly special, Bullet Ballet is frantic and a heck of a lot of fun. Sure, its story mode is remarkably bland, and the game could likely benefit from an additional mode or two, but the solid shoot ’em up  gameplay is what will inevitably bring you back for just one more match.