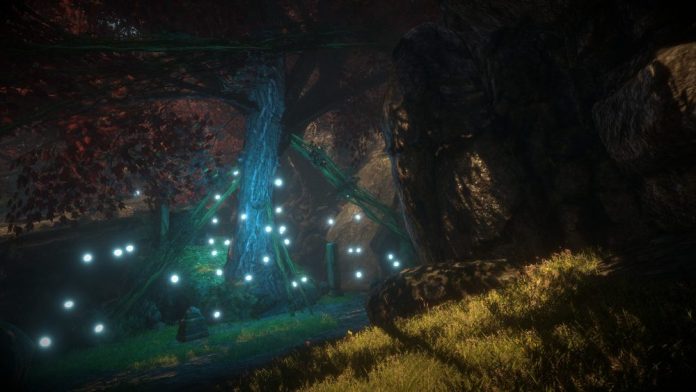 Playing Valley is like watching Wyatt Earp after Tombstone, like sitting down to Day of the Dead straight after The Return of the Living Dead.

It’s not necessarily terrible but it’s so derivative that it invariably dampens the experience of the latter product. Valley is not a completely bad game, but the sum of its parts mirror those of previous – and better – indie games that it becomes an unfortunate exercise in anticipating which aesthetic element or gameplay mechanic Blue Isle Studio will adopt into their own game next.

It is unfortunate that the game is a rehash of almost every popular indie game from 2012 onwards, because it starts off fairly well. The main gameplay that is promptly introduced is exciting, the story is intriguing. So let’s start with the few (there’s only a few) positives to save ourselves from an all-encompassing blanket of cynical video games journalism. For now.

There is little to no backstory in the form of pre-rendered cinematics or storyboard narrative telling. You, the unnamed protagonist, awake in a cave in the Rocky Mountains confused and hungry for discovery. You are an archaeologist by trade, mythologist by nature. The source of intrigue on your explorers path is the “Life Seed”. Generic “source of amazing power,” you’ve been here before, don’t worry. Nothing special.

On your path to the Life Seed, you come across two things essential to the game: audio logs by an earlier explorer on the same path that give exposition to the narrative and the main gameplay mechanic in the game – the L.E.A.F suit. The suit grants the ability to run fast, jump high and generally increase mobility which is on a whole actually rather exhilarating. The suit is upgraded over time; a grappling hook, the ability to run over bodies of water like a mech-Usain Bolt. The suit is incredibly fun to use and it makes traversing each of the game’s sections gratifying and fluid. Even if the suit does look (and even sound) like a disused tech-piece model from Fallout 4. 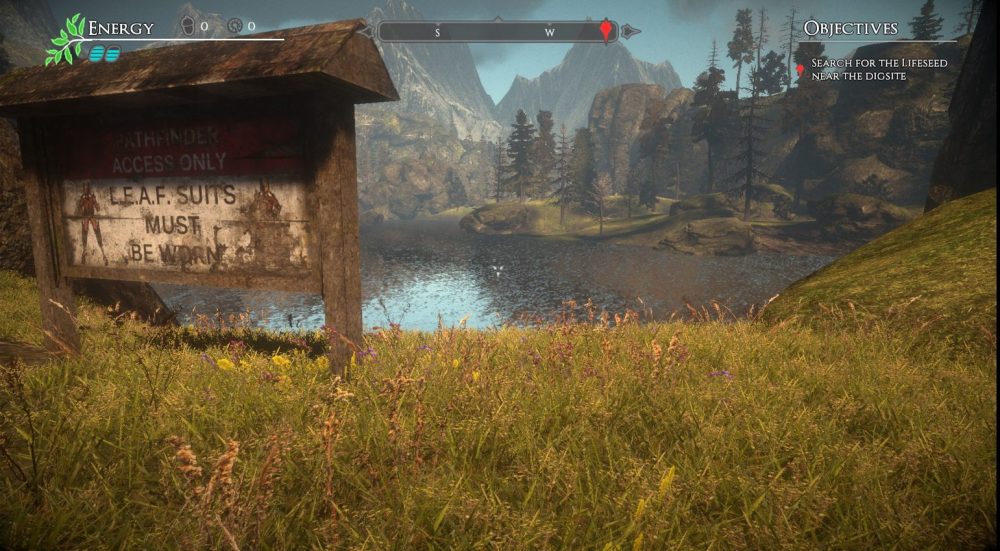 The game looks pretty, most of the time, as well. Textures appear detailed and colourful at a first glance. Whereas the environments are not really that interesting the lighting in particular is fantastic. Light streams through the trees, blinding at times, and it truly looks fantastic. The game presents an authentic pastoral landscape. You can almost smell the grass, feel the wind rush through the tops of the oaks. Almost.

The game cannot manage this spectacle without frame-rate drops or clipping however. There was one notable instance where I clipped through an object that essentially sent me back to the start of the particular section of the map I was exploring. Frustrating to say the least. Not game-breaking issues but certainly level-breaking and fun-hampering.

The texture mapping is deceptive however. It soon falls apart when really analysed. A closer look at trees, foliage, walls, tunnels etc and the game turns ugly really quick. Every time your gaze zooms into certain objects and sections of the environment it starts to look blander and muddy. After a while, simply nothing stands out and it begins to grind early on.

The music is also pretty fantastic. Its composition mirrors the development of the narrative, its soundtrack makes a perfect accompaniment to the gameplay at hand. There’s not much to add to the music, it’s just simply very solid indeed.

However – and this is a pretty substantial however – even just an hour in, the game already looks like a mish-mash of half a dozen other games. Valley introduces the components of the game in a timely fashion and they invoke such a sensation of deja-vu it warrants a disappointed grumble. There are strange light creatures reminiscent of Journey, a forest straight out of Firewatch and a mystery and an emphasis on walking-based discovery akin to Dear Esther and Everybody’s Gone to the Rapture. The game is never as good as any of these games and because it seems to rely so much on their achievements, it never feels fresh or original. 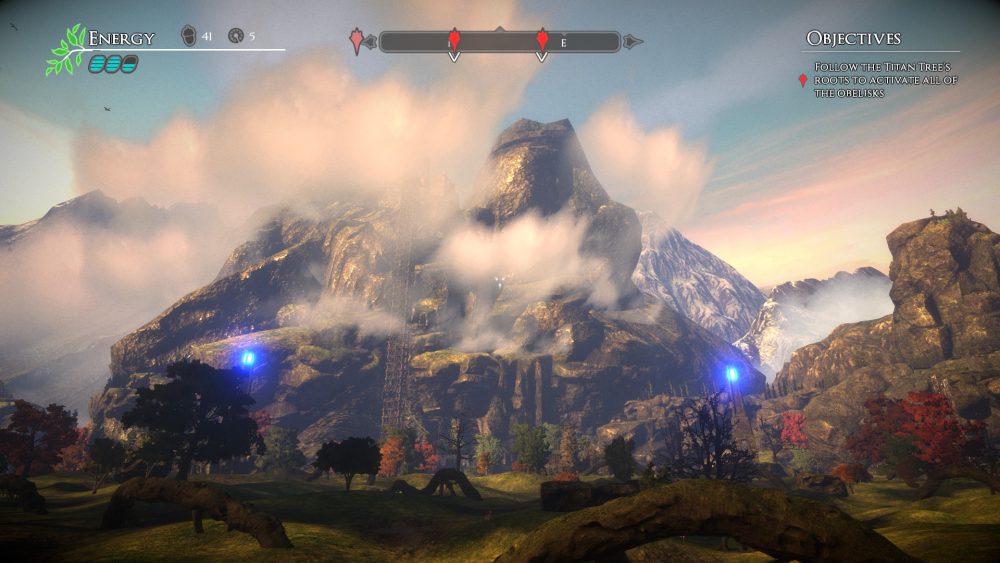 Aside from recycling more material than a city dustman, Valley suffers from another major problem in that its mechanics seem to be at odds with the game’s presentation and the ability to explore the aesthetic. The main thesis of the game is movement – fast movement over the valley, across the waters. So it’s puzzling why the game also seems to promote a slow, deliberate study of the environment and the events that happened in it. It’s a schizophrenic approach that almost ruins the game. The game pushes you to gain momentum and navigate the valley at high speeds but then looks like a slow walking simulator at the same time. You’ll probably just end up not wanting to do either of them.

A last (I promise this is the last moan at the risk of sounding like the Karl Pilkington of video games journalism) major problem with Valley is the checkpoint system. Because it doesn’t exist. Each section of the game is broken up by certain locations. There’s roughly 40 mins to an hour of gameplay in between each marked location. There’s no checkpoint system in between these sections, therefore if you lose all your energy from your suit even towards the end of one location you’ll have to navigate through 3/4 of it again when you start again. Doors will remain unlocked etc. But still. It’s another frustrating element of a game that does start with a decent idea in mind.

Valley is simply a missed opportunity at creating something with a decent narrative, good movement mechanic because it relies so much on the DNA of earlier games. You can literally point to each strand and go “hey, look, this bit is like (insert recent indie game i.e. Journey, Firewatch etc.). The game would have benefitted from a more original script, a lusher and more dynamic presentation and world just to say the least.

If you’ve never played the likes of the game mentioned in the above, you’ll get on with Valley. But if you have played those games, don’t bother picking this one up as well.

Valley is available on PC, PS4 and Xbox One. We reviewed the PS4 version.