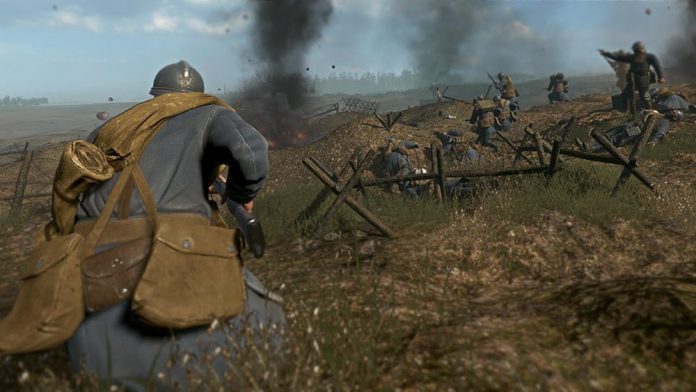 The Battle of Verdun began in February 1916 and is recorded as the lengthiest battle of the First World War, lasting ten months and claiming around 700,000 dead, wounded or missing soldiers.

While Battlefield‘s latest installment goes for the blockbuster approach, Verdun revisits the battle and others like it with a focus of capturing the real essence of trench warfare. But what is noble in theory is clumsily executed in a game that succeeds in capturing the fear and strategy of the Great War, but also the boredom.

Verdun offers four different modes to play: Frontlines, Attrition Warfare, Squad Defense and Rifle Deathmatch. Frontlines is where you will spend the most of your time and is by far the best way to play. Two teams take turns to cross No Man’s Land with the objective of taking the enemy trench. Simple enough but far more difficult in reality and often feels like a game of tug-of-war on a much larger scale.

If you fail to take the enemy trench, you will be forced to retreat and defend your own. Once the enemy is repelled, its back over the top to push your advance. It’s very rarely a straightforward advance from trench to trench and at times it feels like you’re getting nowhere. But then again, that was often what trench warfare felt like. It was a constant push back and forth until something gave in. It’s a take on the classic Conquest mode, but with an emphasis on momentum rather than kill streaks.

This is where Verdun may be a bit difficult to swallow. This is not a game for those hooked on the experiences of the popular giants of Battlefield and Call of Duty. If you run around waving your gun in the air, hoping to be king of the battlefield, you’ll only find yourself stuck in a respawn cycle more times than you’d care to mention. Patience is a virtue with Verdun. 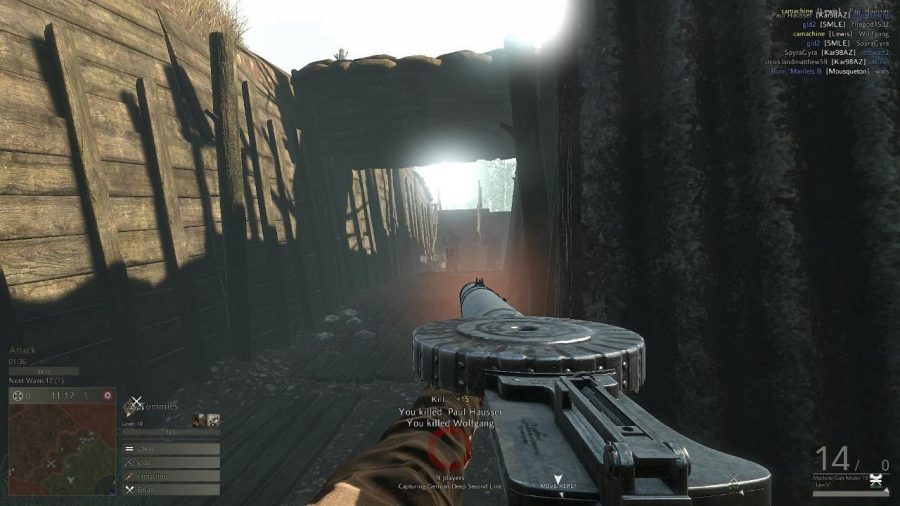 The one-shot kill system encourages a more tactical approach. You’ll find yourself crawling across the battlefield to keep yourself as hidden as possible, moving from shell hole to shell hole, slowly inching your way closer to the enemy foothold. There’s a lot of time spent waiting for something to happen, whether it’s for the enemy to attack or for the all clear to move forward. The time and effort it takes to just get to the trench, you won’t be in a hurry to get shot. What players need to submit to is Verdun‘s different style of playing, taking things slowly and carefully and travelling with greater numbers.

Where Verdun emphasises the slow approach, it similarly encourages teamwork. Sticking with your squad is the best way to survive. You are constantly prompted to stay within the field of influence of your designated NCO (Non-Commissioned Officer) but you’re not penalised or rewarded either way. They simply act as the central node for your group, and while its a good way to try and keep players together, it can feel like a chore more than an enhancement.

There is also a selection of orders that you can dish out to your squadmates, to try and coordinate some sort of attack, but these are a bit clumsy to use and for the most part you will just find yourself ignoring them. The principle is that you don’t set off on your own and wait for your fellow soldiers to spawn around you before taking the enemy head on.

But despite its success in capturing the essence of a First World War battlefield, even if you can get used to the style of play, the reality is that Verdun suffers from a lot of imperfections which leaves it feeling like a mess. The controls feel heavy. Movements feel stiff and slow. There is even an indicator as to who is an enemy or an ally, unless of course they are shooting you. Thank god there wasn’t a penalty for Friendly Fire. Even when you get shot, it barely registers. Verdun goes to great lengths to keeping things real, but along the way it has forgotten some of the basic principles of first person shooters. 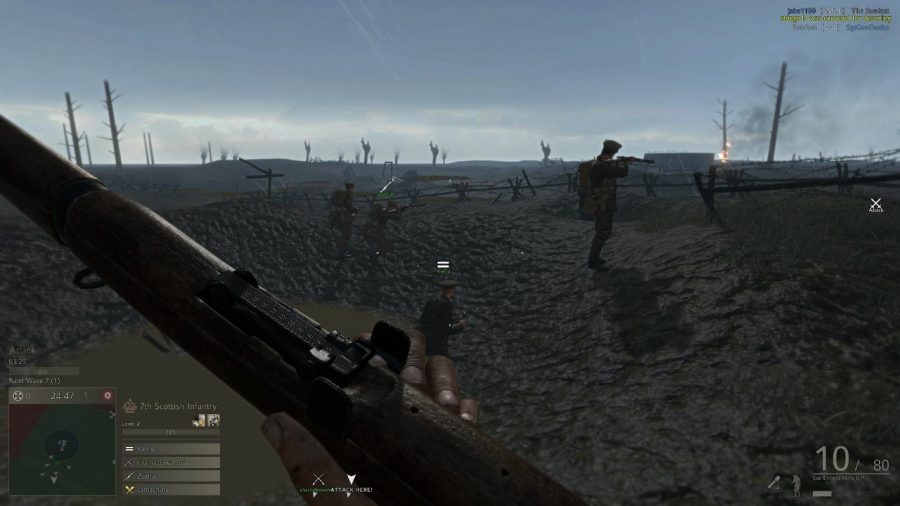 But the truth is, even with these issues, they wouldn’t be as much of a problem if it weren’t for the appalling framerate. Looking down the sights of a barrel is hard enough when your vision is impaired by the low resolution graphics. Enemies in the distance are little more than a blur that blend into the environment and even with a scope are difficult to spot.

But bad visuals don’t ruin a game. A camera that jumps around while you move your aim does and that’s before your session suffers from the frequent lag. Enemy soldiers often abandon their running animations and teleport across the battlefield, and at times, bullets just seem to pass through them without doing any damage at all. It could be forgiven if it didn’t happen so often and though these are issues that could patched up with a couple of updates, at present it can make Verdun unbearably frustrating to play.

The thing is, Verdun does start to grow on you. It can feel like an arduous task to play and there are many things that the developers need to take another look at. There is a distinct lack of variety. The maps, though differ in design, all feel the same with their aesthetic and even the Frontlines mode begins to drag after a while after you’ve sat through a couple of 2o to 40 minute sessions. But the stripped back, gritty and generally authentic approach can make victory feel so much more rewarding.

Each session is a struggle, both good and bad. Watching a comrade get shot beside you makes you tense up and shift to a better position. You debate whether to stay put or push forward. The lack of music and just the sounds of gunfire and artillery provides a chilling atmosphere, especially when you are sat in your trench not knowing from which direction the enemy will come.

Verdun will be classed as something of an acquired taste. It’s a refreshing change from the rest of the first-person shooters and goes to great lengths to ground itself in the reality of what trench warfare would have been like. And while it has its moments, it is riddled with imperfections that can fatally damage the player’s experience. Hopefully in time, with a few patches and time to adjust, Verdun will offer a suitable title for those looking for a more authentic experience. But for now, it may be better holding the line and staying in the trenches.

Verdun is available on PS4 and PC. We reviewed the PS4 version.