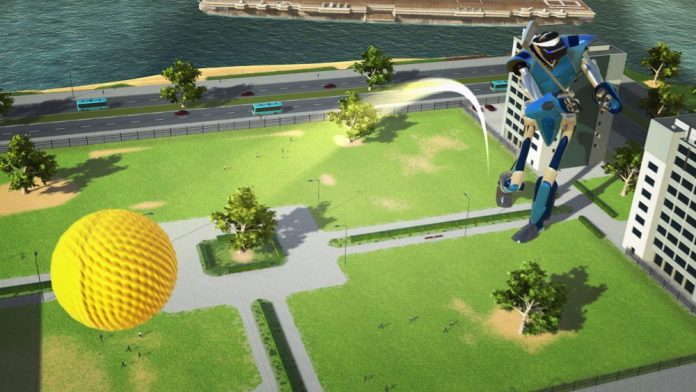 In all of my years spent playing the countless rounds of Mario Golf and the odd Tiger Woods game, never did I think, this would have been better with massive robots.

Granted, that could be due to a lack of creativity and not enough exposure to Transformers as a small child. And yet, here we are: 100ft Robot Golf is exactly what you think it is; people (and sometimes corgis) in giant robots playing golf. Between swinging for birdie on the moon and destroying virtually everything in sight, developer No Goblin deserves plenty of credit for coming up with such a ridiculously intriguing premise. But is a fantastic premise enough to warrant a purchase?

100ft Robot Golf presents you with two modes of play – Quick Play and Campaign. Quick Play offers solo golf sessions, as well as multiplayer both locally and online. While the game lacks an actual tutorial, the campaign does a decent job of introducing you to each of the characters and their unique swing mechanics. After a bit of trial and error, each method can be figured out in a short amount of time. If you’re looking for some practice, however, your best bet is to run some drills on your own in Quick Play. These modes span over a total of 36 holes, split evenly over four maps – city, mountains, underwater and the moon. There is certainly room for more courses to come as DLC, but right now the total course count feels a bit small.

Local multiplayer is an absolute blast. Playing split-screen with a friend was hectic fun as we swung our clubs at one another to be complete nuisances. Regarding online play, I was unable to find any groups to play with during my numerous attempts at matchmaking. I cannot say whether this was due to the small player base or some issues with matchmaking; either way, I am unable to speak for the quality of online matches. This was disappointing, as I presume a bunch of robots all wreaking havoc would be quite the spectacle.

Each character has unique abilities to use on the course – one assists in destruction and the other impacts the player’s ball mid-shot. Unfortunately, the ball-related abilities have no clarification as to what they do, and your only way to decipher their purpose is to use it properly and see it make a difference. Destruction-related abilities also lack an explanation, but spawning a sword or firing missiles is pretty self-explanatory. Floating around the course as a giant robot bent on causing chaos is genuinely fun. I found myself entering Quick Play to practice finding the best route to each hole, and this often involved levelling a skyscraper or two. Or ten. 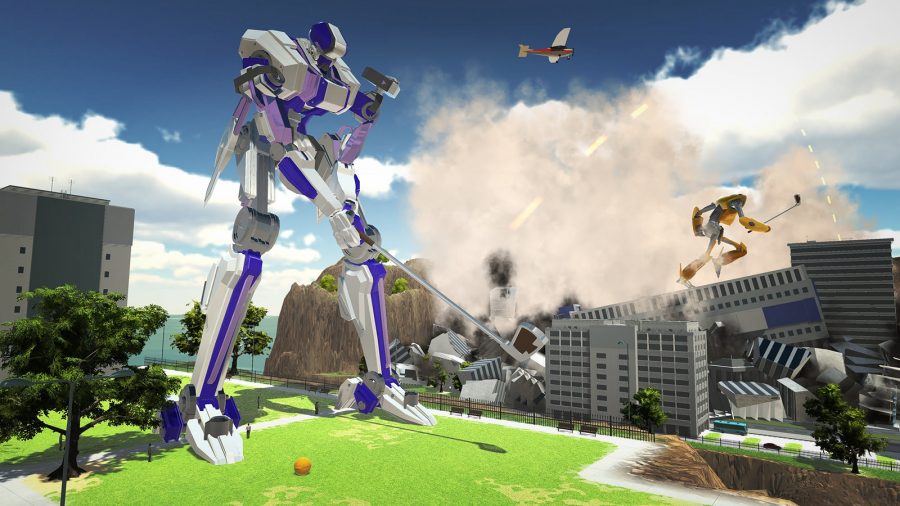 The Campaign mode is easily 100ft Robot Golf’s biggest allure; featuring old-fashioned anime cutscenes with intentionally bad writing and voice acting, the story never takes itself seriously at all. That’s actually a great thing – the writing is generally quite funny in that respect, and if I wasn’t grinning then I was rolling my eyes in appreciation. Unfortunately, the campaign is quite short, lasting only a few hours. Medals are awarded for how quickly you complete a course, your number of strokes and your total points (earned based on your ranking compared to your AI opponents). They can then be spent on customisable parts, thus adding some replay value if that interests the player.

Throughout the campaign and in Quick Play, you’ll encounter two ways to golf – the first being typical stroke play, and the other being a real-time version of first to the hole. The latter puts robots in a race to be the first to sink their ball in the cup, regardless of their stroke count. It comes across fairly quickly that many of the game’s unique mechanics are designed around this mode, rather than stroke play. Destroying obstacles scattered throughout each hole and interfering with opponents by hitting them or blocking their ball mid-flight are significantly more beneficial in real-time than in stroke play.

On numerous occasions, I found some issue with the finicky nature of 100ft Robot Golf’s aiming mechanics. I would often try to delicately move the aiming tracker when planning out a shot, only to have the tracker jump around or resist moving in the direction I indicated. This became especially annoying when I was nestled up against a rock or tall piece of land and wanted to shoot sideways or even backwards to get to a better position. In these instances, the camera also instinctively jumps around to follow the aiming tracker. Markers show in which direction the pin is located, but locating the marker itself is sometimes a hassle when the camera zooms in too far.

Course commentators, voiced by comedy podcasters the McElroy Brothers, provide witty quips throughout your golfing ventures. Unfortunately, the variety of these one-liners is very limited and comments get repeated very frequently. In some instances, I found that the comments did not even specifically relate to the golfing that was taking place. This is less of an issue in Campaign, where I found that some comments were perfectly on the nose and well-executed. Still, it would have been nice for No Goblin to utilise the McElroys further and provide more dialogue options. As it is now, much of the commentary falls flat from repetition. 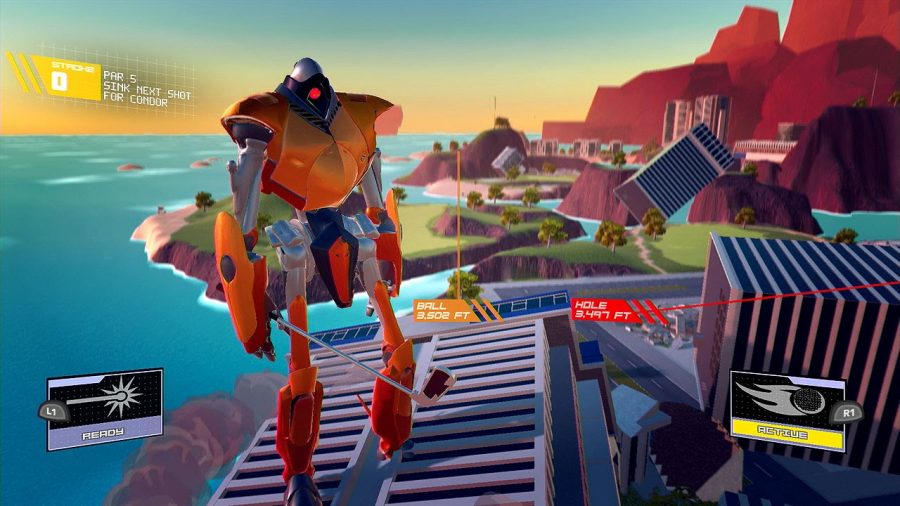 There is no denying that 100ft Robot Golf is charming and has its fair share of amusing moments. Campaign mode, while short-lived, features some genuinely funny moment due to its cast of quirky characters and its purposefully atrocious voice acting. Shoutout to the five Corgis that operate a robot in true Power Rangers fashion. However, the shortage of modes, courses, commentary dialogue, and the short length of the game’s campaign may leave players feeling short-changed. On top of that, the troubles I encountered with aiming leave 100ft Robot Golf feeling like it lacks a certain level of polish. Ultimately, 100ft Robot Golf provides some solid fun, but it lacks the content necessary to keep golfers on its courses for the long run.