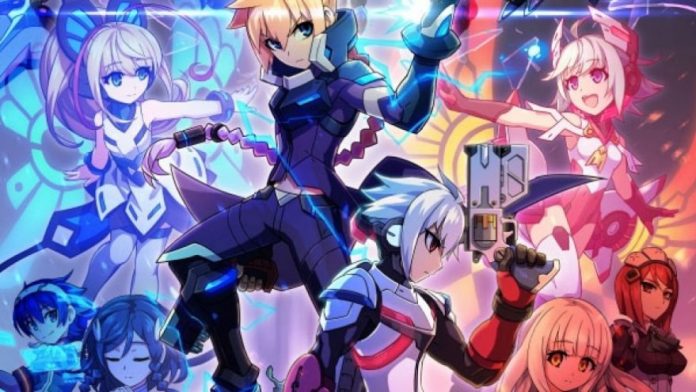 Mighty No. 9 may not have been the Mega Man game everyone wanted, but there is a new game in town that may satiate those fans’ appetites.

Inti Creates, the developers behind the fantastic Mega Man Zero franchise, have created their own spiritual successor to that with 2014: Azure Striker Gunvolt. The first game was a fantastic homage to Mega Man Zero so let’s see how the team stepped up their game with this sequel.

Azure Striker Gunvolt 2 takes place in a futuristic city on the verge of a political crisis. Superhuman entities known as “Adepts” live out their lives in fear from the community after the last game’s incident wherein a terrorist organisation tried to create a paradise for them in a typical evil-trying-to-do-good in a messed up kind of way. Now a new group is trying to do the exact same thing and Gunvolt, an Adept with the power of electricity, is out to thwart their nefarious deeds. Not only him, but also the son of a scientist, Copen, is also trying to stop this crew in order to rescue his sister, Mytyl.

The plot is simplistic enough, mirroring the overall archetypes of the X-Men series. You know, the mutants vs non-mutants kind of thing where evildoers are trying to make things better for mutants in a flawed attempt at doing the right thing. Conversations appear throughout a mission, but because it’s voiced in Japanese I never got a good sense of what was going on. Trying to read the subtitles meant I’d have to stop what I was doing so slowed the pace of the game. Normally, I like Japanese voice acting, but only when I don’t have to avoid traps and enemies at the same time.

Azure Striker Gunvolt 2 can best be described as an action platformer – in the same ilk as a Mega Man adventure. Two characters, Gunvolt and Copen, are both playable, waging their own wars in two campaigns side by side each other. Gunvolt, an Adept, plays exactly as he did in the first and there’s a bit more to it than running around and shooting foes. His gun shoots darts, of which three can be distributed between opponents. Once tagged, he can zap them with his electricity. Other than that, using electricity while jumping will let you glide – and if you stand still, attacks will phase through you. Of course, this eats up energy, but it can easily be replenished with a single double tap of the d-pad. It’s easy to keep tabs on during the normal stage, but a bit trickier when trying to balance energy in the many intense boss fights. 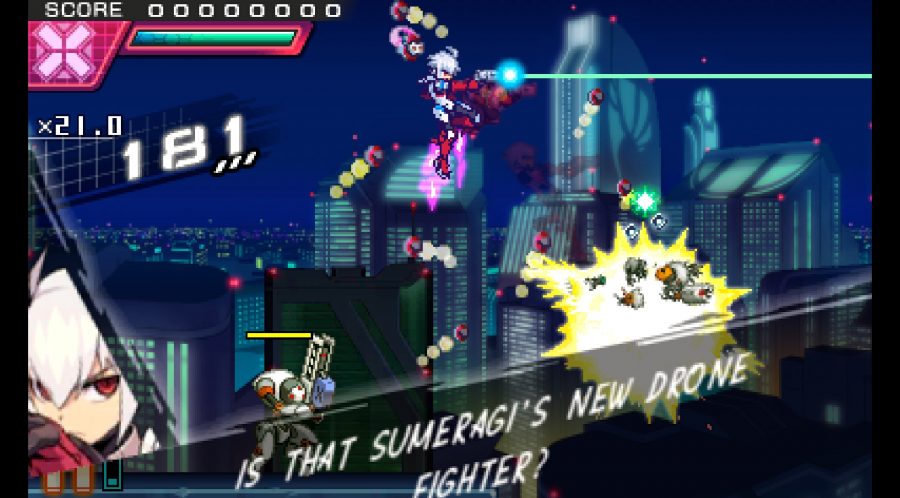 Copen, on the other hand, is not an Adept. Instead, he is aided by a technical suit and a floating robot. His gun shoots a laser, he can zap enemies with a charged electric surge from his robot friends, he can dash into enemies in order to auto-target them, and he also has the same phasing ability as Gunvolt. Of the two, it was refreshing – and frankly much easier – to play with Copen. His powers seemed a bit more flexible and powerful, plus the gun modifiers gained from defeating bosses made more sense in a Mega Man sort of way.

With that said, I should mention both crusaders gain boons from bosses. For Gunvolt, it changes the array of his darts, but his special electric charge stays the same. For Copen, his beam stays the same, but his robot specials mirror that of the boss’ powers. On the bottom of the screen are actual skills. Gunvolt gains them through leveling up while Copen only has two settings: an attack and a heal move. Gunvolt’s range similar from alerting attack abilities as well as defensive moves. Other than that, levelling up doesn’t seem to increase any kind of stats for either hero.

The real upgrading comes with synthesising equipment gained from parts found in stages. Find enough scraps and your team can make you items to boost defense, health, or provide some kind of special property like gaining more experience for instance. Playing a mission well, along with uncovering secret capsules, will make this task easier, but even the best players will have to retread stages in order to get enough loot for synthesis. Azure Striker Gunvolt 2 isn’t particularly long in general, so replaying stages pads out the game, but I would argue that the second time around is actually more enjoyable. Anything past two times though; well, then it marches into tedious territory.

Azure Striker Gunvolt 2 is a short, but well crafted experience that plays it safe. That’s not to degrade it at all as I feel it is technically better than the original, especially with another playable character aboard. It’s not as fresh, but the gameplay is still fantastic albeit perhaps a bit easier for the hardcore gamers out there. Easy or not, Azure Striker Gunvolt 2 is welcoming, and for Mega Man fans looking for the return of the Blue Bomber, this is the next best thing.