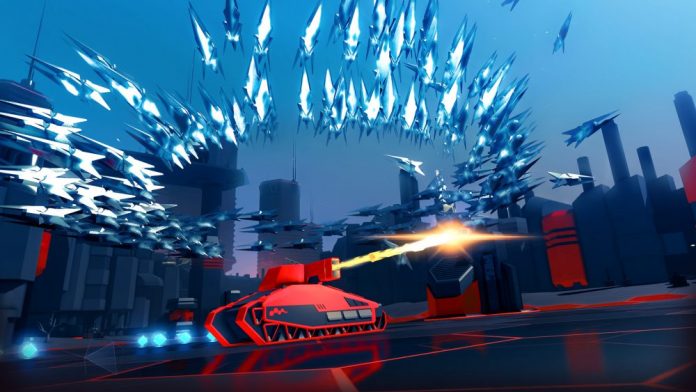 Battlezone is a title that finds a good home with PSVR.

A modern take on an old arcade classic, this game succeeds in offering an immersive experience. However, what is there to experience can get stale after a while, no matter how deeply connected it felt initially. There are plenty of good things going on here, it just feels like it could’ve been more. If you’re looking for a reason to buy a PSVR, Battlezone can sway you, but not completely.

If you’ve ever wanted to feel like you were piloting a tank, look no further. Battlezone undoubtedly has one of the most immersive worlds on PSVR. The tank’s cockpit feels massive, and being able to look around and see radars, gauges, ammo counts and the like makes it that much more enveloping. Everything in the game world has a wonderfully 80’s veneer and it all pops with a great colour scheme. The team at Rebellion understands this game’s arcade origins, and they respect that, all the way down to the “Insert C.O.I.N.” command. The game sounds great, plays smooth, and looks clean; but outside of pulling you into an alluring VR world, there isn’t much new fun to be had.

Battlezone offers no competitive PvP options, but you can play cooperatively online. No matter if you play solo or with a group, the campaign is your only choice. The map is made from interconnected hexagons, from which you create a path to the end. You can choose to be linear or non-linear, depending on how many resources you feel you need. Every step you take, the enemy grows stronger, so you’ll have to gauge what resources are worth going out of your way for. It’s best you take every chance you get, though, as some upgrades like high-powered arsenals and healing powers feel almost necessary later on. There is a sense of RTS to the campaign, forcing you to think ahead and not just on the current mission. The action inside each mission is captivating and engaging, but unfortunately it doesn’t take long to become repetitive.

Your objective for any given mission is quite standard, ranging from “blow everything up” to “protect this… and blow other stuff up”. Given that you control your tank with the Dualshock 4, there isn’t much motion sickness here. I found myself moving my head around a lot just out of curiosity, leaving my teammates stranded while I stared at the inner workings of my cockpit. The enemy variety isn’t vast, as you’ll battle enemy tanks, flying drones, and giant turrets. If your movement across the campaign hex-map is slow, the enemy can fortify its forces enough to send out a boss tank. Without giving too much away, just… well, just try to avoid that happening, alright? Apart from that, combat gets a little stale and has little variation. It’s upsetting, seeing as how engaging some of these fights feel. 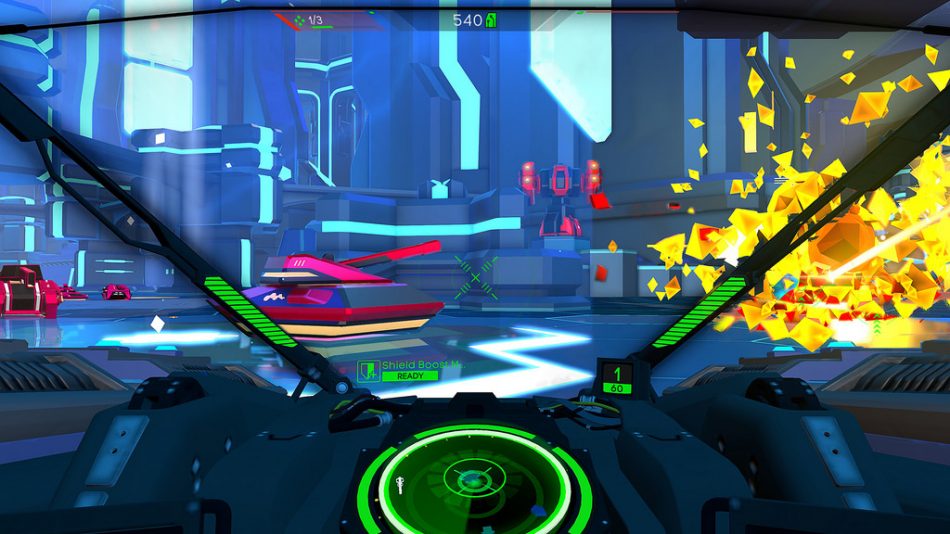 Your tank selection is basically effected by how quickly you want to move vs. how much armor you want. Like most games, those traits work inversely. No matter what you choose, however, sitting down inside them feels amazing. The view that is presented to you inside of your tank is possibly the best illusions PSVR has to offer right now. It creates the sensation you’ve wanted VR to give you, and it is a highlight of the game. The upgrades you find will ultimately decide how you fight. With long range guided missiles, or more up close and personal. Each has its ups and downs. It’s a real shame there is no PvP in Battlezone, as it has the components for some intense showdowns. Engaging AI enemies, even with friends, has its limits. Despite the fact that each mission is procedurally generated, you still want more variables in the game.

After you take your headset off, you don’t really feel like you want to tell everyone about it. Despite how the world engulfs you, the action falls short of matching that feeling. Although Battlezone is one of PSVR’s bulkiest titles, it fails to drum up replayability in the long run. This looked to be one of the more noteworthy launch titles, but can’t quite redeem its asking price. It is well made, sounds great, and looks beautiful but will not sell PSVR on its own. If you’re looking for that one game to make you pull the trigger on PSVR, wait a bit longer. Though Battlezone isn’t a bad addition, it’s not a system seller.

Battlezone is available on PS4.