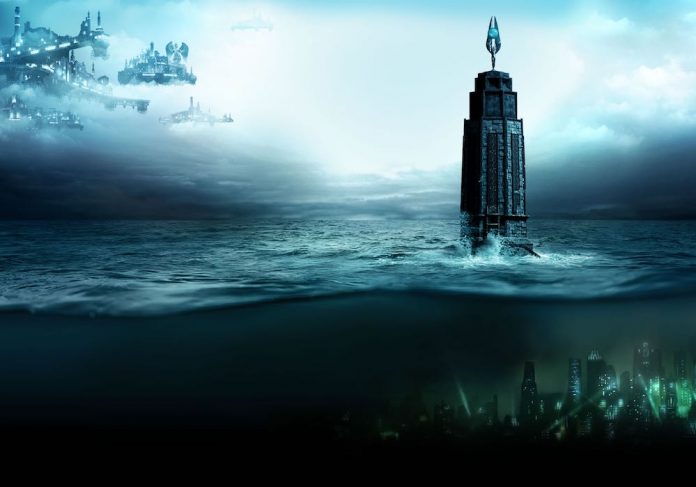 For some reason, the Bioshock games escaped me.

For years those three games sat in my backlog, never to be touched. Despairingly, I accepted the fact that I’d probably never play them. But I was wrong. Recently, I noticed that these amazing masterpieces had been remade. 2K found the pieces, they had the technology, they rebuilt them. They are now better, faster, stronger than they were before. Finally, I had an appropriate time to play the series, so I did. Subsequently, what the original Bioshock showed me was quite astounding.

Bioshock was released in 2007. For reference this was one year into the lifecycle of the PlayStation 3. Video Games were entering a new stage in their young adult life; new technology was beginning to advance, games were getting prettier, and as a whole, the industry was on the road to total domination. Moreover, games were in a huge changing period from a design standpoint, and although I had never noticed this before, Bioshock showed me just how much game design has changed in the past 10 years.

To begin with, I realised that games today are reliant on so many cheap, gimmicky mechanics that cheat the player through the entire experience. These mechanics consist of enemy scanners, for example, allowing the player to see enemies through walls and plan their next move accordingly. Another example is a traversal mechanic, such as a sprint or a teleporting ability. This allows gamers to move too quickly and too freely through a level. Even the best games are guilty of these design sins. The Last of Us, Killzone Shadow Fall, Far Cry 4, Dying Light; I struggle to find games of recent years that don’t have these kind of “cheats” in some way or another. In 2007, these kind of mechanics hadn’t been regularly brought in yet, so at first, the absence of an enemy scanner can be frightening. I actually had to use my human senses to overcome a challenge. In Bioshock you can hear enemies around you, but have no idea where they could be. This means you have to listen for prompts that the enemies may give you, think about what you’ll have to deal with and plan out your next move. This is a brilliant change; it makes the player think, learn, and adapt to deal with problems. Most of all, it makes the whole process so much more satisfying if you can successfully suss things out on your own. 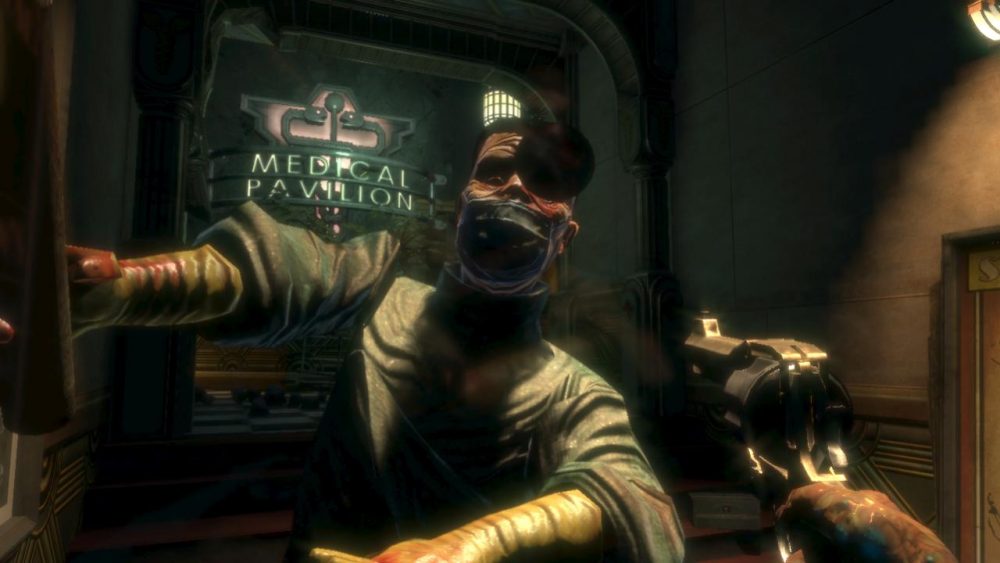 I was also surprised to note that there is no ability to sprint in Bioshock. At first I was afraid (I was petrified) that I’d be annoyed by how slowly I’d move from point to point. After the first couple of hours, I was happy there was no sprint ability. From taking my time, looking for collectibles and things that might be of use to me, I was more appreciative of where I was and I felt I had more tools at my disposal. I was exploring Rapture meticulously, seeing every detail that went into the design, looking at the variation and characteristics of each area. Without an ability to sprint, I actually enjoyed the game more. This stands to serve the point I’m trying to make here: games in the present day are brilliant, but the communication between player and game has been broken down so that the game can show you how it wants to be played. Instead, games should allow the player a myriad of ways to experience it, then let them play how they want. A game doesn’t need to be a sandbox to allow for variation. On that point, the appreciation of good game design has also broken down. Game designers should focus more on the basics and the simplicities that Bioshock gets right, instead of focusing on the architecture of their in-game buildings.

Furthermore, modern games are packed full of nothing. You may recognise some of these pointless features of modern day gaming: open worlds for the sake of being open world, 50 different types of collectables that have nothing to do with the story or characters, worlds that are so needlessly huge, and side quests that are repetitive, boring and never offer anything advantageous as a reward. All of these things are put into games now to make them seem more “full,” when in fact, they make the game feel empty. How often are you told in the build up to a release that a game will deliver a map double the size of the games predecessor? How often, then, are you met with a game that ultimately takes you to half of that “enormous” world, and then doesn’t bother to make the other half intriguing in any way? The original Bioshock is so good at cutting out all the fluff. If it isn’t necessary to the gameplay, the mechanics, or the brilliantly told story, it isn’t in the game. This is why I believe modern game design could learn a few things from looking into the past.

Lastly, and I suppose overall, games today are holding the hands of their players and guiding them through an experience when it should be about the player achieving things for themselves. I could name 10 shooters that have been released in the past five years that you could literally run through and not have to kill a single enemy in the campaign because your AI co-op team can gun them down for you. Games nowadays are far too easy. I’m in no way saying we should go back to the days of early platforming like Mega Man and Castlevania, where you feel like the game is mugging you with every death. But with Bioshock, I found that it struck a beautiful balance of difficulty and satisfaction. I was constantly loving how the game would present me with a way of dealing with a problem, by say, giving me a new plasmid, then giving me a situation in which I could use the plasmid I had just learned about. Later, when the game had introduced more and more of its core mechanisms, it would show me a problem and let me choose how to deal with it. This goes back to the earliest days of game design for 2D platformers. 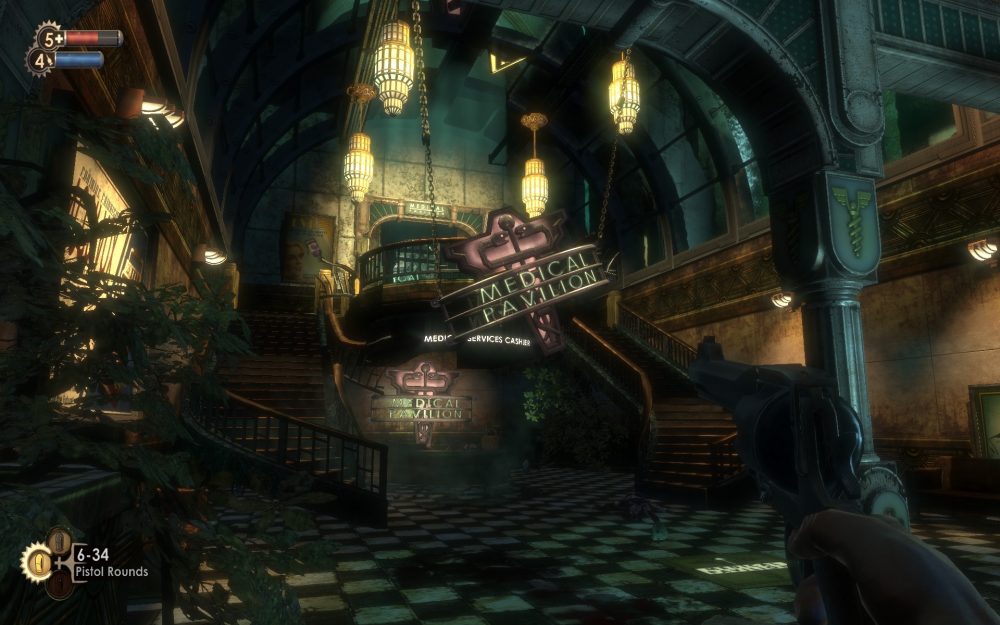 When playing an open world action game today, you will be met with tutorials that will stop the game, and tell you straight out how to overcome an obstacle. Upon playing the first Mega Man, the game presents you with obstacles. It then communicates with you slyly, showing you a glimpse of how to get over the obstacle in front of you. Without insulting your intelligence by telling you exactly what to do, it lets you feel smart by giving you a hint, then letting you take the initiative. This game design is always going to be superior because it allows for satisfying moments when the player knows they’ve done the right thing. A child in the early years of school will always love when they work something out on their own because it makes them feel smart. When they receive a sticker or a prize, they’re going to feel good about themselves and want to answer more questions. It’s basic human nature at work.

To sum up, game design today can be so astounding. It has the tools and the technology and the talent necessary to make games that could break the mould over and over again. Instead, by playing a game that was released nearly a decade ago, I’ve learned that game design has taken a step back. The communication between the game and the player has vanished, yet that’s what made some older classics so amazing. Game designers should listen to the challenges that older masterpieces like Bioshock issue them and use the strengths from them for the better. Without stepping on another game’s design, you can use the core aspects and design methods to benefit another title. After all, if designers aren’t trying to best each other then what’s the point?