Way back in February 2015, just a mere month after GameSpew was born, I reviewed Criminal Girls: Invite Only for the PS Vita.

It was a weird game in which you had to “reform” a bunch of female convicts condemned to Hell by “motivating” them – an act which basically had you rubbing your touch screen furiously as your band of girls lay blushing in provocative positions – but once you’d got over the ridiculousness of it all, it was actually a fairly entertaining RPG. Well, here we are just over a year and a half later, and somehow, there’s now a sequel. However, whilst Criminal girls 2: Party Favors is unsurprisingly just more of the same, with the original title being such a unique experience, it’s not so much of a bad thing.

The déjà vu begins as soon as you find yourself once again in the shoes of a hapless reformation agent awakening in an unknown location. After meeting and persuading the bevvy of female “delinquents” that you’re in charge of to follow you, the adventure truly begins, and quickly you realise that the gameplay hasn’t really changed one bit.

You’re still trawling around fairly linear dungeons with the odd excursion off the beaten path to flick the switch that opens a door barring your progress or pick up some loot from a chest. The combat remains the same enjoyably random if not sometimes frustrating affair of each of your girls offering up their services for you to select from, of which you can choose just one per turn.

“Motivating” your girls is still as repetitive, suggestive and sordid as it’s ever been as you rub them up to learn new skills. Hell, even much of the music is just ripped straight out of the first game and reused unashamedly. If you’ve played Criminal Girls: Invite Only then, you’ll slide into Party Favors like feet into a well-worn pair of slippers, but there are at least a few tweaks made to assure you that this is indeed a sequel and you’ve not just booted up the original by mistake. 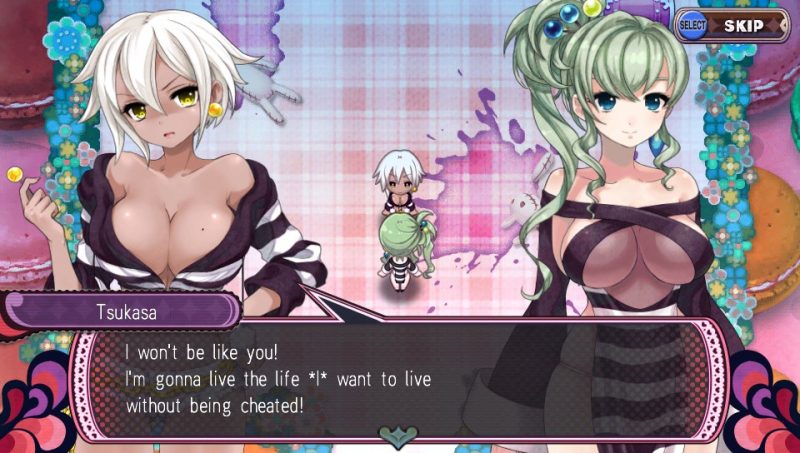 First and foremost, it’s obvious that the visuals, at least when you’re out adventuring, have been greatly improved. The low-res sprites of the original are gone, replaced with wonderfully drawn characters that are much more visually appealing. In fact, the whole game seems sharper and more vibrant, making use of the PS Vita’s beautiful screen.

Those that like a more laid-back experience will also be happy to find that Criminal Girls 2: Party Favors features an easy mode, allowing them to make their way through the game without having to engage in long bouts of grinding to overcome pesky bosses or general difficulty spikes. A couple of minor changes have been made to the “motivation” system too, such as the ability to complete the sequences with the analogue sticks rather than touching the screen, and being able to choose an affinity between S & M for the skills that are obtained. As you can probably gather, none of these changes are transformative, but they do make the game more accessible and engaging which is never a bad thing.

Mentioning S & M, the cheekily-named skill affinities are indicative of a slight change in tone in Criminal Girls 2: Party Favors. Whilst in the first game the acts you engaged in to “motivate” your band of female wrongdoers were largely glossed over, here, they’re straight-up acknowledged as being sadomasochistic. Despite this, and the dark premise of the game however, it retains the same comical overtones of the first title, making it an entertaining affair with plenty of humour. It helps that the cast is a varied bunch, and whilst the story never develops into something you’re going to remember in the long term, you’ll at least enjoy your time spent with them while it lasts.

It stands without reason that fans of the original title looking for more sleazy action will adore Criminal Girls 2: Party Favors, despite it often feeling like you’re simply re-treading old ground. With its improved visuals, standalone story and increased accessibility, it’s the perfect starting point for those that are intrigued by the series to jump in as well. It’s quite simple, ridiculously silly, and still leaves you feeling a bit dirty after playing, but Criminal Girls 2: Party Favors is certainly worth booting up the old PS Vita for if you’re a fan of unusual RPGs and aren’t afraid of a bit of smut.