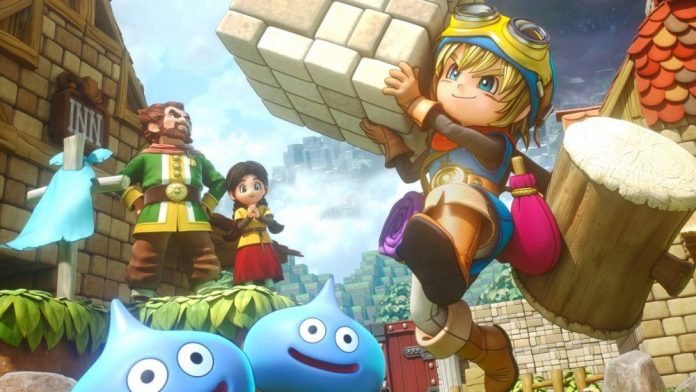 It’s really quite impressive how flexible Square Enix is willing to be with the Dragon Quest franchise.

While recent games like the Dynasty Warriors-esque Dragon Quest Heroes stretch the boundaries of the series, its core games – such as the recent 3DS version of Dragon Quest VII – stay faithful to the traditional JRPG formula. When Dragon Quest Builders was announced in 2015, I was intrigued but ultimately hesitant about the idea of Dragon Quest attempting to try the Minecraft formula. Despite playing on and off since its alpha, Minecraft never sunk its hooks into me too deeply. Dragon Quest Builders, however, adds a level of refinement and narrative, differentiating itself enough to become something new and exciting. I’ll admit: this time, I’m hooked.

Spoilers for a game released 30 years ago: at the end of the first Dragon Quest (known as Dragon Warrior in North America), the evil Dragonlord offers the hero control of half the world to side with him. Typically, the hero chooses to instead fight the Dragonlord, defeats him and saves the kingdom of Alefgard. Dragon Quest Builders follows an alternate timeline in which the hero takes the offer, falls for the trap and is slain, and Alefgard is plunged into darkness.

In a world where humans have lost their ability to build, you assume the role of the Builder, tasked with restoring the world to its former glory. People slowly flock to your village as you rebuild, providing you with quests and humourous dialogue. It soon becomes very apparent that the localisation team had a blast with the writing, as they waste no time making fun of the main character, his quest to save the world, and everything in between. The world of Alefgard itself is beautifully recreated using the three-dimensional block style that Minecraft is known for, but with an added level of refinement from a higher production value. When paired with the beautiful character designs, Dragon Quest Builders’ aesthetic is quite striking.

Perhaps what draws me in is that Dragon Quest Builders feels more like an action-RPG than a building sandbox game. Sure, the building elements are all there, but your actions are often out of necessity to fulfil quests, and building takes place as a result of the narrative. Granted, the story never feels heavy-handed, but it provides enough focus and motivation to satisfy those who found Minecraft to be a little too open and aimless. The game features four distinct chapters, each offering numerous islands to explore and destroy in the quest for building materials. You do not carry over items between chapters, but the new elements that each chapter presents keeps the journey feeling fresh and exciting. Each chapter emphasises a new style of creations to build; in doing so, it lovingly highlights all that Dragon Quest is known for. 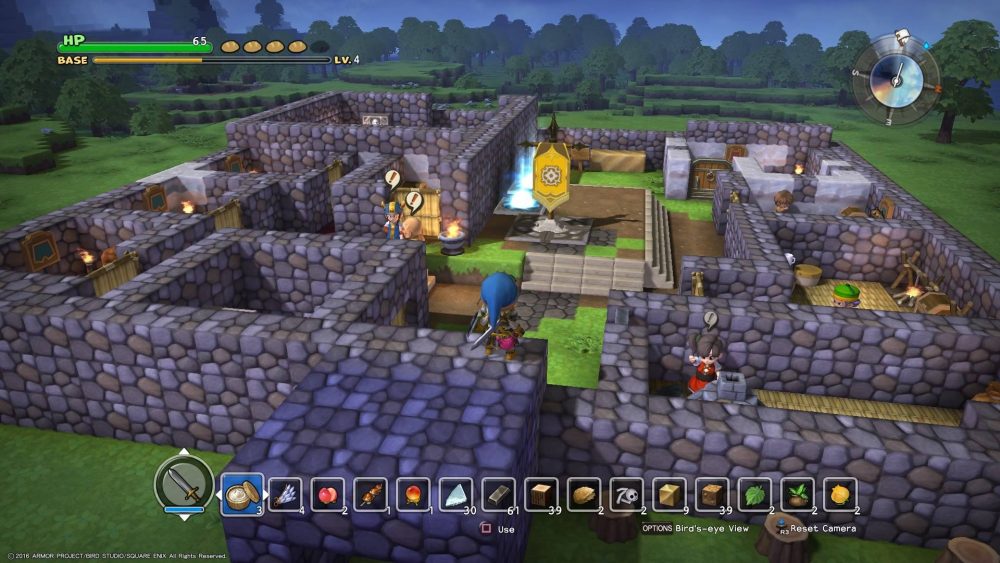 When it comes to gathering materials, a few improvements set this game ahead of the Minecraft formula. For starters, resource gathering is much faster and more enjoyable. Early on you acquire the ability to make hammers, which make quick work of most materials around you. Soon after, you can unleash a charge spin attack that destroys everything within a decently large radius. This serves as a useful trick in combat, and when paired with the hammer, it is an extremely efficient way of gathering materials. Massive storage chests – colossal coffers, to be specific – can be built to automatically transport and store items acquired when your inventory is full, so you never have to decide which item in your inventory should be tossed. Stored items can also be accessed from anywhere, making inventory management an absolute breeze.

While gathering materials, however, I did encounter one minor problem, specifically with the camera. The third-person view is largely beneficial, as it provides much more spatial awareness than what is possible in first-person. However, when navigating through caves or other narrow passageways, the camera zooms inward to compensate. There were moments where it zoomed in so much that it actually felt jarring. Occasionally, this results in mild disorientation or obstacles blocking your view. In some situations, a white outline helps mark your off-screen character to note your location, but getting stuck is still possible when the camera is unable to adapt properly. When the majority of the game takes place above ground, however, this is a minor grievance.

Another significant improvement is the ability to automatically learn new recipes relevant to materials you pick up for the first time. For example, obtaining your first chunk of copper teaches you the recipe for a copper ingot. Assembling your first copper ingot yields the recipe for a copper sword, and so on. Recipes appear in a list that you can access when using the appropriate creation tool, eliminating any guesswork or fiddling around with random items – you simply go to the list, choose what you want to make, and build it.

Combat, while simplistic, remains enjoyable as you battle against classic enemy staples from the series – look forward to seeing plenty of slimes, drackies, golems, and all the other familiar types. Dragon Quest Builders limits the player to three actions in battle – attacking, moving to dodge, and using items. Despite having a shield equipped, there is no way for the player to block attacks, and I often found myself wanting to do so. Builders’ lack of a level up system requires you to regularly upgrade your weapons and armour to face new, more powerful foes. The day and night cycle causes stronger and more aggressive monsters to target you at night, often motivating you to return to your village. Thankfully, consumable items allow you to fly back to your village on a whim, which is a welcome option in a pinch. 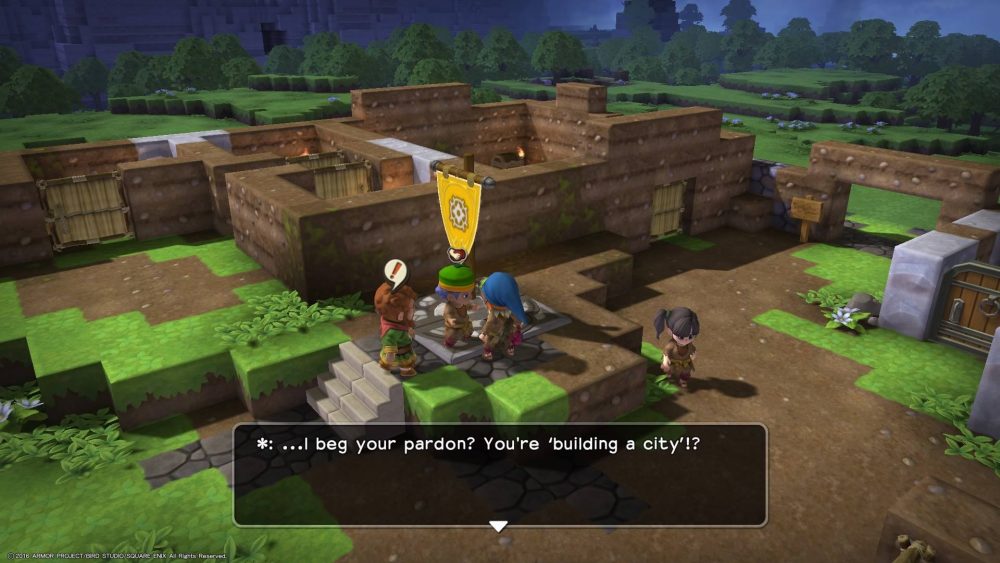 Completing the game’s first chapter unlocks Terra Incognita mode, where you can focus solely on building. Finishing more of the main story unlocks more content for this mode, serving as a nice reward system for your efforts. There are minor online components added in, allowing players to share their building masterpieces with one another. Unfortunately, there are no local or online cooperative modes, which feels like a missed opportunity.

The sounds and music in Dragon Quest Builders are a collection fueled by nostalgia, and that’s a very good thing; whether it’s the familiar chime for completing a quest or the whimsical casting noise from a chimera’s fireball attack, these sounds are instantly comforting to fans and pleasantly soothing for those unfamiliar with the series. Each song is appropriately charming for its locale or context, whether it’s a calming melody or an eerie nighttime track.

Dragon Quest Builders is both a fantastic game and a testament to the incredible versatility of the Dragon Quest series. It is a culmination of everything that the series is known and loved for, combined with the strongest elements of Minecraft. With solid gameplay, a gorgeous world, and genuinely funny writing, even those unfamiliar with the franchise can easily find something here to enjoy. Everything Dragon Quest Builders offers comes together beautifully to form a unique and immensely rewarding experience.

Dragon Quest Builders is available on PS4 and PS Vita. We reviewed the PS4 version.