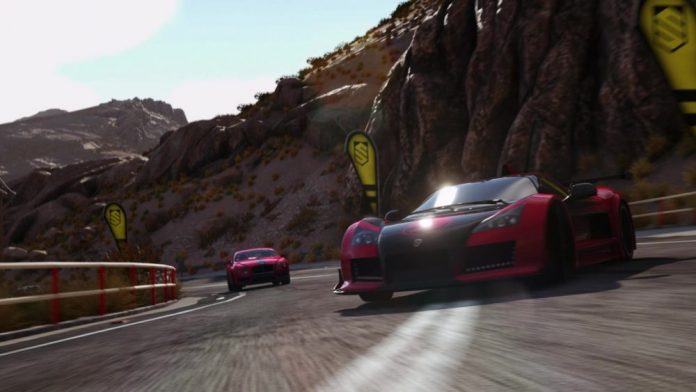 Sure, it got off to a rocky start thanks to some unfortunate and unforeseen server issues but the actual racing experience has been stellar from day one, and its season pass offers unrivalled value. A huge part of its appeal, however, is that it looks absolutely stunning, especially with the jaw dropping weather effects patched in after launch. Shoehorned onto PSVR then, with the visuals understandably dialled back, Driveclub VR still plays like a dream, but the added presence just doesn’t do enough to compensate for the drastic loss of visual fidelity.

Okay, it was obvious that Driveclub VR was never going to look as good as its non-VR predecessor, but it’s only when you sit down to have a decent play that you realise just how much it takes the shine off of things. The scenery is blurry, edges are pixellated, and everything just seems rather dull. Sure, it’s nice being able to look around your car and into corners, checking your mirrors realistically to keep tabs on the opposition, but it’s not enough to make you forget about the sacrifices that have been made for it to happen; goodbye photorealism and weather effects.

It doesn’t help that Driveclub VR is also prone to making you feel a little unwell at times. Obviously some will fare better than others, but as someone who has played their fair share of VR titles and come away mostly unscathed, Driveclub VR is certainly one to put on the queasy list. Initially it didn’t seem too bad, but after realising that assisted braking was on by default and turning it off, the increased pace and movement when cornering certainly had an adverse effect, and crashing or spinning the car really unsettled me. Still, I never got to the point where I was unable to play, and with the single player tour being about the same size as the original Driveclub’s, I’m sure I’ll keep delving into it until I’ve got all the stars from all the events.

Those who aren’t sickened by Driveclub VR or put off by its murky visuals will happily find that there’s more to do than simply play through its tour mode; all the modes and features of the original Driveclub make a welcome return. You can join and create clubs, set up your own events on the fantastic range of new tracks, take part in challenges, and of course, race online. This isn’t some cheap cut back cash-in, cobbled together to capitalise on the fact that there are no other racers currently available on PSVR; well, not totally anyway. This is a fully-featured release at an amicable price for those new to the series, and a bargain price for existing Driveclub season pass owners.

Those who have previously played Driveclub will no doubt get a kick out of trying Driveclub VR with its host of new tracks, but it’s unlikely to wow them as it feels just too familiar and too visually inferior to impress. Those who have somehow managed to avoid it for the last two years however, will undoubtedly find it much more satisfying. The handling still perfectly rides the fine line between arcade and simulation, allowing you to throw your car into corners but not too recklessly, there’s a nice range of event types that succeed in holding your interest, and the constant stream of challenges both on and off the track keep everything engaging. As far as the actual act of racing goes, it leaves little to be desired.

If you’ve picked up a PSVR headset and are desperate for a racing game to absorb yourself in, Driveclub VR will certainly do the job, but ask yourself one question first: do you really want to play an inferior version of a game just so that you can move your head around realistically in a world that seems like it has been smeared with Vaseline? If the answer is yes, then by all means pick up Driveclub VR and enjoy the solid driving experience it offers, warts and all. If the answer is no, however, stick to the original game, buy the season pass, and wait for another, more focussed VR racing game to enter the fray.

Driveclub VR is available on PlayStation 4.