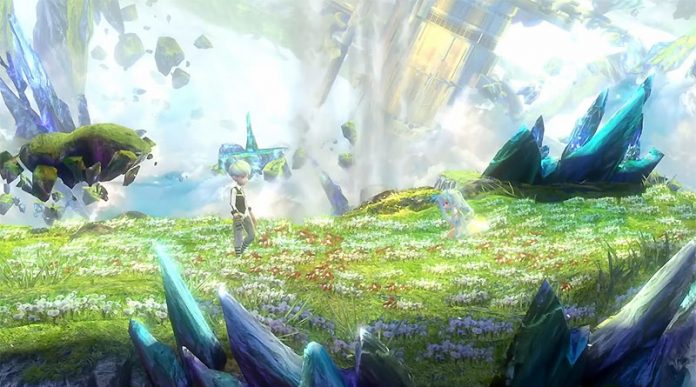 For many fans of the long dormant Valkyrie Profile series, the chance of Square Enix returning to the beloved game seemed slim.

Luckily, Spike Chunsoft and tri-Ace have teamed up to create a spiritual successor with Exist Archive: The Other Side of the Sky. Now that it’s finally come to the west, the only question is: does it stand up to its inspiration?

It’s true that many of the original staff returned to work on Exist Archive. However, it’s hard to notice the spiritual connections on the surface. With character designs from Mino Taro of Love Plus fame, we are introduced to our young cast of Japanese high school students, each with their own neon-lit color scheme, a far cry from the Nordic-themed warriors of Asgard in Valkyrie Profile. After dying in a violent explosion in the beginning of the game, their souls are transported to a mysterious planet known as Protolexa. There, they come to realise that an evil god known as Yamatoga had split his soul and placed it in each of the 12 characters. It’s not an exaggeration to say its plot is a bit convoluted and confusing, especially in the early moments of the game. The mysterious circumstances you find yourself in are explained via unknown terminology that make learning about Exist Archive‘s odd world all the more difficult.

While the characters and world of the game feel wholly detached from the game’s roots, once you’re over the initial shock of visual differences you’ll come to find Exist Archive is essentially a third Valkyrie Profile game in almost every possible way. The similarities between the two are endless, but one of the most immediate resemblances is the game’s fighting system. It quickly feels like a carbon copy of Valkyrie Profile‘s turn-based battle system, utilising the same features that made the more-than-a-decade-old JRPG so engaging and unique. Instead of manoeuvring some clunky menu system, robotically selecting spells and attacks to perform, party members are instead simply assigned to a face button. Turns are broken up via an attack and defence turn, forcing your party to work as a whole. Each character you control uses the same action gauge as well, making your party feel more like a single unit than a disparate group of assorted heroes. Where Exist Archive differs is in the subtle details, like how each character can bounce off of others, forming combos that flow together like they’re dancing in and out of combat. It makes battles feel fast, smooth, and easy to control in contrast. Not to mention the small references to other tri-Ace games, like a particular Resonance of Fate inspired character that made me giggle like an idiot. 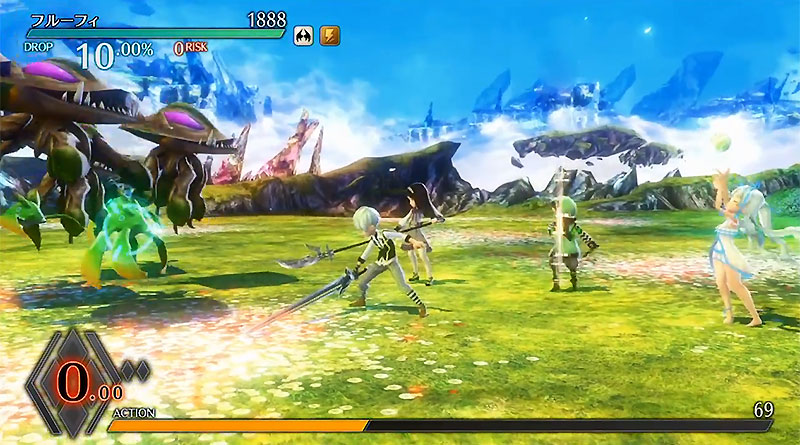 Traversing Exist Archive‘s world is relegated to walking on a beautifully realised side-scrolling 2D plane, again just like Valkyrie Profile. While it was commonplace in 2000, it feels outdated on a modern console, oftentimes becoming a confusing walk through separate instances and spaces. Alternate routes are restricted to moving through the background and foreground, often becoming difficult to remember where everything leads to and where anything goes. It discourages exploration, forcing you to stay focused on getting through each quest with what’s needed, lest you get lost in some of the sprawling and complicated landscapes of the game. While there are some small, platforming puzzles involved to give the game some variability, it feels like too little too late when you finally are making any headway into the game’s 40-hour story.

Available on both the PlayStation 4 and PS Vita, the Vita port is unfortunately plagued with issues. Slow load times, out of sync audio and framerate issues become a constant occurrence. While these are mostly small annoyances, they begin to feel a bit too regular as big story moments often take place with characters slowly getting through their large paragraphs of expository dialogue. While the quest structure works perfectly on a mobile device like the Vita, it’s disappointing to see this version work so poorly in comparison to its console counterpart.

The biggest problem Exist Archive has, however, is one of identity. Stuck between recreating Valkyrie Profile‘s admired systems in a brand new IP, it falls short of boldly identifying itself as anything unique. For any fan of the original, it might feel nostalgic to play a game so similar in its systems and theme. However, it does too little to evolve those systems after more than a decade of stagnation. Given tri-Ace’s recent track record, it feels like Exist Archive is a continuation of the mediocre quality coming from what seems to be an under-funded studio. It’s story is ultimately disappointing, even with the intriguing questions the beginning of the game proposes. Despite its multiple endings, there isn’t much replayability value here. Characters mostly fall into annoyingly stereotypical anime tropes, making it hard to get invested in any of the relationships that prop up in the story. It’s a game that, on the whole, mostly feels like a trial of rinse-and-repeat.

Despite it all, however, Exist Archive: The Other Side of the Sky still manages to be a fantastically fun JRPG. With the genre’s trademark capacity for melodrama and overemotional set pieces is all over it, the game stands as a testament to a genre in the middle of a comeback. A series that was previously in cryostasis has been revived and makes Exist Archive all the more enjoyable, knowing it is recreating an experience many fans thought they’d never see again. Even with its inability to evolve or innovate further, there’s still a fun, capital J-RPG to be found here for those who want it. Heavy grinding be damned. For that, it’s at least worth a look.

Exist Archive: The Other Side of the Sky is available on PS4 and PS Vita. We reviewed the PS Vita version.