Sir Alex Ferguson famously had a pre-match team talk versus Spurs in which he rallied his boys by uttering: “Lads, it’s Tottenham”. Any seasoned FIFA player will feel that same sense of dutiful expectation heading into EA’s newest installment to the cherished football sim.

As is customary with modern technology companies, EA has pulled out all the minor incremental stops in the creation of FIFA 17. These games have always made for a bit of a frustrating experience, as the improvements year-to-year are always so minuscule. This was a bit more evident in the last installation, which the marketing team straight-facedly touted improved goalkeeper behaviour and women’s teams as the big purchase-worthy innovations. To be fair, the women’s squads were a master stroke in being an unassailable “big update”, but functionally speaking, FIFA 16 made glacial progress. The most vexing part is that the marketing magnates at EA know they can get away with it, despite the many who have been touting the mechanical superiority of the Pro Evolution Soccer series for some time now, the firm licensing strangleholds by the lovely corporate slimes at EA has thus far managed to hamstring the apparently superior game. It’s a bit ridiculous that the game which has been reviewed better for the last few years and is generally agreed to be the mechanically and graphically superior entry (vs. FIFA’s eye-roll worthy distinction as “atmospherically superior”), the FIFA brand seems too established to shake in the foreseeable future. Yet here I am, year after year, buying into it, so I guess I’m part of the problem.

In all fairness, the conglomerated work from past titles which have congealed into this newest installment is a fairly comprehensive package for a football game. All the modes you know and perhaps love are back, from basic kick-off, both manager and player careers, to seasons, to the cash printing machine within the machine that is card-based Ultimate team; everything is back in an essentially unaltered state. You have to hand it to them, EA has created a fairly comprehensive platform even for those looking to indulge in something beyond football gameplay. It remains to be seen what exactly is left to tweak the formula further, but in comparison to last year, there seems to be at least a bit more ambition.

This manifests itself mostly in the newest game mode and the biggest non-ridiculous advertisable update to the series in a while: The Journey. While the Journey is not the most innovative or well-executed idea ever implemented in a game, I think it’s a solid step in the right direction as well as a nice sign that someone on the FIFA team is interested in adding more than a medium sized patch worth of material. The Journey has you filling the shoes of Alex Hunter, tracing his path from youth trials to the heights of the Premier League. Predictably, the story is filled with ham-fisted emotion, cliche caricatures and predictable narrative but it’s never bad enough to really be offensive. It’s the tentative step you would expect from a “risky move” out of EA and hits all the beats one would expect: it’s quite thin on features and won’t be the time sink of something like Ultimate Team. Essentially, it’s a player career with a more focused narrative path and honestly, it was a nice diversion and got me to give a toss about trying a player career. 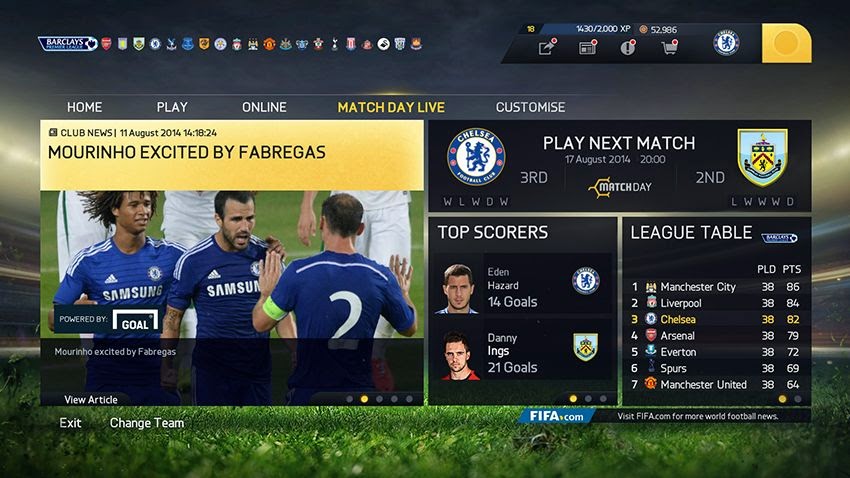 Starting amongst a smattering of academy players at their trials, you have to “earn” a top spot ahead of the other youngsters to earn a contract with a Premier League side by completing some of the training drills. Sadly, for those of you looking to scrape food money together in the 5th tier of semi-professional leagues before retiring to a hasbeen life in a pub somewhere, you unfortunately can’t. In fact, you really don’t have a choice to succeed or fail: not doing well enough at any critical stage of the story merely boots you back to try again, so your destiny is pre-scripted stardom and there are really no stakes to care about. You can also only play one of three offensive positions (striker, wing, central attacking mid) but the team I chose ended up just playing my Alex wherever needed, so your preferred position is also irrelevant. Eventually your shiesty agent lets you sign among literally any team from the Premier League and you work your way through the initial phase coming on as a sub, go through a brief loan spell before your team realizes what a mistake it was to let you go and recall you even if you don’t manage to do anything. Depending on how good the team you chose is, you’ll need to bag a varying amount of assists/goals as a sub and do well in training drills to attract the spotlight. Don’t worry, without fail, before you know it, you’ll be awarded in awkward cameo appearances from some of the world’s second/third-best tier of players.

As you may have surmised, there are some definitive issues with The Journey. Besides the quirks listed above, playing from a player perspective can be pretty boring (I figured I’d get the authentic experience). Granted, getting early playtime as the lone striker in the barren Bournemouth team is likely not overly exciting in real life, but I found that an inordinate number of my games ended in a frustrating 0-0. I concluded you can’t really trust your team to do anything worthwhile, so I found myself running around like a madman into weird positions, constantly raising my arm to request the ball like an impatient restaurant patron. Ultimately, your success rate whether you roll some pretty loaded dice by creating chances for your team, or by taking on the whole defense by yourself, is startlingly low. I fancy myself quite good at the game, but even my prodigious talents still managed three or more games of frustrated droughts. Realistic maybe, but there’s not much incentive to saddle up again when chances are you’ll feel like you’ve wasted your time.

Given that you can choose any Premier League side, it would be inhibitive to have interaction with actual players or managers on the team, so the game has to plant predetermined players and coaches whichever team you choose so any notion of hitting the club with Jamie Vardy or what have you is also sadly unattainable. Instead, you’re left interacting with the lame fixtures who have mysteriously appeared on your team of choice. You’re also presented with hideously contrived appearances from the likes of Angel Di Maria or Marco Reus, who pop in for brief, laughably awkward cameos. Harry Kane and his silly lisp also occupy a prominent role as he will sign for whatever team you’re on, but as the first choice Bournemouth striker in a one striker formation, not only was it pretty implausible for him to be there, he didn’t really play. I think the few choices you are afforded are not only largely irrelevant, but force a generic narrative. There’s no replayability at all, and while this would be remedied somewhat by just choosing a team for you so you can actually get a feel for real players and the club instead of copy pasted elements or have real consequences/rewards/choices, but I’m sure there would be quite a tussle over the details.

All my crotchety grumbling aside, I do appreciate the attempt at something somewhat original in a franchise which is firmly entrenched in minuscule improvements. Despite some less than glamorous features of the mode, I think it’s a solid foundation for the FIFA guys to incrementally improve for years to come. With a little cleaning up, more focus on telling either a free-flowing and consequential or a narrow but engrossing narrative, putting a little more than in than just the same old training drills/game routine – and dare I say VR integration, The Journey could be a major component in a generation of FIFA games to come. While this is all extremely wishful thinking for the short term, in the distant future I would not at all be surprised to see The Journey as the defining component of not just FIFA but many other EA sport titles as well. 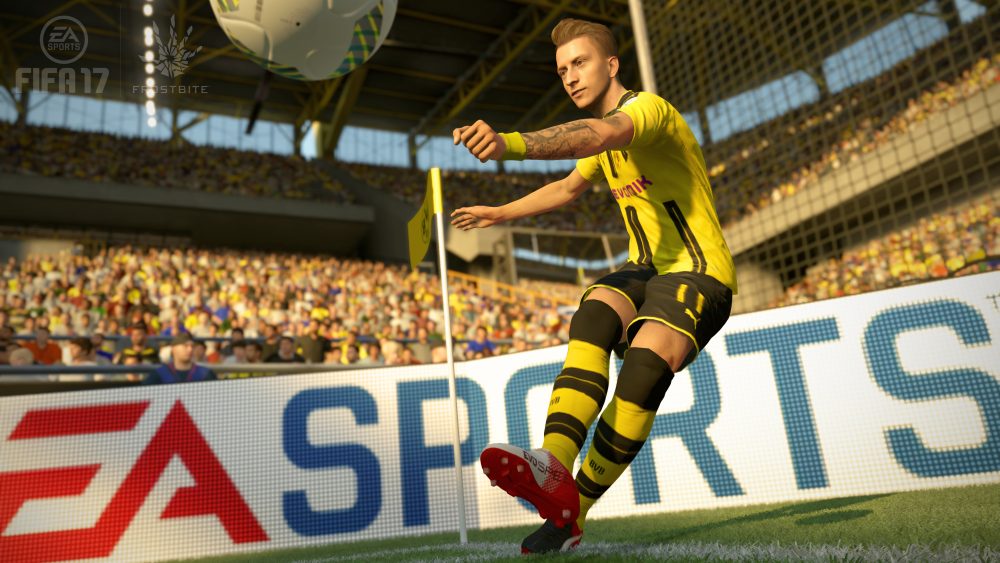 In terms of the rest of the game, even casual FIFA players can pick up right where they left off; I noticed only minute differences in gameplay. Dribbling in 1v1 situations seems a bit easier, shielding the ball with your back to the defender is far more effective, and timing/angles for shots are a bit different. Passing is a bit more realistic (read as: slower and less accurate) which some may dislike, especially during online play, but the game in general feels a bit more like a real game. Some features have also been well updated. The soundtrack is solid, if a tad bit less memorable/risky than in the past, but it’s leaps and bounds ahead of PES, which still doesn’t attempt to incorporate anything in the tracklist which isn’t fit for a toy store. Utilising the new Frostbite engine, the graphics, especially for close-ups for star players and notable managers, are a good bit better than last year, although from the top down perspective, the game doesn’t look a ton different.

This is an EA Sports game however, so as expected, there are still plenty of annoying or stale elements that carry over from the last game which were not given any credible attention. As expected at this point, the commentary is pretty much exactly the same as last year. And the year before that. And the year before that. I am so traumatised by the recycled lines from Martin Tyler and Alan Smith, I can literally quote lines for each situation. I get that they’re iconic, but it seems the developers are content with a full decade of a few extra lines a year. The AI has made some strides forward on defense and are generally less reliant on the near unstoppable goals that I’m usually subjected to (corners, one touch distance shots, double/triple deflections etc.). However, they haven’t really replaced them with anything so even on Legendary difficulty, the computer is pretty clueless in the attacking third. I’ve been averaging about one on target shot on my goal per game, and with a better team like my Liverpool squad, I wasn’t scored on in strings of seven or more games. These breaks usually occur due to lapses in defenders, as they have a bad habits like running away from crossed balls or freezing in place when not being directly supervised.

What do you expect though? The Journey was the biggest move in the FIFA franchise for years and expecting more than a new mode is wishful. The fact remains that FIFA will continue to sell ridiculous numbers of copies with nothing more than updated rosters and stats. So having something, even a short-winded and underdeveloped new campaign mode, is somewhat worthy of praise. Truthfully, FIFA 17, to me, is one of the stronger entries in the last few years from the EA Sports guys and it’s a pretty great game if you’re relatively new to proceedings. It’s just difficult for ragged veterans such as myself to wholeheartedly endorse a game which has been so formulaic for so many years. Somehow I always hold out a tiny shred of hope for something different, and it’s that shred which stings me every single year. All we can reasonably do is pray for more than miniscule hops forward, such as an improved Journey, to punctuate another year of football flavoured slavery we’ve resigned ourselves to.

Fifa 17 is available on PC, PS4 and Xbox One. We reviewed the PC version.