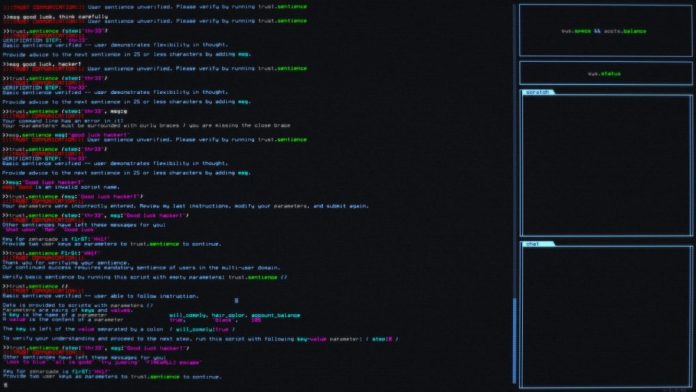 In between the paranoid fever dream of Mr Robot and the myriad of indie games attempting to recreate the fascinating sub culture, along with all that real-world stuff of whistle blowers and Edward Snowden and privacy debates, the dystopia written at the birth of the Internet seems to be slowly coming to life. As a society we lurch closer to living in a dystopian cyberpunk story ourselves and it seems that more and more we should be just as worried about protecting ourselves online as we should in the real world. So, good thing, then, that we have video games to help us escape that very real hell and sweep us away to… oh, wait. Hang on a minute. This is a review of hackmud, the grimly paranoid hacker simulation from one-man-band Sean Gubelman of Drizzly Bear studios, and it’s as real, as dark and as mysterious as you’d expect.

hackmud is a thrilling game of intrigue, mystery, darkness and computer espionage told entirely from a text-based UI. There are absolutely no 3D graphics or visuals to speak of; the game completely carries itself on text prompt design. Right off the bat this stark design choice will turn a lot of people off; some people will see a wall of text and will completely glaze over, and some people will note that you have to hammer in text script to do anything in game and groan in disbelief. People will realise that the game has a four-hour tutorial to teach you just the basics, before hitting the main game and seeing that the basics are really nothing at all. This is hardcore game design. It’s oppressive and individualistic to a strong degree and in that uncompromising vision lays a true cult hit: a game that won’t win the hearts and minds of the masses at large, but its niche design will attract a select few into its folds like a beacon in the desert, and playing hackmud is unlike anything I’ve ever experienced.

hackmud begins life as a four-hour tutorial (which took me six hours to finish because I’m stupid) where you’re taught the very basics of the game’s script-based command system. This is wrapped up in a story at the same time, as you find yourselves chatting to some discarded AIs that are trapped in something called the “vlan”. Escaping the vlan is where the game properly begins, but simply learning the basics of the game’s sinewy script-based tendrils is challenging enough. If you’ve had no prior scripting or programming knowledge like myself you’ll struggle: this game certainly doesn’t pull punches, choosing to combine tutorials of its various scripts with riddles and mysterious questions that you simply have to learn to figure out. hackmud primes you for this by giving you a sentience test to start out with where you have to solve some basic logic puzzles, and even in this basic form it primes you for having to both figure out how the scripts work and doing so in riddle form.

It’s certainly unconventional, but by the end of it I felt comfortable running the scripts I’d been taught and I believe I was ready to tackle the game properly. It does all this while subtly alluding to the fate of the earth outside the vlan, outside of the Internet. Nondescript mentions of a flu or a virus that wiped people out and that this vlan is one of many pieces of technology left behind on a dead planet – the idea that all these sentient AIs are running around on a closed network chattering and scripting away felt truly post-apocalyptic in a very literary sense. The setting for all of this is incredible, all told through text. That’s one hell of an achievement. 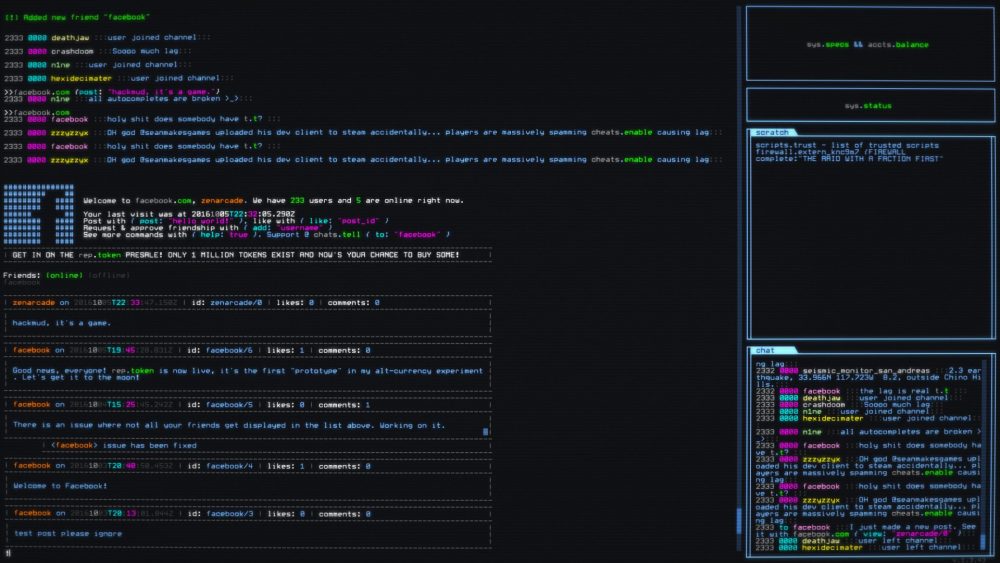 After braving the gruelling tutorial and escaping the confines of the vlan, you’re then dumped out into the wlan, which is the MMO portion of the game. Getting to this point is a little bit like staring into the deep, dark depths of a bottomless ocean. The possibilities open up and you realise all the skills you learned during the tutorial are so insignificant that it’s almost off-putting. Luckily though, the lure of possibilities is strong enough to bring you back. The scripting knowledge you learn in the tutorial can be used to run programs made by other players; you can hack NPCs to get some cash back, then use the cash to buy upgrades and better scripts. You can, if it interests you, use your scripts on other players, to both help and damage them. The first thing you’ll notice about the wlan is that even a week after launch there’s already automated chat bots designed by other players to get you to run scripts that will transfer all your cash to an anonymous source and the main chat channel of hackmud (called 0000) is a scrolling surge of human and not-so-human activity. Working out the real from the fake, the safe from the damaging is all just part of the game’s mystique, and the game is almost entirely player driven; nearly everything has been built by other players save NPCs and story elements – try it yourself. Visit 0000. They have Facebook.

hackmud is a complete mood piece. Making full use of your keyboard is perhaps the most immersive use of a PC control scheme since Duskers, and the endless scroll of mysterious Internet murmurs in the open world by other players really adds a thousand layers of depth to what could have been another hacking simulation. The depths go so deep, in fact, that there’s a whole other layer to the game that I will likely never be able to see because I’m just not very good at scripting. The architect stuff in hackmud is the stuff of dreams for players who are more talented than myself: it allows you to create and write all of your own scripts and programs inside the game, be it for nefarious means or not, and the many talented inhabitants of the wlan have taken this and ran with it, too, having made text adventures, social media recreations, chat bots and credit transfer hacks for inexperienced players to fall into.

Music, too, is an absolute delight, reminding me of the best tracks from the Alexander Brandon soundtrack to Deus Ex all the way back in 2001: atmospheric midi tracks map out a mysterious world in aural tones, invoking mystery and intrigue during the downtime lurking in all of hackmud‘s dark, murky chat channels, then kicking into action, too, when you initiate a kernel:hardline.

Undoubtedly, the uncompromising nature of hackmud will turn a lot of people off. I wouldn’t just advise going in with an open mind, but some knowledge of programming, too, would really help. I had only one out of those and I do wish I’d known something about coding beforehand as the tutorial alone took an inordinate amount of time to overcome, as I was simply unprepared. This is Dark Souls territory, here. It drops you in and tells you the basic script commands but it’s up to you to fail (and fail you will) before learning how to use them effectively. But allow yourself to be immersed in this game: hackmud is the most original use of your keyboard in years, and its commitment to its own atmosphere is devilishly admirable. This is the closest you’ll get to feeling like a hacker without being one yourself and a strong launch on Steam has entrenched a small but dedicated fan base of players ranging from broken, digital villains and charming rogues, to the casual bystander willing to take you under their wing and lend you a hand, all contributing themselves to the amazing world of hackmud. This is indie gaming at its most ideal: uncompromising, daring and utterly irresistible.

hackmud is available on PC.