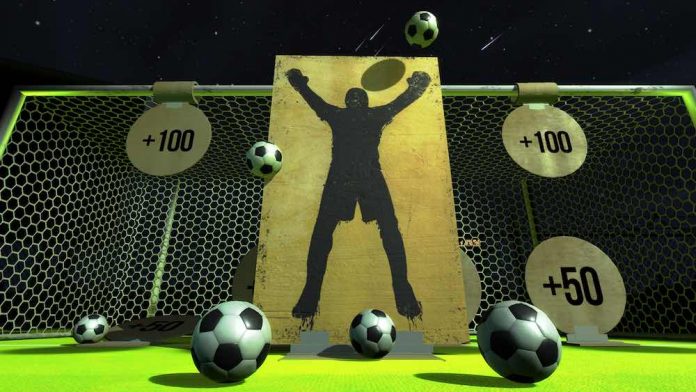 Being a wearer of glasses, I’ve always been reticent about heading a football.

If not only because they are bloody expensive to replace should I get the timing/position just that bit wrong, but also because it would hurt too, probably quite a lot. Thanks to Frame Interactive’s Headmaster for PlayStation VR however, I no longer need to miss out on the joy of displacing the journey of a ball through the air via my noggin. In fact, I can do it from the comfort of my armchair without the fear of any damage/injury whatsoever. Back of the net!

As player number 3274, newly enrolled at the Football Improvement Centre Heading Facility, Headmaster tasks you with making your way through over 30 lessons in which the answer is literally your head. That’s right, with no controller required beyond loading up the game and choosing between the single player story mode and a multiplayer group session, all you have to do to succeed is demonstrate expert control of your bonce. Surely everyone can do that without even trying, right? Well, actually, it’s not as easy as it sounds.

Whilst Headmaster‘s premise is simple – head the footballs that are propelled at you to hit various targets and achieve a score that will allow you to proceed to the next lesson – doing it accurately and reliably is extremely challenging indeed. Up to three stars can be obtained in each and every lesson depending on the score achieved, and whilst the difficulty of the first slew could be considered fairly breezy, it soon ramps up, and some players will find that progression perhaps relies on a great deal of luck as much as it does skill.

Initially, lessons are simply a case of putting the balls comfortably in the back of the net whilst hitting the odd target or two which award more points, but they quickly become much more testing. Obstacles such as goalies on rails are introduced that move to deflect your shots, targets are increasingly placed outside of the goal area which prove to be much harder to hit, and you’re occasionally tasked with more left-field aims such as destroying pinãtas to score points. 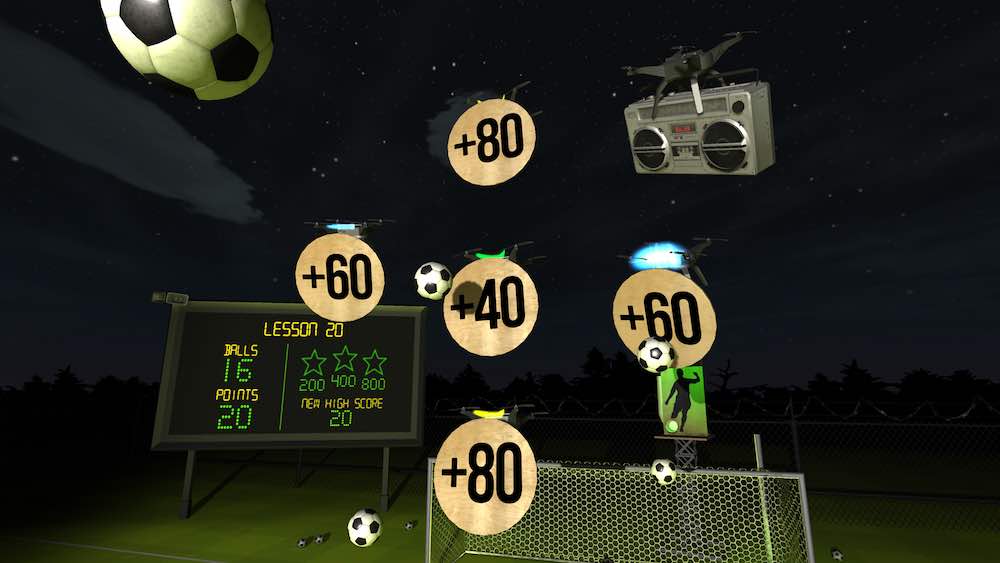 You can make things a little easier at times by hitting a bonus ball target, sending forth numerous balls that either explode, grant double points or split into multiple smaller balls for mass coverage, but they never make a lesson trivial. It all makes for a game that is enjoyably varied despite its simple controls and narrow scope, but your progress can easily be halted by a lesson that seemingly requires a level of accuracy that is hard to reliably achieve. And it’s nothing to do with the PSVR’s head tracking capability, which in this instance is flawless.

Of course, through continuous play and bundles of patience almost any lesson can be overcome eventually, but it’s Headmaster‘s quartet of exams that will really have you cursing into your VR headset whilst possibly putting an end to your heady exploits. Requiring a set number of stars to be obtained before becoming available, exams act as gates to yet more challenging lessons, but passing them will require every shred of skill you have and perhaps also an obscene amount of luck and persistence. Playing out pretty much the same as lessons but with harder to reach targets, more ridiculous obstructions and ludicrous score requirements, they will undoubtedly prevent many players from accessing everything that is on offer.

Despite Headmaster‘s often crushing difficulty though, it’s hard to think ill of it. Sure, It’ll drive you mad when you’re retrying a level you’ve been stuck on for what seems like an age for the 100th time, but you’ll always go back for more. Why? Because no matter whether you’re a football fan or not, Headmaster‘s original gameplay is simple yet utterly addictive, and no minor frustrations can do much to take the shine off of it. It also helps that gameplay is encapsulated in a comical story that gives you the urge to progress if only to discover the fate of your player. That’s quite an achievement for a game in which all you have to do is head footballs.

If you’ve bought yourself a PlayStation VR headset and are after a charming title that anyone can have a laugh playing or watching, Headmaster should be up high on your list. It’s the perfect example of how the format opens up new gameplay opportunities, and is sure to provide you with hours of fun and plenty of challenge.

Headmaster is available on PlayStation 4.