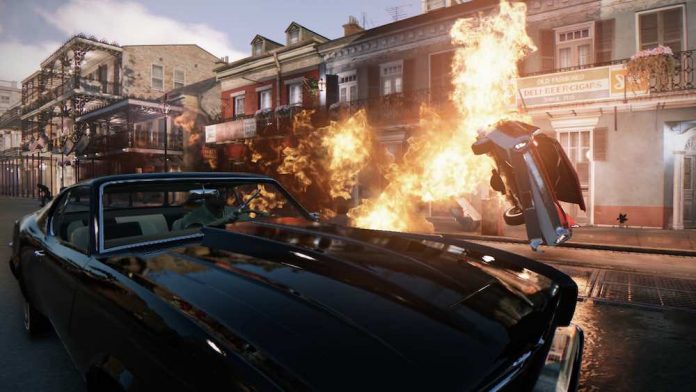 “Those that ignore history are doomed to repeat it.”

This saying played over and over again in my head during my time with Hanger 13’s Mafia III. I admittedly gave up playing Mafia II because I found the act of repeatedly driving to and from story missions with nothing else to do in the open world ultimately boring. It felt like a half-baked idea turned into busywork and turned me off from the game entirely. Over six years have passed since Mafia II and while Hanger 13 has learned some lessons, added some interesting new ideas and tell a compelling story, archaic design decisions and a severe lack of polish keep Mafia III from being a must-play experience.

Set in New Orleans-inspired New Bordeaux in 1968, Mafia III tells the story of Lincoln Clay. Clay is a Vietnam veteran who’s returned home and is helping his surrogate family of black mobsters as they struggle to pay off a debt owed to Sal Marcano, Don of the Marcano crime family; a debt incurred by a turf war with the Haitian mob. A betrayal leaves Lincoln for dead and he spends the rest of the narrative working with the other mob gangs to get revenge on the ones that killed his friends and family. It’s boilerplate stuff, for sure, but the performances and writing are top notch and elevates the material far above its generic leanings. Racial tensions, the Vietnam war and 1968 Americana help flesh out the world and the narrative, making it rich and detailed. It’s also framed with faux documentary footage with interviews conducted with characters from Lincoln Clay’s life, a prosecutor and a senate trial that really give the entire game a unique feeling.

Completing the narrative requires working with three underbosses who are each well-realised characters in their own right, earning their trust, and eventually having to make a tough choice of who to betray and murder or keep alive. The more time you spend with these characters, the harder it becomes to make these choices.

Story missions offer the most variety in terms of structure, from rigging up a bridge to explode, going under cover in an underground fighting ring, freeing strung out girls from a brothel, and so on. Unfortunately, however, they don’t make up the bulk of the gameplay that pulls you through the strong narrative.

While the narrative truly is the strongest aspect of playing Mafia III, driving around New Bordeaux unfortunately became such a chore for me that I stopped visiting the supporting cast unless it was absolutely necessary for gameplay reasons to move the critical path forward. It’s a shame too since the driving isn’t bad at all, and there are neat ideas added to make it more interesting such as how little direction signs pop up at intersections telling you which direction to head and having someone drop off better, faster cars to make the long trips more expeditious. The real problem is that there really isn’t anything to do when you’re driving except drive and occasionally stop off to snatch up a collectable. There are no side missions that you can happen upon, no mini-games to partake in, and no real ambient mission design that has become a staple of open world games since Mafia II released. You simply drive to the mission you’ve selected, talk to someone, select the next side mission that feeds into the main mission and so on. 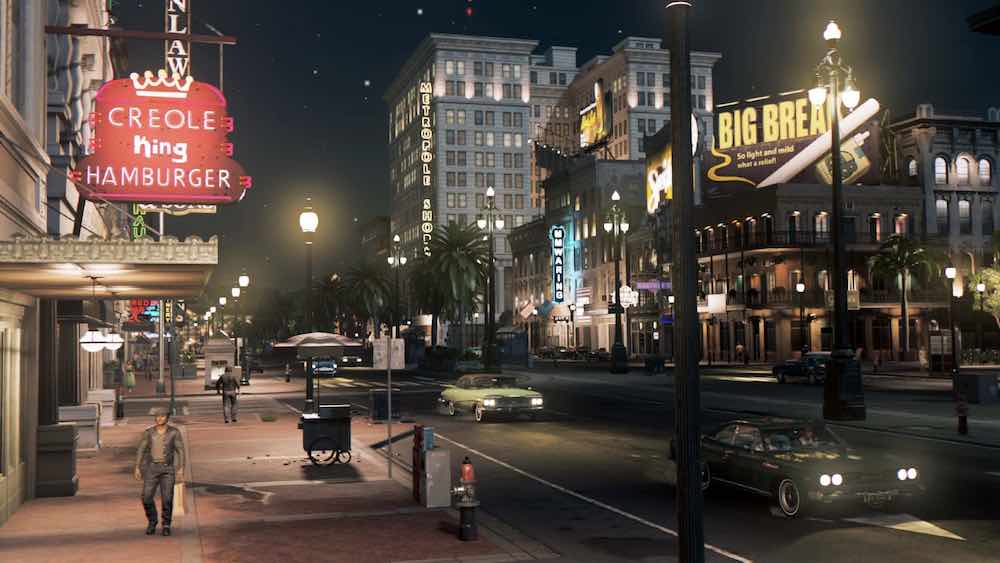 The basic gameplay loop of Mafia III is satisfying enough at first. You find out about two rackets going on in the area and then proceed to damage them by costing them enough money that it brings out the goons that run the respective racket, kill them and then assign the racket to an underboss. Doing this will increase the money that underboss makes (their “earn”) and unlocks certain gameplay perks such as access to more weapons, a concierge that will deposit money for you, a mobile supplier that will drive to wherever you are and sell you ammo, guns, health items and character upgrades. Each boss has a perk path and, depending on how you wish to play, some may be more worthwhile than others. For example, most of underboss Burke’s perks keep the police at bay while Vitos’ perks offer health bars, back up for action sequences, and the aforementioned concierge. It didn’t take me very long to realise that Vito’s path was much more useful than Burke’s as the police didn’t ever really pose much of a threat or obstacle.

Once you’ve completed taking over the rackets you go after the district boss, kill him and then assign the entire district to one of your underbosses. Doing this increases their “earn” and makes them more loyal to you. It’s easy to mess this up at least once if you’re trying to be “fair” in dividing up the rackets as evenly as possible, because during the “sit downs” – sections of the game where you meet with your underbosses to assign them the district – you may take money away from one of them because you assigned them a racket in a district you want to give to another underboss, thus removing them from the racket. This will cost you whatever perk you earned from that money tier so make this decision wisely. You also have to remember which rackets you’ve assigned because you can’t back out and look at the map to see who has what.

Taking out the rackets makes up the bulk of the goals in the game and doing so is fun, for a while. You can go in guns blazing or use stealth, with stealth being the much more satisfying of the options. You can lure or sneak up on enemies and take them out silently, one by one, until the final target is left. Once you reach them you can either fight them in a subpar mini-game or simply shoot them in the face enough to drop them to one knee, approach them, put a knife to their throat and kill them once and for all. The more perks you get, the easier and quicker this becomes until you can pretty much blow through everyone, kill the main “boss” and then move on. Thankfully the cover and shooting mechanics are solid so it makes taking out the dumb AI a little more pleasing.

Here is where the design cracks start to show. While some of the rackets vary, how you approach and do the damage you need to do rarely does. Eventually it becomes a repetitive exercise of going through the motions.  Even the animation for the racket bosses are identical; only the words Lincoln exchanges with them changes.  What’s worse is that the game makes you revisit a place you’ve already cleared out to confront the racket leader.  And that’s pretty much it. That’s the gameplay loop that you’ll do for ten districts until you complete the story. The underboss missions change things up a bit with a cutscene but getting there only changes based on how you approach it – and even that is limited to your arsenal.

There are some other side missions you can do to help increase the respective underboss’ earn but they usually involve entirely too much driving in vehicles that aren’t much fun to drive. This wouldn’t be so bad if the game didn’t have one of the most glaring omissions one can have in an open world game; no fast travel. None. Nada. Zip. If you want to get somewhere, you’re driving there. I generally don’t like to fault a game based on what other games have, but for me, fast travel is key to enjoying an open world game. Especially if you don’t include a truly fun way to get around the world; be it super powers, planes, or even motorcycles. Why on earth are there no motorcycles in this game? 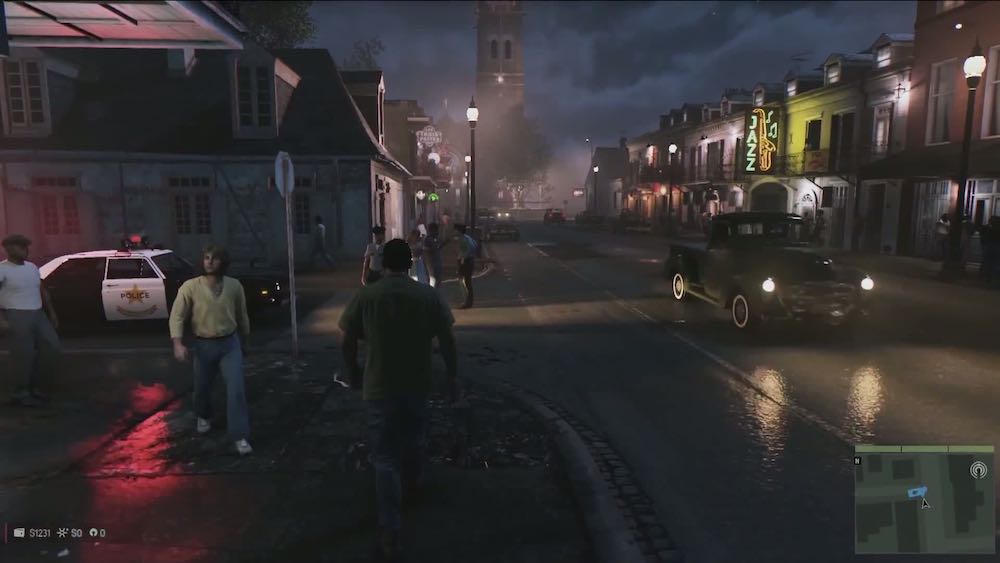 Technically, Mafia III is kind of a mess. Immense pop-in the likes of which I’ve never seen plagues the game; so much so that I took a step towards a house and a camper literally popped up in front of me out of thin air. Cars appeared in intersections I was speeding through, and enemies disappeared from behind cover. The lighting is all over the place, sometimes being flat or even hued green for no good reason. It’s clear this game needed more polish.

If there is one technical aspect of this game I can truly praise however, it’s the sound design. Everything here is top shelf and seems to have gotten the most attention. The voice acting is fantastic across the board; even lesser characters are believable in their brief appearances. The sounds of the city and the bayou are all authentic or at least sound authentic, creating a real sense of place. For me, though, the standout is the soundtrack. There are so many fantastic, classic, period appropriate songs like “Fortunate Son” by CCR, “Paint it Black” by the Rolling Stones, “A Little Less Conversation” by Elvis, “White Rabbit” by Jefferson Airplane (a personal favorite of mine) and more. If you’re not into rock and roll or true rhythm and blues then you’re probably not going to enjoy it as much as I did, but I loved and adored this soundtrack.

I would be remiss if I didn’t mention the neat, superfluous touch in terms of the collectables in this game, but you can collect Playboys from the 60s and each one features at least one authentic nude shot of a woman and some even feature entire articles from the respective issues. You can also collect Hot Rod magazines, records and nude paintings. It’s a neat, but ultimately meaningless touch that helps make the driving a little less tedious, but your mileage may vary. Pun very much intended.

I wanted very much to enjoy Mafia III more than I did. The story really is great, the shooting feels good, and getting more and more powerful is rewarding. Unfortunately though, Mafia III is plagued with head-scratching design decisions like having no fast travel options, a repetitive missions structure and very little to do in the world that doesn’t involve killing bad guys. Compounded by the litany of technical issues, Mafia III seems like a game that could have used a lot more time in development but man, that soundtrack really is stellar.

Mafia III is avialable on PC, PS4 and Xbox One. We reviewed the Xbox One version. 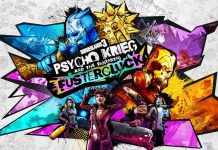