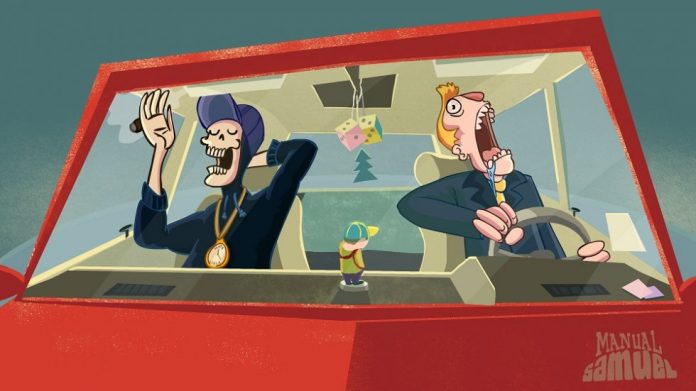 A hapless oaf of a man, born with a silver spoon in his mouth.

The hippest depiction of Death you’ve ever seen, with a life goal of actually pulling off a kick flip. Robots given unnatural life before it is once again taken from them. A rather cool Satan who has way more patience than you’d give him credit for. No, these aren’t the just the random things that occupy my mind; well, at least not on a daily basis anyway. They are, in fact, just a handful of the many ingredients put into Manual Samuel, a unique and rather fantastic game developed by 2D revivalists Perfectly Paranormal from Norway.

Comedy is a hard thing to pull off in the world of video games. Many have tried, and whilst one or two have hit the mark and truly made me chuckle such as the excellent Bulletstorm, none have exuded quite the amount of humour exhibited by Manual Samuel. Putting you in control of the titular Samuel, a privileged and selfish gent who meets a comical and untimely demise after a quarrel with his girlfriend, Manual Samuel manages to tickle your funny bone from beginning to end with ease. What’s more, it’s not simply because of its combination of exceptional writing and humorously animated 2D graphics, but also because of its utterly unique and amusingly entertaining gameplay too.

You see, finding himself in Hell for being a bit of an arsehole, Samuel is a silly boy and makes a deal with Death for the chance to once again have a go at living. The condition: he has to make it through an entire day with whatever handicap Death bestows upon him without dying, again. In Samuel’s case, he loses the ability to do normal day-to-day tasks like breathing, blinking and walking without so much as a second thought; even standing up straight becomes a challenge for him. With you having to control his bodily functions manually then, hilarity ensues, and even though it could be said that the gameplay veers close to becoming unduly frustrating on one particular occasion, it does little to sour the experience on the whole. 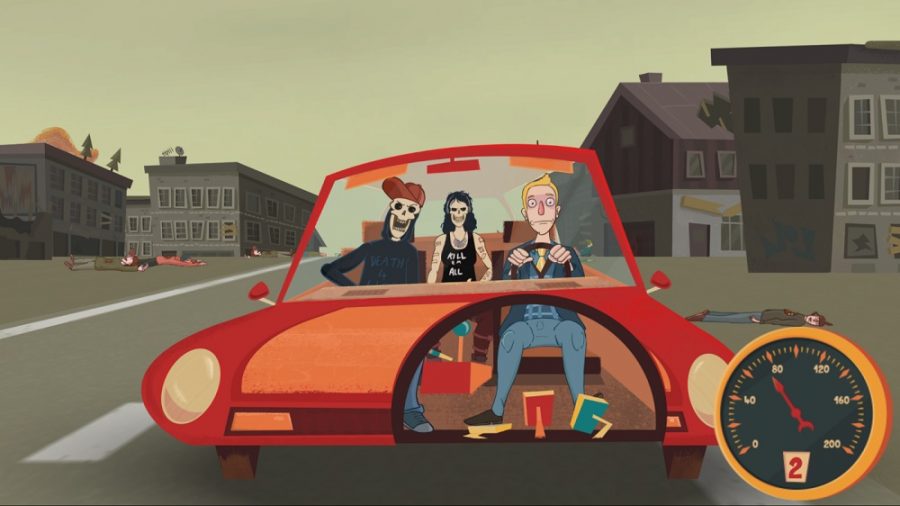 With a story that will take you around just two hours to complete on your first play through, Manual Samuel is a true test of your hand-to-eye coordination and finger dexterity. Your controller’s triggers each control a leg, requiring you to alternate between them fluently to maintain a steady pace, the A button makes Samuel blink, clearing his blurred vision, and the X and B buttons inhale and exhale air respectively, allowing Samuel to breathe. There are other commands too, many of which are contextual, but you get the gist: Manual Samuel asks you do the mundane, but in doing so it makes it funny, challenging and engaging.

Even when you’re messing up in Manual Samuel you often feel rewarded for doing so, if not via an amusing animation or unexpected outcome, then perhaps by the comments of the witty narrator that feels like an omnipotent friend throughout your adventure. Fluff up walking, for example, and you’ll drop to the ground, legs awkwardly spread at 180 degrees. Forget to breathe and Samuel’s face will gradually turn blue, until he eventually passes out due to a lack of oxygen. “Breathe, Samuel, Breathe!” the narrator will proclaim, like a parent that’s equally dismayed by and sorry for their offspring, and after regaining control of your bodily functions you’ll be back on your way like nothing ever happened.

Whilst there’s no particular fail state in Manual Samuel, there are some areas where performing poorly will set you back a short while. This can admittedly become a little tiresome when you’re really struggling to overcome a more arduous challenge, such as a boss, but those with ample dexterity, or at least patience, won’t find it much of a hindrance. Besides, with its short running time and excellent pacing, even taking the minor hold-ups into consideration it still surmises into a concise game that knows when and how to engage and disengage a player to avoid outstaying its welcome.

Those that do like to get more bang for their buck, however, will be happy to hear that Manual Samuel comprises of more than just a simple two hour story mode, with both time attack and co-op modes thrown in to offer extra longevity. Speed-runners and achievement hunters will truly be tested by the slices of Manual Samuel’s campaign served up as timed challenges, obtaining the gold cups in which will require total mastery of the game’s controls and a huge amount of coordination. The co-op story mode on the other hand is a more laid-back yet riotous affair as you try to make your way through Samuel’s adventure with control of his bodily functions shared between two local players. Initially it seems like a tall task, but with a little cooperation it actually makes for a rewarding way to play that is also a great test of your teamwork. 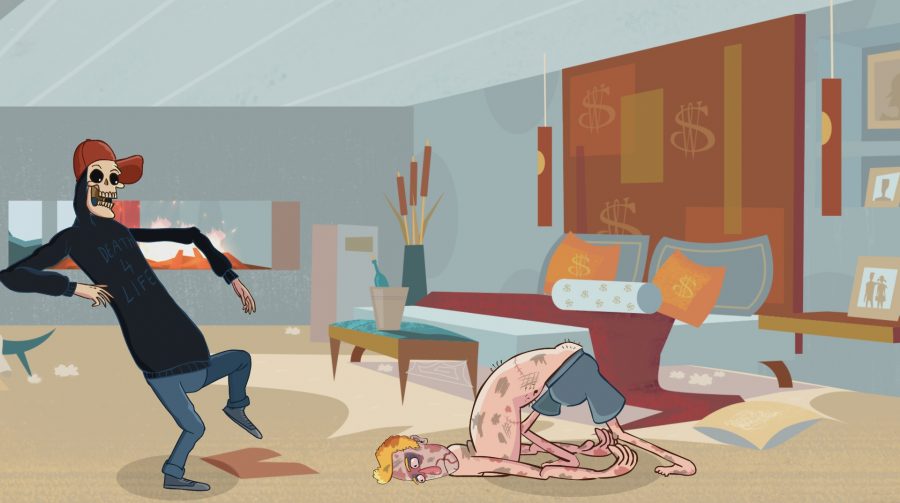 The demanding controls of Manual Samuel may get the better of less dexterous players, but  for those that can remain calm under pressure and don’t like to be beaten it’s an absolute blast. A mesmerising mixture of dark humour, beautifully drawn graphics and over-the-top characters, Manual Samuel is the most unique and refreshing game I’ve had the pleasure of playing in years. It’s a rare occurrence for a game so original and inventive like this to come along, so unless, like Death, you have no soul, I urge you to give it a try. I can promise you, it’s definitely not feces.

Manual Samuel is available on PS4, Xbox One and PC. We reviewed the Xbox One version.