Whilst I consider myself a devout gamer, one part of the stereotype I’ve not fulfilled is having a love for MMOs. Sure, I played WoW for a while, I dabbled with Lord of the Rings Online, and I had a good run with Star Wars: The Old Republic. Realistically though, I never spent more than 50 hours in one single MMO, as I reach the level cap and try out some end-game content, then I stop.

Some gamers however, make a single MMO their sole purpose for gaming, and never touch another game in a serious manner if at all (unless a better MMO comes out and they migrate, whole other topic!). These are the people that engage with their respective games’ communities and take part in things such as roleplaying, high-level end-game dungeons and raids, and really push themselves to take part in the more difficult and socially immersive aspects of their chosen titles. In one way, this genre is one of the few that demands that kind of repetitive grind, because the best loot is always a dice roll of 5%-10% after defeating the area’s boss, which comes after the chance you’ll clear the dungeon on hard mode to begin with. The difficulty of this genre’s end-game demands a certain level of commitment in both time and effort.

As a result, people who live and breathe these kinds of games have found other ways to immerse themselves in the experience. Things such as roleplaying (RP’ing) are popular when people have a little bit of downtime – or maybe that’s what they base their entire playthrough experience on; never gaining experience or levels for their character unless it unlocks more clothing or social-based items. Because a portion of the playerbase that engages with MMO games tend to only play that one game, they’ve adapted themselves to be more open-minded when it comes to trying out new ways to engage with the world. One such manner I found myself participating in recently in Final Fantasy XIV, was an in-game wedding.

“Because a portion of the playerbase that engages with MMO games tend to only play that one game, they’ve adapted themselves to be more open-minded when it comes to trying out new ways to engage with the world”

I’d say I’ve had a pretty colourful experience in my MMO adventures. I usually pick RP servers, because they tend to have more friendly players, and since they all talk in-character in the public/open chat channel, it feels as if I’m surrounded by hundreds of unique NPCs that I can interact with. It’s also a bit of an immersion-breaker when someone shouts out URLs in the chat bar or uses 1337-speak and you’re trying to feel like an adventurer in a fantasy-based world of magic. My fondest MMO days were in Lord of the Rings Online, when special events and festivals were held by the NPCs in-game. A lot of players would gather around and start playing songs together (there was a music system in-game where you could pick an instrument and play actual notes in sync with other players. Again, a whole other topic!) and generally spend time having fun with other people, taking a break from the grind of the game. It was these moments that I always remember the most, and despite not being a heavy RP’er myself, it was still nice to have that kind of environment surround me when I logged in and visited the nearest tavern.

Final Fantasy XIV however, officially supports in-game weddings. Not as a manner of roleplaying, but an actual event in-game that you can purchase from the store. Cutscenes play out, people attend an actual physical church within the world, and have an after-party at the end. The whole shebang. So it got me thinking, why have in-game weddings, and what’s the larger context behind all of this? You can probably think of a few situations yourself as to why this might be appropriate, and also what drives these kinds of decisions from both developers and players. I can see me and my best friend getting married in FF14, despite both being heterosexual males. Of course, we would never get married in real life, but there’s something funny about being best friends in real-life, and being married in-game, especially when both of our characters are female. That’s quite a casual way to look at it: pay for a fairly cheap wedding, get some bonus items out of it, invite friends to attend, and laugh at how ridiculous the whole situation is, whilst enjoying the post-marriage humour of announcing to people we’re married in-game afterwards. 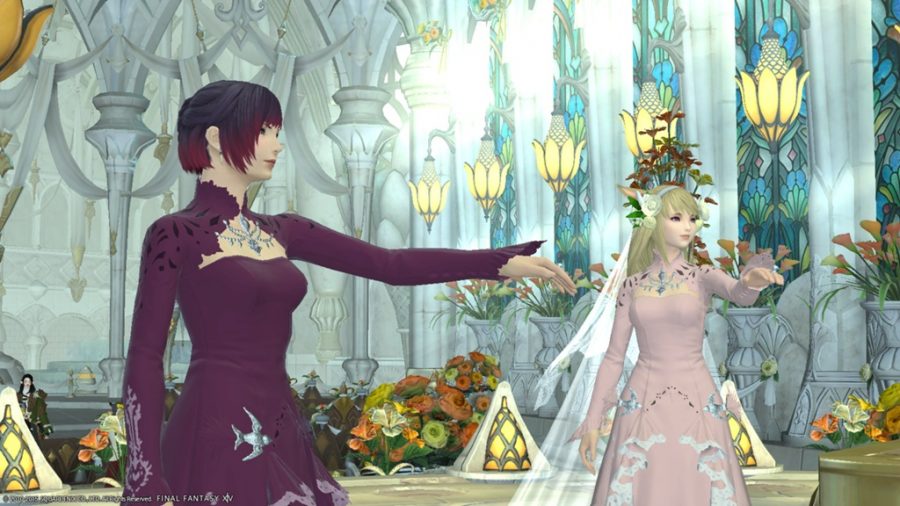 The one I attended had a more romantic tone to it, however. They were an actual couple in real life, and wanted to show their appreciation for each other by getting married in-game. They weren’t married in real life, but this in-game wedding was a way of expressing to each other how they felt, as they had been together a while. This is what I’d consider the sort of middle ground to the entire situation. Bringing part of your real lives into the game for a fun but sincere gesture of love; I think it’s kind of sweet. Then of course, on the complete opposite end of the spectrum, you have the people who you occasionally read about on various online forums: real couples getting married within a game for real. Two people whose obsession with a singular game brought them together use the same world to officially carry out the wedding legally. The ceremony is carried out in-game, but of course the wedding won’t be legally officiated, so it’s a kind of hybrid between roleplaying and real life.

So, after the deed is done, you have to ask what kind of result you’re hoping for post-marriage. Is the whole thing for comedic effect like it would be for my best friend and I? Would it be to help strengthen a relationship like the couple’s wedding I attended? Would it be to enhance the RP experience? There are all kinds of motives and reasoning behind in-game marriages, and you can even extend this outside of the MMO circle to games like Skyrim or Fable. What are the reasonings behind getting married in those games? For me, I would answer differently for both. For Fable, I wanted the achievements, simple as! I suppose it also added some life to my houses by having an NPC occupy them. For Skyrim, it was immersion. I felt like I lived in that world; I wanted an actual property to call home, and I wanted someone to be there, to make me feel like I was connected and immersed in that experience. There was no reward for doing so, no special items to acquire or special weapons/equipment that would be given; it was simply for the world-building and immersion.

“Bringing part of your real lives into the game for a fun but sincere gesture of love; I think it’s kind of sweet”

Going back to MMO games for a bit, Black Desert Online is quite the playground for RP’ing in-game. Controversy for the title and its microtransactions aside for a moment, it’s quite possible to play the game from the get-go without ever killing a single enemy, yet experience a vast majority of what the game has to offer. Because of what the game allows, I actually tried to play the game non-violently for my first 10 hours to see how much enjoyment I could get from it before feeling I had to play it like a traditional RPG. Turns out it’s entirely possible. Because of the lack of any real levelling system, I was able to live out a fairly pleasant existence. I managed to acquire a property in a nearby harbour village, I’d cut down wood and collect mining resources, and transport those goods on a cart from town to town for better prices on the stock market. I was even able to visit a nearby fishing island by hitchhiking rides on someone else’s boat (for a fee). The entire experience was player-driven; other players had built their own boats themselves, and the space was filled people living in the towns peacefully, never fighting a single enemy.

It makes you wonder just how far you can push the social experience of an MMO. Black Desert Online is a good example of a game that you can really bend and warp to your own fantasy, playing a character exactly how you want. It’s even possible to lean back against a wall, or sit on one properly where your character actually bends their legs over the edge realistically; it’s these small attentions to detail that help ground yourself in the world. Bolstered by the world’s lack of definition and objectives, how you spend your time in the game is entirely up to you – there’s no need to adhere to missions or level up in any particular way. Garry’s Mod and its RP servers are another good example of how loosely designed rulesets can make for a great sandbox that players can define their own experience in. 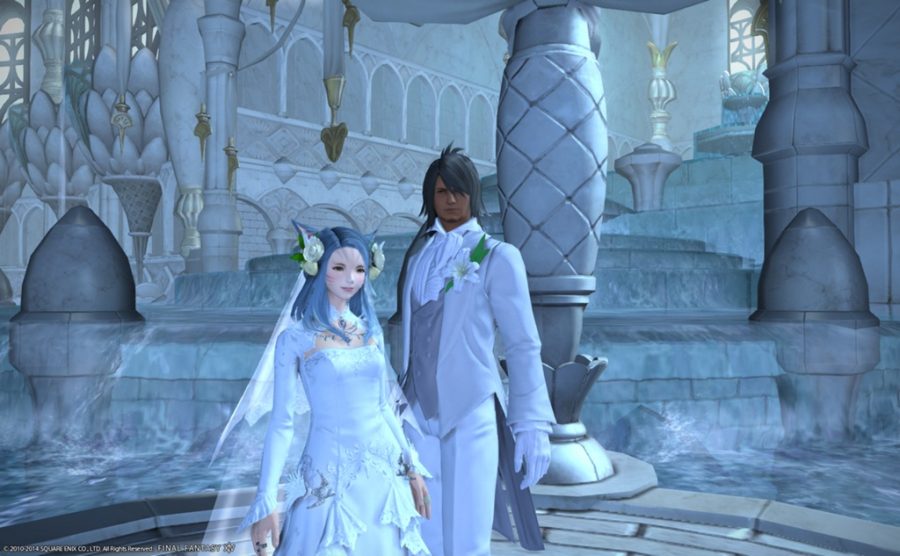 So, there are many reasons for taking part in an in-game social event like a wedding. Beyond having fun, roleplaying, or showing appreciation for someone in a very real and serious manner, their utility is broad and loose, and can be tailored to whatever a player needs them to be. That’s what I admire most about MMOs and sandbox games; they focus on creating spaces to be interacted with by a large playerbase, often with no restrictions on how that space is used. Fill that space with enough people of various cultures and personalities, and suddenly it becomes a space of experimentation and mutation. Even though I may not log into Final Fantasy XIV every night for 5+ hours at at time, I can still appreciate and participate in various social anomalies such as the in-game wedding and roleplaying events that the dedicated players cultivate themselves and sustain through their mere presence in the world. These are the people that create and dominate the space, but is part of what makes the world feel alive. As a result, even casual players can feel more immersed in what becomes very much a living and breathing world.

Have you experienced any interesting roleplaying or in-game events? Was it just for fun or did it serve a real social purpose outside of the game? Tell us about your experiences in the comments, and share some of your stories with us!