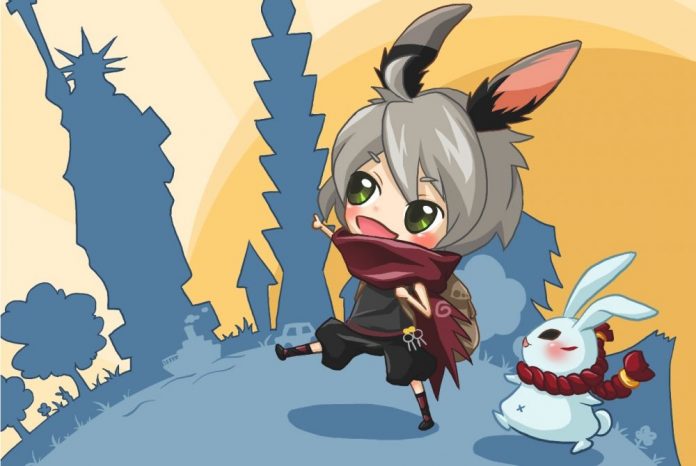 Best described as a puzzle platformer, you take the role of Usagimaru, a rabbit-like humanoid ninja, who must use his skills in order to rescue his people. Despite its long name, it’s a fairly simple premise, and as a puzzle game that’s exactly what I want. On paper, the concept is sound enough and the classic Japanese aesthetic makes a refreshing change from the overused far-flung future, or the modern era.

The Mysterious Karakuri Castle is made up of several areas to tackle, each of which has a select number of levels. In order to move on you need to complete the previous chapters and so forth. For example, Usagimaru begins in the Maple Forest, which consists of ten stages. Complete them all and you can move on to the next world. Prior to this there are also five optional tutorial demonstrations for players to try out although I would argue they aren’t very helpful, but more on that later.

The goal is to rescue one villager per stage by traversing past monsters, overcoming obstacles, and escort said villager back to the safe zone. Usagimaru is armed with several tools: his kunai knife can shatter certain objects like rocks so that he may sneak under them; the grappling hook can grab blocks and push them towards him. If there is an air vent anywhere in the level, he can glide upwards with his kite. Lastly the pinwheel, arguably the most important part of Usagimaru’s arsenal, can be propped up an infinite amount of times to transport the player back to that point should they die, or hit the rewind button.

I love everything about the game’s presentation. The music is simple and repetitive, but it fits well for the genre. Next, the Japanese aesthetic, mixing in the mythology of different races and monsters to give it an authentic style, is again fantastic. Not to mention the game’s actual graphics; it’s not quite pixel art, but it is eye-catching an pleasantly colourful in that same way. Unfortunately, that’s sort of where my care for Ninja Usagimaru: The Mysterious Karakuri Castle ends. 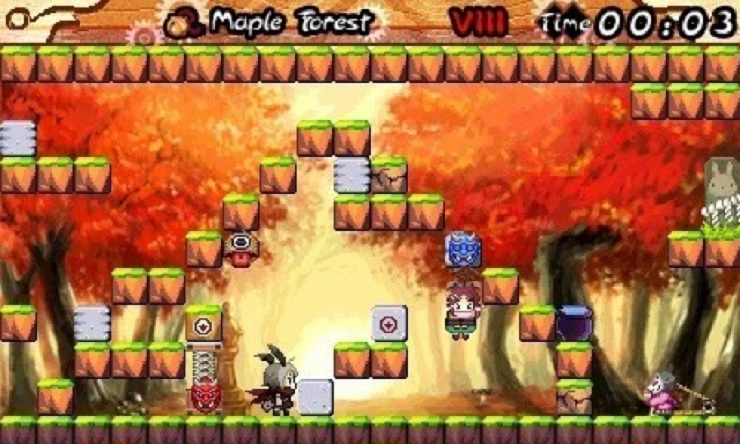 Admittedly I’m not a huge fan of puzzle games, but there are a few that have managed to catch my fancy such as Portal, or to name another Nintendo 3DS game, Pushmo. The thing about a well-designed puzzle game is that it tries to ease you into the experience by starting off easy and gaining momentum as the game progresses. It makes the player feel like they’re learning something. Even a tutorial can do that, but Ninja Usagimaru: The Mysterious Karakuri Castle fails on both of these concepts. The game begins hard and ends even harder.

To reiterate, it’s not that I hate puzzle games, or bad at them, but given the choice I usually go for something else. When I do sit down with a puzzler I’d say my skills are average. I’m not terrible, but not great either. That said, Ninja Usagimaru: The Mysterious Karakuri Castle was hard in that I couldn’t even figure what it was I had to do, or in the case of the lacklustre tutorial, what I could do. To be rather blunt and self-deprecating, it made me feel like a moron. A game shouldn’t do that to a player at the very beginning of the game. Even Dark Souls, a series known for being difficult, teaches players why they’re failing. This, well, this is just plain uneven planning.

At the very least, the pinwheel and its ability to reset your position, is the most useful tool in Usagimaru’s belt. If not for that I fear I wouldn’t have been able to finish. So yes, I did manage to bang my head against a desk several hundred times and complete The Mysterious Karakuri Castle, but I didn’t feel joy when completing a stage. Moreso, it was relief that I was one step closer to being done with the game.

It’s unfortunate to say that Ninja Usagimaru: The Mysterious Karakuri Castle is one of the worst games I’ve had to review in a while. Not because it’s straight up bad; I love the aesthetic and concept, but it’s so unbalanced and unfairly difficult that it’s just not fun to play. Perhaps I’m just terrible at it, or it just wasn’t a game for me. Still, I tried my hand at it, gave it my best shot, but by and large, I didn’t have fun – which I find is rather import to include in video games.

Ninja Usagimaru: The Mysteriosu Karakuri Castle is available on 3DS.