The rumour goes that Oh…Sir! was developed at a gamejam where copious amounts of alcohol fuelled its creation.

Whether or not that’s true, the end result is a polished and fine-tuned game which turns out some great surprises. If you are a fan of Monty Python, Blackadder, or other such wonders of British comedy, then this random and deceptively addictive insult-brawler (for lack of a better generic bracket) will delight you.

You can play Oh…Sir! against the computer in an “instant action” match, or face off against the CPU in a tournament setting battling through a fighter-game style series of pre-arranged matches that get progressively harder. Alternatively you can play locally against a mate or online. The matches themselves are very well thought out, with multiple playable characters and various arenas, each locale offering a unique story as to why the argument takes place: the classic example being the Pet Shop, in which we get a tasteful re-run of the famous Monty Python “Dead Parrot” sketch.

These characters are more than visually divergent. Each character has a different weakness, a subject that will wound them particularly deeply in a slagging-off match.  Sir Knight, the educated old professor-type, struggles to keep up with modernity. Mrs Maggie fears her decrepitude and impending death. Mr John Shufflebottom has no sense of style, and is very conscious of the fact. In addition, each of the characters has a unique pool of phrases to draw from when constructing insults, but we’ll get to that in a minute. Needless to say, when I watched the trailer for this game, I did not expect to have multiple playable characters, each with different strategies and tactics – but the gameplay is surprisingly rich here and gives Oh…Sir! big replayability-factor. 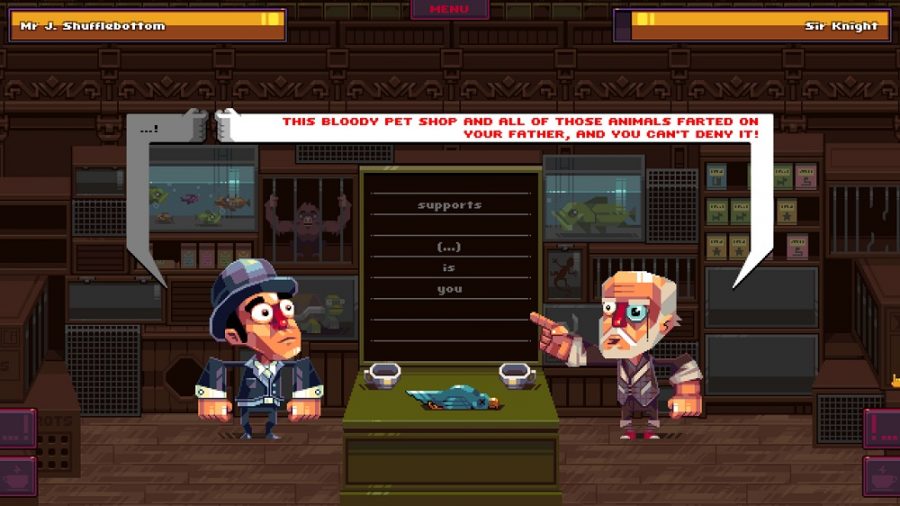 To win a match, you have to construct insults, and the better and more elaborate the insult, the more damage it will do. You can get bonus damage for pulling off a combo (using the same insult topic multiple times in a row) or finding out the opponent’s weakness. You also have cruder, more abrasive insults which earn you the special tag “rude”, and often do more damage, but these are rare, so it’s best to save them for when it really counts.

The mechanics for constructing insults are beautifully simple. There is a pool of words both players/characters can draw from. The insult has to include a subject: “Your mother”, “You”, “Your son”, “Your hat”. You can then build from there, employing conjunctions to extend your insults in ridiculous and preposterous ways. Sometimes you can tactically take words or phrases away from your opponent even when they are not that useful to you. For example, if I was playing Mrs Maggie, I might want to take “is deceased” away from my opponent as death and infirmity are weaknesses for my character. Each character also has a unique pool of two insult components they can draw from. Sir Knight, with his education, can quote Shakespeare, offering phrases such as “a cream-faced loon” (which is from Macbeth – and incidentally, there are entire compendious volumes written on Shakespeare’s most obscure and ludicrous insults, so there’s plenty for Sir Knight to work with!). Every character has a unique arsenal, and once per turn, they can refresh the two insult components by taking a sip of tea.

There is a simple and innocent pleasure in pulling off a great insult, whether it’s against the computer or another player. When, disbelieving my own eyes, I managed to outwit a player and pull together: “Your sister was born in a demon’s asshole and will always be alone”, I couldn’t stop the belly laughter. Childish, I know, but that was always the nature of Monty Python’s humour. And it is the famous line in the Monty Python and the Holy Grail: “Your father smelled of elderberries!” that might just have inspired the whole game. Mixed in with this very infantile humour is a great sense of the British absurd: sipping tea between remorseless defamation of character, and combining gamer in-jokes: “Your house has only local multiplayer…”; “Your father still uses Windows Vista…”. 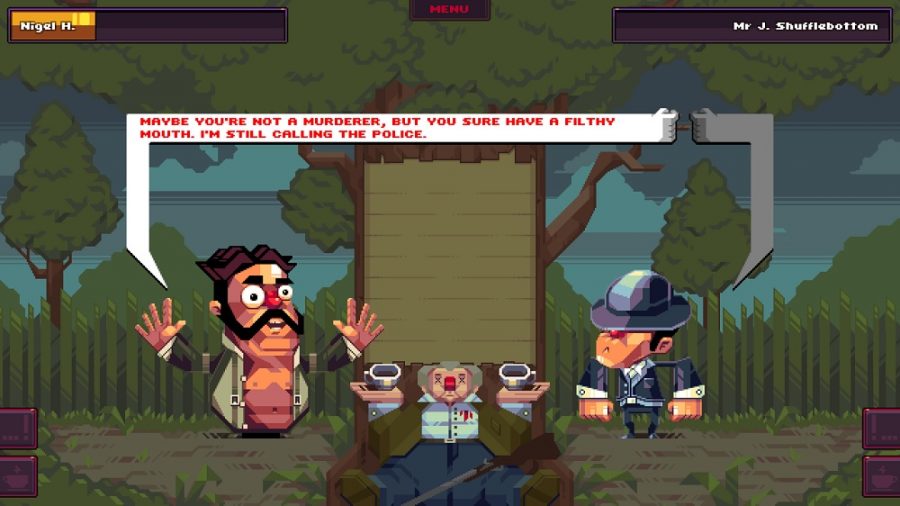 What’s great is that Oh…Sir! might have the kooky weirdness of an indie game, but it is polished, with a smooth interface, menus and virtually zero load time; it also offers the same range of game modes that might be expected from a larger title. Priced at £1.50, one can hardly complain. The local matches are great fun and take you back to the old days of “couch gaming”; I feel in some ways this is the optimum way to enjoy the game, although be warned, with a 15 second timer per turn, you will have to quickly pass the mouse/touchpad between you: there’s sadly no other way to control the game (at least not that I’ve discovered). It’s a little inconvenient, but at least adds to the tension and fun. The CPU matches are engaging, and the AI has been quite cleverly constructed so that it will take adventurous risks with its insults and not just settle for shorter insults consistently, which would be boring and easy to predict. The tournament is short but entertaining: some of the late-game “bosses” and subsequently unlockable characters are hilarious fun. Without giving too much away, you might see a few familiar faces amongst the unlockable characters, and it is definitely worth playing the tournament mode to get to your hands on them.

Oh…Sir! is very much what it says on the tin: short, sweet, fun and with just enough replayability to justify its existence. It is not countless hours of entertainment – you can certainly see the end of it – but it never bills itself as such and for its modest price there is really excellent value for money here. So many games attempt humour and wit and fall painfully short of the mark, but Oh…Sir! manages to be outrageously funny without trying too hard. So, if you don’t mind, I’m off to insult more minging peasants born to a rutting fishmonger.

Oh…Sir! The Insult Simulator is available on PC.