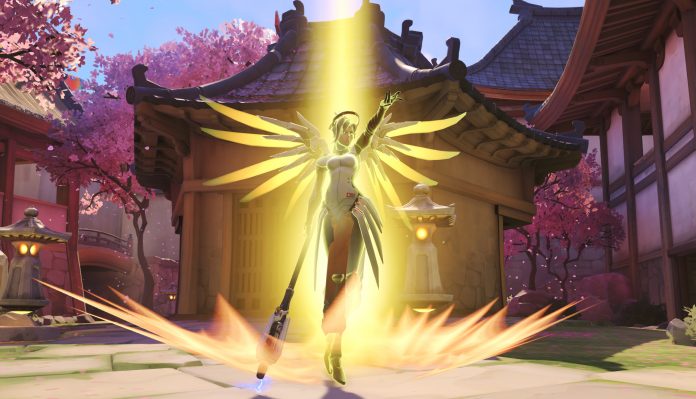 “Guys, could you please just die at the same time so I can res you?”

At its worst, competitive Overwatch causes me to scream and sob so violently that it’s pervaded the noisy, brash clattering of screens and tossing keyboards. My saltiness now encompasses silence. Rasping, barely audible exhalations and the tingly feeling of tear drops quietly sliding down my cheeks are now a staple reaction to my “all hope is lost” ranked experience. Previously those who insta-locked Bastion would tilt me off the planet; previously Torbjorn’s turrets would pick up “Play of the Game” while the steadfast dwarf himself would stare resolutely at a wall as his human overlord pissed off to go make a coffee and fumbled to open a pack of Walkers. Now though, times have changed. People have long figured out how to deal with their inherently linear abilities and playstyles.

All of a sudden, in the last few weeks, another irritating monster has serenely floated in to take their spot. A blonde haired, stave-wielding lady who really riles me up. Before I continue on my rant (albeit, well informed) I’d like to quickly point out that, yes, I recognise that there are a few heroes that need some looking into. Most notably: Mei. Other heroes such as Symmetra are already getting a complete overhaul because Game Director Jeff Kaplan wasn’t pleased with how she was being utilised – or rather under-utilised – by teams.

So, why have I picked out Mercy, knowing full well that Overwatch will always develop a meta game and have heroes that are “stronger” than others during certain patches? It’s the frustrating notion of knowing that one particular aspect of her kit means she’s a hero with a hideously obnoxious game-changer.

Take Ana, our favourite grandmother-sniper-healer. She’s home to an incredibly high skill-cap and in turn takes some real finesse to play effectively. You need to hit your shots, fire off Sleep Darts under pressure, and don’t get me started on those cans of healing juice – their ability to dramatically alter a team fight is second to none. Oh, and her Nano Boost is outrageously powerful when combo’d with the likes of a swinging Reinhardt or a Beyblade Reaper. She can rattle off shots from a distance or hop around with her buddies at close quarters. The ways of playing her vary, she’s active and plays a vital role through simply being present on the battlefield with her team.

Now Mercy can be played in a similar manner, lithely dashing around healing or power-boosting allies. Trouble is, good teams will simply place a crosshair on her blonde locks and never let her slip from their sights. Good Genjis will constantly pursue, Tracers will poke, Roadhogs will literally ignore everyone and hook her through time and space in order to bring an end to her existence. Seems fair enough though? Targeting the healer is a pretty standard strategy, probably employed by countless ancient civilisations? 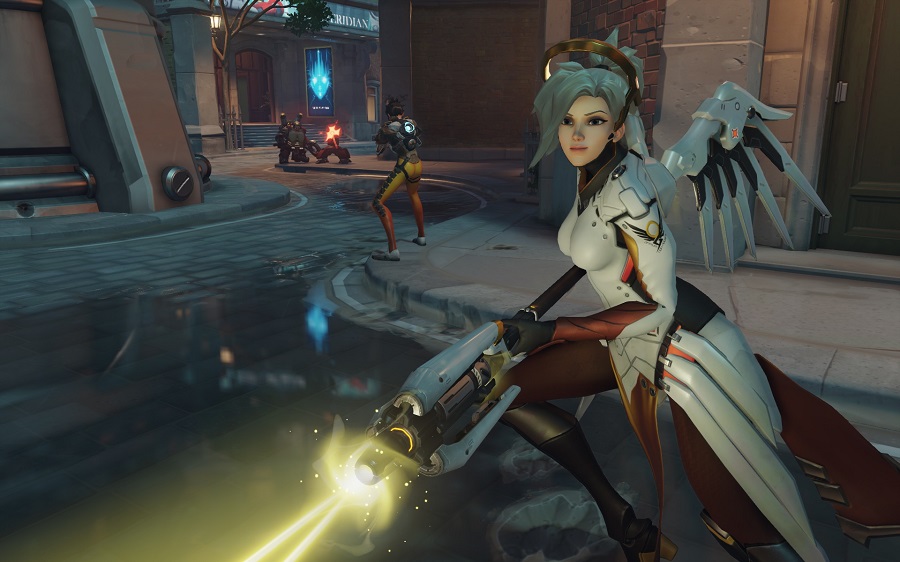 Mercy’s ultimate, Resurrect, allows her to – you guessed it – resurrect fallen allies. It charges quickly if your team’s taking damage and you’re there topping them up with the good stuff. Seems fair enough to me, considering it’s risky business planting yourself in the midst of a cackling Junkrat’s ticking grenades or Zenyatta’s shiny orbs of “dink”. So, for many, Solid Snake accurately represents a play style that they can somehow get away with. And this makes me stand up from my rocking chair, shake my cane and blither at the sky. Is this really what the developers wanted?

I’ve encountered Mercy players carry a team by doing a touch of healing, then just hiding away – literally going afk for a while and encouraging their team to fight without them. “Don’t worry boys and girls, I’ve got Resurrect. Just fight and I’ll give us a second chance.”

In Overwatch, team fights are part and parcel of the experience. Two teams of six lock heads and one emerges as the victor. There’s usually a bit of build up as teams tickle each other and wait for that one opportunity to strike. Winning a team fight requires strategy (most of the time) and a fair amount of effort, at least enough to breathe a sigh of relief as you push the payload to the next checkpoint. You might decide to get a “pick” and wait for your resident Hanzo main to actually land an arrow before taking the fight to the opposition. You might hope to perform an initial push into the site, force them to blow as many ultimate abilities as you can, before regrouping and using yours to gain the advantage; again it’s things like, teamwork, mind games and outplays that set a team apart. So when a Mercy player hazily wakes from their long slumber, blinks rapidly, smashes the keyboard, flies into a host of dead bodies, presses Resurrect before being bludgeoned to death by Reinhardt’s unforgiving hammer and trampled upon by a D.V.A’s mechanical stompers – I sigh deeply as I imagine this very player with a smug grin plastered on their face as they walk away from their PC to attend to the kettle in the knowledge that they’ve also earned play of the game.

Something’s just not right here. And I believe it’s the fact that Mercy’s ultimate has the power to resurrect absolutely everyone. If she’s pottering about, your chances of winning a team fight ultimately rely on taking her out. If you don’t, or if you’re fighting near their spawn point, then you’ve more than likely lost it; unless you’ve got a dastardly Mercy player waiting in the wings too. Team fights then revolve around one ginormous, central player who shoulders a ton of responsibility. An entire game of Overwatch then devolves and degenerates into a battle between resurrections and the heart-rending, blood-boiling moment of realisation (“TILL VALHALLA”) when you have to win two team fights instead of one.

Top tier players and co-ordinated teams will have far less trouble with Mercy, but that’s not the point. Ultimately, I’m frustrated with the notion that her Resurrection ability affects the ebb and flow of a game so drastically. It’s so powerful that to play her effectively means to hide away when things go down… or not play her at all in fear of being assassinated and creating a “Where’s my Res??????!!!!” situation. Other support heroes such as Lucio and Ana fit a role; they feel good to play because their abilities are balanced around bolstering team mates when they’re alive and kicking. It still requires them to engage brains and make use of that rather helpful button press of yours. Less so with Mercy. If you go down, the world practically ceases to exist, and your team will more than likely call tech support to report you twenty times (!!!). There’s so much power, so much responsibility, so much pressure and so much reliance on an ultimate ability – that’s a little too “ultimate”. 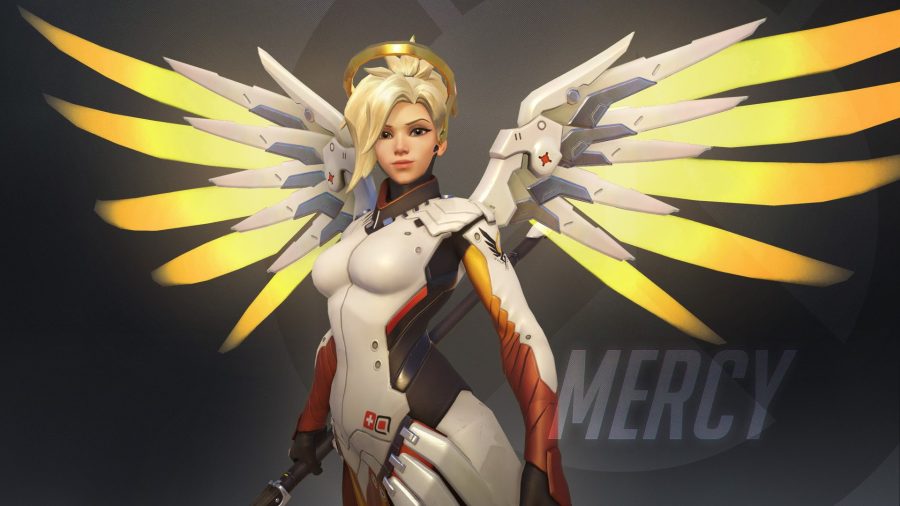 Going by my rant, everyone’s out to get her, and for good reason. If you don’t stay alive, it’s a five versus six scenario, meaning you’re more likely to lose and fall victim to a flurry of hastily typed, grammatically incorrect abuse I’ve dubbed the “flamethrower”. However, if you manage to stay alive, but your team loses the fight fair and square, one button press can undo that mistake and turn the tides. It’s a risk/reward seesaw with reward’s plump rump tipping the scales. The risk of playing her is outweighed by a reward that’s difficult to punish and rubbish to play against.

I’m no game designer; admittedly I’m a stewing Overwatch player who prays that Blizzard are keeping a good eye on Mercy and the mechanics behind her angelic ultimate. Perhaps up to three can be brought back from the grave? Maybe it’s a pick and choose scenario? Potentially alter her cooldown?

Every game I step into, I make sure to initiate my “EradicateMercy.exe” file, located deep within my noggin, or face the consequences of my misstep.