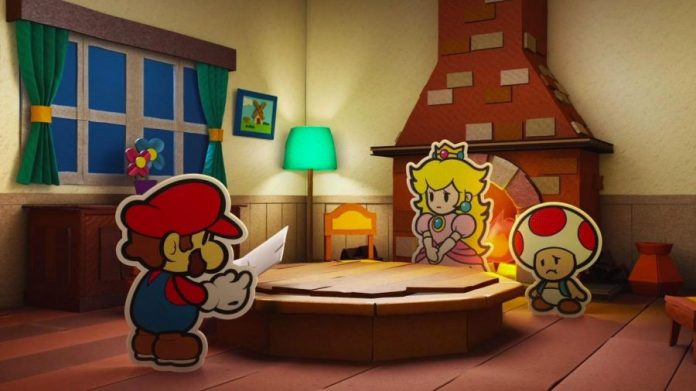 Venture to Prism Island with Mario and company to restore colour to the once vibrant world. Collect cards, paint the world, and unravel the mystery of the missing paint! It’s a stunning world full of fun, exploration, and excitement. Paper Mario: Color Splash will keep you smiling from start to finish. Don’t let this one pass you by.

The original Paper Mario made big waves when it arrived 2001. It was Mario and his pals in their usual 2D antics, but had a fresh aesthetic and unique gameplay. Paper Mario: Color Splash captivates with the same awe and playability as the original. Help Mario and his new paint-can buddy, Huey, track down some paint thieves and bring colour back to Prism Island. Lush visuals, solid mechanics, and some of the best lines written in a Mario game await you. It is an enthralling, enveloping adventure from the get go. With the Wii U in its dying days, with few AAA titles left in its life, Paper Mario: Color Splash is a true reason to dust yours off. Old and new fans of the franchise are sure to fall in love.

Much like its fellow Paper Mario games, one word comes to mind: charming. The world, the characters, the motions… it all feels so alive and vivid. Prism Island is gorgeously rendered, and the colours within the game shimmer. But, Mario isn’t there to sight see, at least, not anymore shortly after the game starts. He must set out, with Huey, to track down the Paint Stars which will bring colour back to Prism Island’s fabled fountain, which has run dry. You’ll venture across the island through 3D-ish worlds; its basically a side-scroller but some levels have depth. The characters you meet are all outspoken and most have tremendous senses of humour. The game certainly makes an argument for being one of Nintendo’s funniest games in its storied history. The majority of the game is spent battling, however, which is structured pretty darn well. 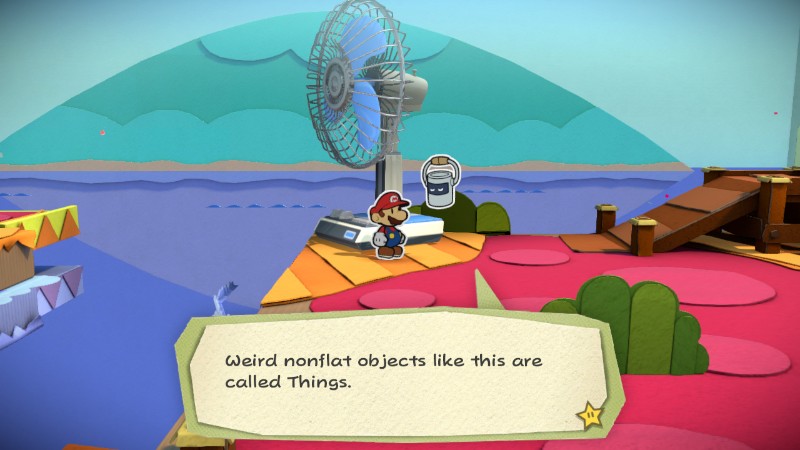 Battling is designed in an approachable way, letting the player decide how, and when, battling ensues. Much like the classic Super Mario RPG: Legend of the Seven Stars, you can avoid battles by staying out of enemy sight. You can also initiate battles with surprise attacks on enemies who haven’t noticed you yet, using your trusty hammer. Once a battle begins, you attack using a variety of cards. Cards represent attacks like jumps, hammers, and fire flowers, as well as powerups and health refills like mushrooms. As you advance, you’ll gain the ability to use more cards at once. Pick a card, and then you can paint it as much as you’d like to power it up a bit, then you play it. All this is done on the Gamepad (which you have to play with), which gets a bit tenuous, but doesn’t take away from the experience.

There is a bit of strategy when it comes to multiple enemies and boss fights. Some enemies will prevent you from doing certain moves, like jump attacks. You’ll have to structure your attacks so you don’t use the wrong card at the wrong time, but you can always use just a single card if you’re nervous. Bosses basically have one-hit moves to kill you, and require you to use a special card that you found earlier in the level. These cards will be 3D objects you find, or “Things” as Huey calls them. Save them, you’ll need them. The battling is reminiscent of Mario RPG battles, and the game itself is one of the best Mario titles since then. Economical card usage will benefit you greatly, as cards can only be purchased from the hub world, although they appear in other locations.

You’ll find blank spots in the world which you can paint with your hammer, and tons of secret areas. Filling in blank spots, defeating enemies and breaking boxes can all result in finding cards and coins to buy more cards. Tiny hammers will also drop from these areas which will increase your maximum paint capacity. You can also find certain areas that allow you to ‘cut’ them, and create a 3D piece which helps you move to inaccessible areas. Prism Island is full of secrets, and finding them all is an adventure worth having in itself. It was the most fun I’ve had since Super Mario Sunshine. You won’t have the vast array of tools you did in Sunshine, but you’ll have just as much fun, and the game is just as strikingly beautiful. Nintendo made the Wii U relevant again with this one, however briefly.

Paper Mario: Color Splash is a gem. A look back into what Nintendo can do, and a shining example of why they should never be counted out. It’ll keep you laughing, engaged, and having a blast. It truly took my breath away at times, and looks and plays with staggering beauty. It is fluid and wonderfully executed. If you want your Wii U to be used again, pick this title up. It will charm any player with its humour, light-hearted nature, and playability. It reminded me why I’ll always defend Nintendo, and hopefully it does for you too.

Paper Mario: Color Splash is available on Wii U.