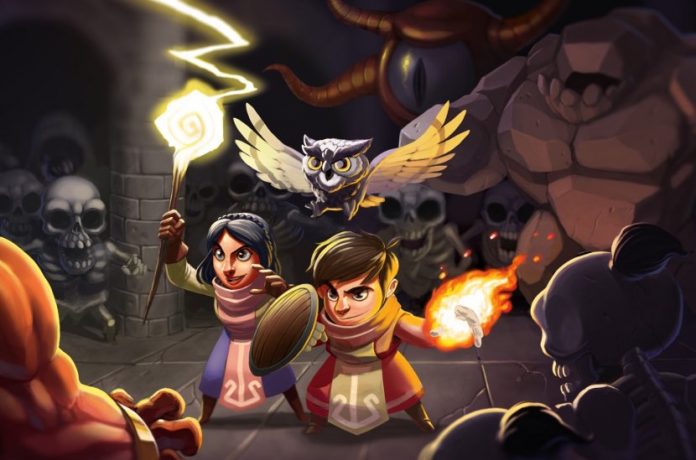 Deep into a dungeon, surrounded by foes, allies defeated, and health low, I fear my time is up.

My health bar is depleting, the dungeon’s boss can smell my fear, and I must act quickly. On my turn, I cast a spell, and I’m transported several tiles away with my health somewhat replenished. My allies are subsequently revived, mirroring the rekindling belief that I can win this battle. I pull out my bow and defeat two enemies, the tide of battle is turning. Similarly, my allies each slay an enemy and only the boss remains. Over the next couple of minutes, an epic turn-based battle takes place, a clash that will become legend in the hearts of the inhabitants of Antarit, the hidden, mysterious city-hub.

It is encounters like these that define Rogue Wizards. These fantastic, nail-biting moments of tension create a palpable sense of apprehension leading into each new dungeon. The fear of the unknown, heightened by procedurally generated levels, lends itself well to the game’s great moment-to-moment gameplay, something which is complemented well by solid gameplay systems and light RPG mechanics, despite the game’s frequent difficulty spikes.

Rogue Wizards, a tactical dungeon crawler from developer Spellbind Studios was, up until recently, an unknown quantity to me. Indeed, the dungeon crawler genre as a whole is not usually the type of game that I often gravitate towards. However, after hours of playing Rogue Wizards, I can confidently say that it is a genre that I will be returning to in the near future. Rogue Wizards’ satisfying blend of loot grabbing and levelling up your character entertained me for countless hours, whilst keeping me fully engaged with what I was playing. If you like this genre, this game is undoubtedly something you should check out, even if it does have a couple of flaws which hinder the overall experience.

You start the game as a character with the name and gender of your own choosing, quickly discovering a scroll within a tavern that you are frequenting. This scroll then transports the protagonist to their first dungeon where they must face their initial test. Eventually, your character learns that this scroll only appears to those with magical abilities and that the Rogue Wizards require your help in defeating the evil wizard Hosperak who has taken over the Guild Council. Hosperak is stealing power from the six elemental realms and is thus violating the balance of elemental magic. As a result, the boundaries between the realms have weakened, and rifts are opening all over Rilfanor, the land in which Antarit is situated. Demonic monsters are invading through these rifts and threatening the sanctity of the land. Your task is to stop Hosperak and rid the region of evil. 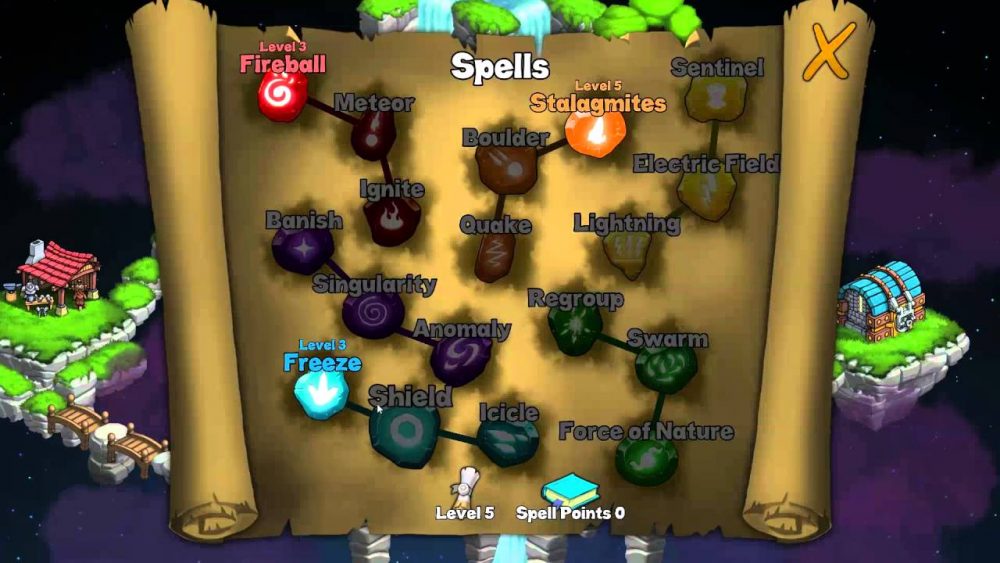 As mundane and perhaps derivative as the story sounds, it is not the main draw of the game, and simply stands as an outlet through which the game is able to take the player through multiple unconnected locations. Despite its unimaginative nature, the story is finely written and inoffensive, even attempting (though largely failing) to include some social commentary within its narrative. However, I did appreciate how Rogue Wizards goes out of its way to create a believable and convincing world. From the outset, the tone of the story portrays the sense that Rilfanor has a deep history which is ripe for discovering long lost secrets.

The crown jewel of Rogue Wizards is unquestionably its gameplay. At the beginning of each new quest, the player is transported to a dungeon which, as previously mentioned, is procedurally generated. In laymen’s terms, this means that the levels in which the gameplay takes place are never the same, and thus this adds greatly to the replayability of Rogue Wizards’ fine combat and exploration. Within each dungeon lie monstrous creatures, hidden treasure, loot, and of course a boss encounter. Combat in Rogue Wizards essentially boils down to a turn-based contest between your character and the attacking foe, with each move ending the corresponding individual’s turn. Furthermore, you have a litany of offensive measures at your disposal, ranging from standard swords, bows, staffs and even powerful magic, something which is particularly useful against stronger opponents.

Battling enemies within Rogue Wizards is strangely, yet satisfyingly reminiscent of early Pokémon games, as you fight your adversaries in an almost mechanical nature, taking turns to inflict damage upon the other until one of you is vanquished. Whilst there will be those who find this fighting system unappealing, as someone who grew up obsessing themselves over each new entry in the Pokémon series, I found the combat entertainingly nostalgic.

Moreover, killing enemies grants the player experience points which culminates in levelling your character. Once a new level has been achieved, stat boosts can applied to one of three categories which bolster the player’s power, finesse, and stamina respectively, in addition to increasing the strength of the newfound magical abilities that your character now possesses. I was also a big fan of how the game rewards the player for having their own style of play. By continually using an individual weapon, item of clothing, or jewellery piece, this equipment also levels up, affording additional perks and power ups. This is how player progression should be. In rewarding the player for playing the way they want to, Rogue Wizards creates a great sense of progression and most importantly, a reason to continue playing. 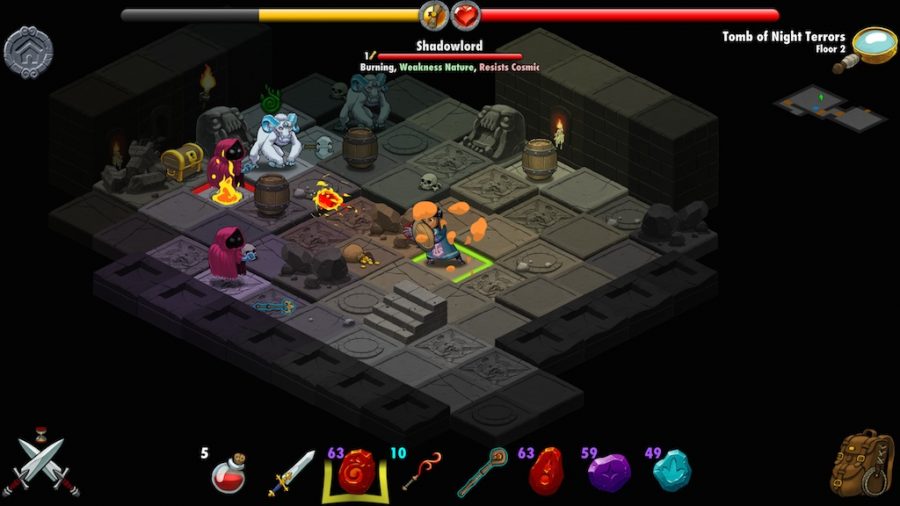 Gameplay isn’t flawless however. Often the game suffers unusual and frustrating difficulty spikes, frequently causing my progress to stop in its tracks. Here is where the game falters somewhat. By removing that omnipresent sense of progression and hindering the player’s quest for new and better loot, Rogue Wizards stumbles through its middle-portion, causing immense annoyance. This problem is partially rectified by the game’s procedural nature, although even this cannot entirely rid the game of its turbulent moments.

Rogue Wizards is inherently difficult, but for the most part, it’s a rewarding, challenging difficulty that keeps the player engaged. That said, during these vexing difficulty spikes, I would not blame someone if they were to simply leave the game and never return. I suffered these instances frequently enough that they became a problem and could’ve easily tarnished what is otherwise a superb experience. I appreciate the need to grind levels on occasion within video games, but the fact that Rogue Wizards doesn’t allow you to replay past areas, only furthers the sense that you’re continually running into a brick wall with no cushioning to ease the impact. Aside from these over-numerous moments of annoyance, gameplay cannot be faulted and is for the most part a solid and enjoyable turn-based system.

Stylistically, Rogue Wizards is simple and the user-interface has a clean look, allowing for minimal distractions during gameplay. The characters themselves all look distinctly unique and have an almost childish charm to them. The world and the levels you explore are varied enough to avoid monotony, and enemies are creatively well-designed. My only real complaint within the visual department concerns the lack of change that different pieces of loot have on your character’s appearance. No matter which armour piece or weapon you equip, the protagonist’s external design does not change, which is a real shame when you want to boaster your fancy new armour set. Overall however, the game looks quaintly pretty and with minimal slow-down, is a pleasure to play.

In summary, Rogue Wizards is a great game, even if it is marred by a flat story and an almost game-defining series of difficulty spikes. Fortunately, the game manages to avoid this unflattering label by instead defining itself through its predominately tremendous gameplay, tense moments of apprehensive combat, and a simple yet aesthetically pleasing visual design. Fans of the genre should definitely give Rogue Wizards a play, as it will without a doubt scratch that dungeon-crawling itch. Even individuals who have never particularly given the genre much attention should also consider giving it a try. I, myself was such an individual and now, many hours and many tales of battle later, am fully converted.

Rogue Wizards is available on PC.