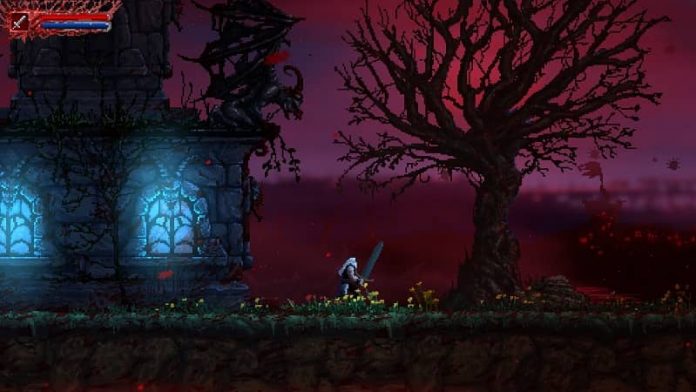 Slain: yes it’s the name of the game, but you better get used to seeing it.

Slain, Slain, Slain, Slain, Slain. Had enough yet? You see, raised from the ashes of its original – and rather problematic –  PC release back in March, Slain: Back from Hell may well be upgraded and overhauled compared to its predecessor, but it still has one major issue: it’s just too god damn difficult. Like I said, better get used to seeing the word slain then, as every time you die you’ll be treated to it taking pride in the centre of your screen, taunting you to have just one more go against all odds.

As a throwback to classic side-scrolling titles like Castlevania, I have to admit I was eager to dig into Slain: Back from Hell. Sometimes I adore the comforting simplicity of a title that only demands I move from one side of the screen to the other, avoiding damage and defeating foes without any complex game mechanics. Throw in some heavy metal music and gothic visuals and I’m all in. The trouble with Slain: Back from Hell, however, is that your progress often doesn’t feel like it’s worth the gruelling effort, especially when the fundamentals of its basic systems do little to instil confidence in your abilities.

The mechanics are just as you’d expect: you have an attack button which can be pressed multiple times to perform a combo, a jump button to leap mighty gaps and negotiate platforms, a block button to reduce the damage from incoming attacks, and finally, a magic button to disperse your enemies from afar. Oh, and let’s not forget the all-important back dash move to quickly get out of the way of danger. Many of your commands have their own secondary quirks too, such as the attack button’s charged strike and the block button’s parry, both requiring a keen eye and expert timing. Slain: Back from Hell mechanically gets it wrong on the very basic level though, often leaving you ill-equipped to deal with the hordes of grotesque creatures that are thrown as you.

For a start, your attacks feel too sluggish and laboured for what is at times twitch centred gameplay. Many enemies hurl projectiles at you, and with crouching or blocking not really an option to avoid taking damage, deflecting them is your only choice. Often though, they’ll appear as you’re progressing forward, giving you little chance to do so, or during the middle of a skirmish with close range foes in which it’s hard to even see them. Worst of all though is that deflecting projectiles back at an attacker usually does little to no damage, occasionally stunning them at best. Trust me, when you’re surrounded by projectile-throwing foes and are standing toe-to-toe with other beasts in your face too, trying to deflect attacks from both sides whilst avoiding damage and getting the odd hit in is a frustrating experience that just feels unfair. 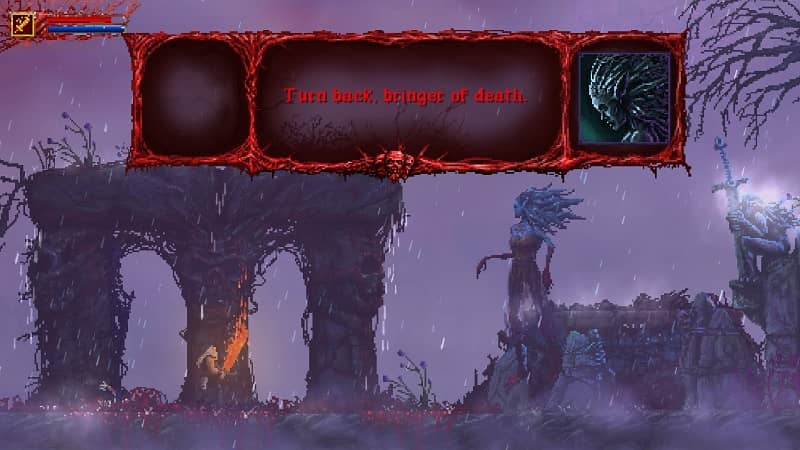 Another major problem is that the controls are too rigid to make blocking and back dashing actually useful. Being unable to cancel attacks with either, you’re often left defenceless by enemies that don’t care that you’re hitting them in the face with a fire sword, they’ll just hit you anyway. Combat in Slain: Back from Hell then, is never reactive; you never feel able to make the most of your available skillset, dashing and blocking as you see your enemy raise their arm to attack. Instead, you’ll opt to bait the enemy into attack where possible, getting the odd hit or two in before retreating to safety once again. Sure, it makes battles feel measured, but it also unduly slows the pace of the game down, and when the screen is filled with enemies and projectiles it’s a tactic that proves to be much less effective.

Despite Slain: Back from Hell’s shortcomings though, it does prove to be challenging fun at times. As mentioned earlier, the rocking soundtrack does a great job of motivating you to decimate the ghastly creatures that stand in your path, mixing heavy guitar riffs with haunting and intricate melodies during moments of downtime between battles. The visuals should also be applauded, dripping with atmosphere despite their pixelated nature and displaying a fantastic level of animation. There are other nice touches too, such as the ability to switch between elemental weapons as you acquire them and a hub-like structure that allows you to return to previously completed levels at will as well as choose your next destination. One level even has you turning into a wolf for a short while, which is thoroughly entertaining despite some control issues.

If you have an abundance of patience, a high degree of skill and the tenacity to not be defeated, then Slain: Back from Hell is likely to give you hours of fun. For most though, it’s just going to be the cause of extreme levels of anger and frustration. It’s a shame, as with just a bit of further tweaking here and there it could be one hell of a brutally satisfying experience whilst still remaining challenging. As it currently stands however, with its stilted controls and unfair game mechanics, I can only recommended it to the masochistic, revelling in the humiliation and agony it brings.

Slain: Back From Hell is available on PC, PS4 and Xbox One. This review is based on the Xbox One version.