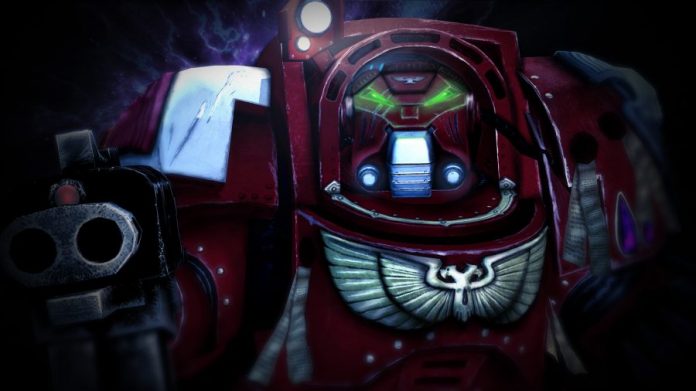 About 45 minutes into my relationship with Space Hulk Ascension, I was forced to type in the most humiliating of phrases online: “Beginner’s Guide”.

It is something I try to avoid, preferring to learn a game’s tricks on my own, but as I watched my Space Marines repeatedly get massacred on the third tutorial phase; I just could not help it.

So, yeah. Space Hulk Ascension is damn hard. It beats the player into a pulp and punishes even the smallest of mistakes. The slightest of missteps will lead to a death screen in a matter of seconds. But in itself, that is not necessarily a negative or positive comment. The level of challenge provided is not an end in itself, and the value of that struggle is defined not only by the experience but also what comes after. Is the pain worth it?

Let’s get things started with some backstory. A long time ago, before the days of portable computers, virtual reality and internet critics, games of the tabletop variety used to be played. Space Hulk Ascension began its trade as one of these ancient forms of entertainment. Pitting bulky Space Marines against a predatory race called the Genestealers. A strategy game that forced players to think before they act, the popularity of the board game led to an online adaptation in the form of a 3D, turn-based strategy game.

There is a genuine reason to get excited whenever a digital version of a respected board game is announced. A computer is just easier to access and setting up a game is not dependent on actually having someone willing to play with you. Besides, with how far digital technology has developed, the possibilities to really bring to life those fantasies that once were confined to our mind’s eye is enticing, to say the least. 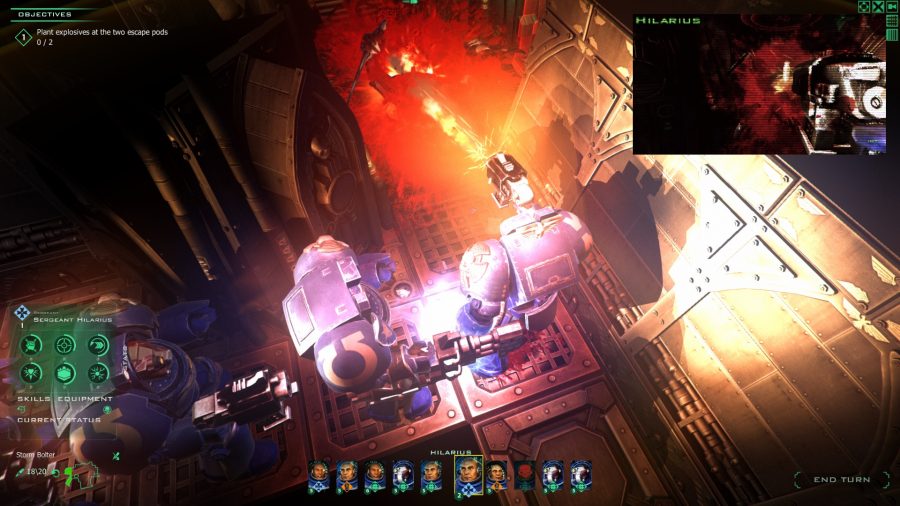 Set in the Warhammer 40k universe, Full Control’s Space Hulk Ascension was originally released in 2014 on Steam. Finally making its way to consoles, this version offers an incredible amount of bang for your buck, with five available campaigns at the start of the game (with five more faded out). The original game had over 100 missions to play through, so one can definitely get a lot of hours out of the game.

Each campaign places the player in charge of a squad of super soldiers whose job is to pretty much take back control of space from those dastardly Genestealers. Described as “Terminators”, the goals of missions can range from a simple “kill all” to “cleanse room” or just to make it across the map without your squadron being annihilated.

Although they generally all look the same, “Terminators” are divided into Heavies, Sergeants, Librarians or ranged/melee fighters. They all have their uses and a squad is never complete unless at least one heavy and either a Sergeant or Librarian is included. As battles are fought (and maybe won), your squad levels up and unlock new skills that can be assigned for stat buffs. New weapons/armor can also be equipped when a certain level is reached.

While in a mission, the player can choose how many of his Space Marines to send out (not more than five per outing) as they try to survive the gruelling task ahead of them. Like any standard turn-based title, action points are consumed whenever anything is done. Besides moving (and turning), players can choose to attack, change equipment or use a move called “Overwatch” which slaughters any alien that steps in the warrior’s path.

Although Space Hulk Ascension can seem overwhelming in the beginning (as my rush to the forums would attest) the learning curve does not take too long to climb. After a dozen missions or so, it becomes pretty obvious that the best way to survive is to abuse “Overwatch”. The missions do manage to offer a decent range of unique goals and aims, but the maps themselves all look fairly similar. And rather bland, to be honest.

Slipping from one greenish black corridor to the next, with the occasional 3 x 3 empty room, can get numbing after awhile. Both the aliens/terminators also seem to be pulled out of the same family tree, which not only makes it hard to tell your own squad apart, it makes it near impossible to really get connected to your ragtag group of personality-less robots. 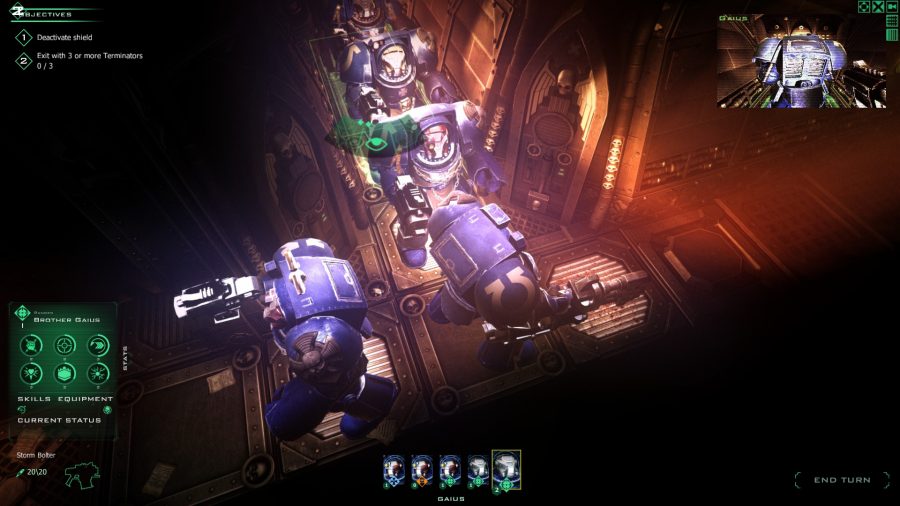 One delightful aspect of the visual design is a FPS screen on the top right corner that shows what your in-use character is currently seeing. Space Hulk Ascension really springs to life whenever a melee fight starts against one of the aliens and I happened to remember to peak up at this particular visual.

The core gameplay itself is honestly fun, especially with the speed boosted up to “very fast”. Admittedly, it does seem to get harder rather than deeper, but it did manage to keep me constantly on my feet while in the middle of a mission. I just wish there was a bit more to see, as after awhile it started to become truly grating to go from one identical map to the next.

Space Hulk Ascension is a love letter to the source material. Not a single pixel does not show the passion and respect that the makers must have for the original board game. Because of that, this is one that fans will most likely enjoy. As for virgins who are just itching for some turn-based strategy? There are plenty of more accessible titles out there; leave this one for the true fans.

Space Hulk Ascension is available on PC and PS4. We reviewed the PS4 version.