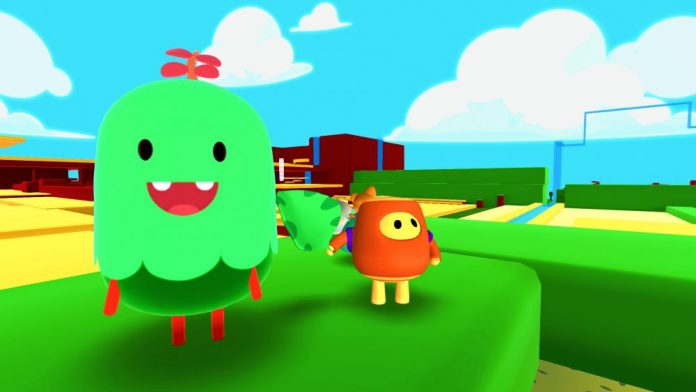 Believe it or not, I don’t particularly enjoy writing negative reviews.

Some critics get a kick out of unloading snark and sarcasm over the games they play, but not me. I get stuck thinking about the developer: the message they wanted to send, the entertainment they hoped to provide. But at the end of the day, it is my duty to be honest with my feelings about a game, and Woodle Tree 2: Worlds is so devoid of entertainment or messages that I must scrutinise it.

First, I need to describe my experiences just trying to get the game running. When I first booted Woodle Tree 2: Worlds it froze up on its loading screen. In my impatience I clicked around to see if it had actually crashed, which generated a “Software has stopped working” dialogue box from Windows. As it turns out, this happens in almost all of the game’s many, incredibly long loading screens. If you wait long enough, it should eventually push its way through whatever error is telling the operating system it has failed, but sometimes it crashes regardless.

From the get-go, the game places you into the central hub and provides no direct information. In fairness, you are intended to be drawn towards some discolored statues and guided by arrows and posters through a tutorial that introduces the game and its mechanics. However, this is just one area where the open world betrays the player: you can simply turn around or head through any passages except the intended one to reach an important area without any knowledge of supposedly crucial game mechanics. 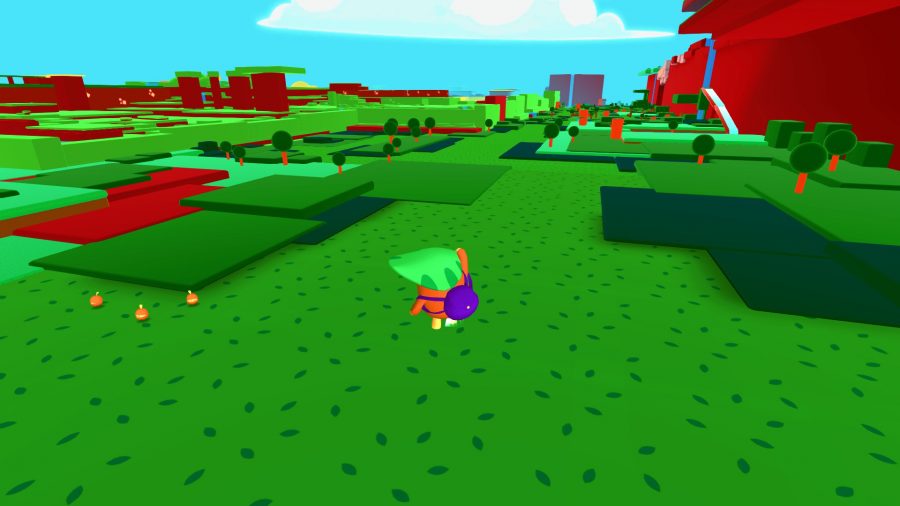 This leads me to my first major criticism of Woodle Tree 2: Worlds: you can complete the lion’s share without using many of the intended mechanics. That’s not due to clever level construction; it’s not the developer smartly implementing multiple paths to achieve a single goal. It’s just dozens of bad design choices. Frequently it’s because the levels are designed like… well, levels: linear, with each component building on the previous one. The problem is that they’re kind of just air-dropped into the middle of this open world, so it’s easy to just walk around and jump into the end of a level and work your way backwards, or reach a high point in the world and glide down to some lower point with a collectible (and where this fails, you can always mash jump against a wall and often reach its top).

In fact, the open world is to blame for a great deal of this game’s sins; it’s an empty and soulless plain of mostly featureless blocks. The world is massive and slow to travel across, and what’s more, you don’t really even have to wander through most of these miles of desolation. Each of Woodle Tree 2: Worlds’ eight “levels” are reachable via a short walk out from the hub, which you can teleport back to at any point. Before I realised this, I tried wandering the wastes, and here’s the real insult: even though there are no characters, collectibles, or tasks in these barren areas, the developer did occasionally toss in some air lifts leading nowhere, enemies guarding nothing, switch puzzles that bridge gaps to more nothingness. Let me remind you, this isn’t an Early Access game anymore. This is it.

I cannot even begin to fathom the design philosophies that went into Woodle Tree 2: Worlds. From the bottom up, everything is a complete mess. You continue to move even while the game is paused. The location of your character on the map is wholly inaccurate from your actual position in the world. Textures that “flow” like water and sand are animated like treadmills: on one side you see the water fall normally, but if you walk to the opposite side you can see it rising. Sometimes horizontal water streams will provide resistance against your character’s movement, and then midstream it will suddenly stop. The little face that pops up on the loading screens looks like it was made in freaking Microsoft Paint. If you utilise the online mode or summon a weird dog companion, the camera completely breaks and uncentres from your character. And moving platforms don’t even stay on their rails, as pictured below: 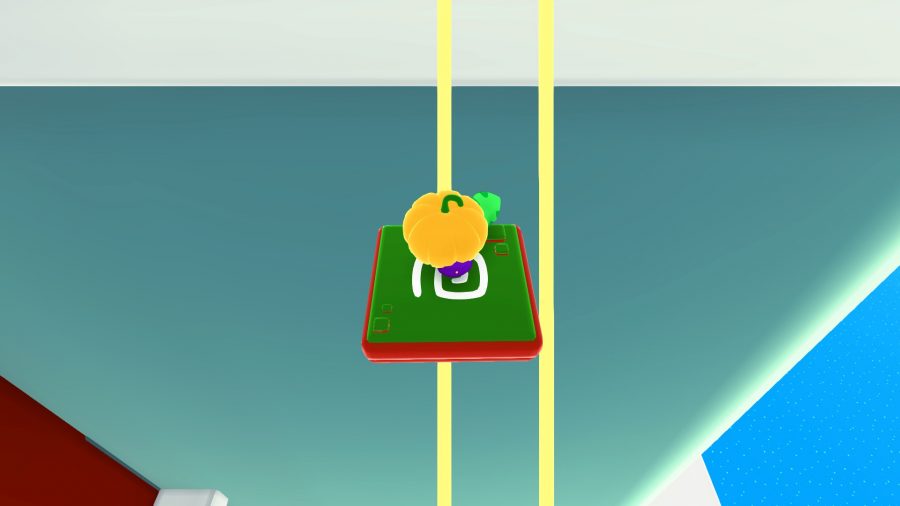 Even the sound design is atrocious. The musical tracks aren’t bad, but they are terribly repetitive and they sound like they were improvised by a couple of musicians whose stylings are incongruous at best. Enemies seem to have been programmed with dynamic music cues, like in Wind Waker. However, instead of the stylish, precisely coordinated tones of Wind Waker, what ends up happening here is every nearby enemy stuffs up the speakers with an awful hodgepodge of unsynchronised percussion. And here’s a fun one: if the track for a certain region is playing and you move into an area controlled by the minions of the evil Dark Sage Tree, it will start to play the “evil area” music while the current region’s music continues to play.

Finally, I want to talk about this gate: 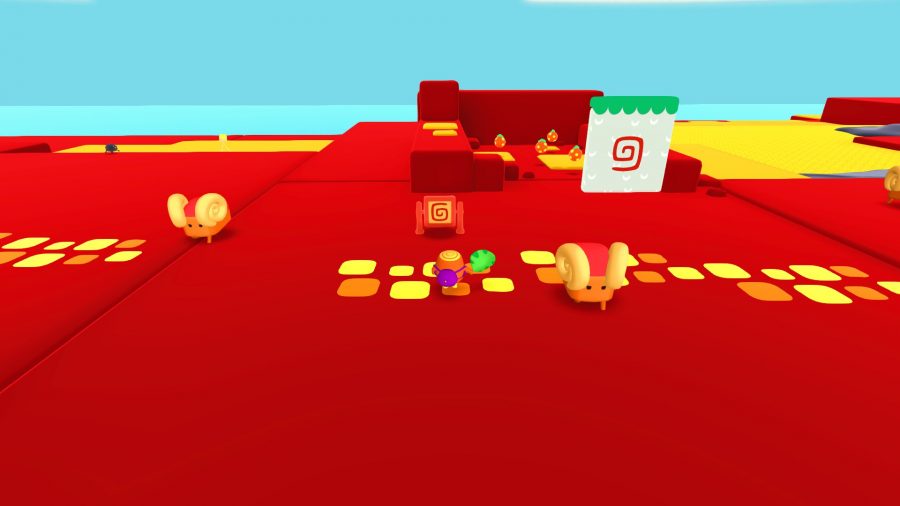 Using context clues, an astute player can discern that to lower this gate, you must strike the switch in front of the character. An astute player can also take one look at this screenshot and understand that it is nonsense. Why is the gate there to begin with when you can 1) walk through the clearly open gap right next to it or 2) leap over the obviously jumpable walls to the side? And for the sake of argument let’s say the gap isn’t there, and the walls are stacked high. Why is the switch directly in front of the gate? Yes, this is supposedly a game for young children, but you could at least throw in the illusion of challenge like so many other games do. But even then, there is no point, because all the gate blocks is a handful of non-essential pickups which respawn anyway. This is the kind of thing savvy game designers include when they want to mock bad game design or riff on arbitrary obstacles for pointless rewards, yet here it is played completely straight.

And that’s why this game is so indefensible. Woodle Tree 2: Worlds is nothing more than a shallow stack of primary colour blocks with no logic or merit to its haphazard construction. And though it pains me to lob such harsh words against an indie game, this one, unfortunately, has earned every one of them.