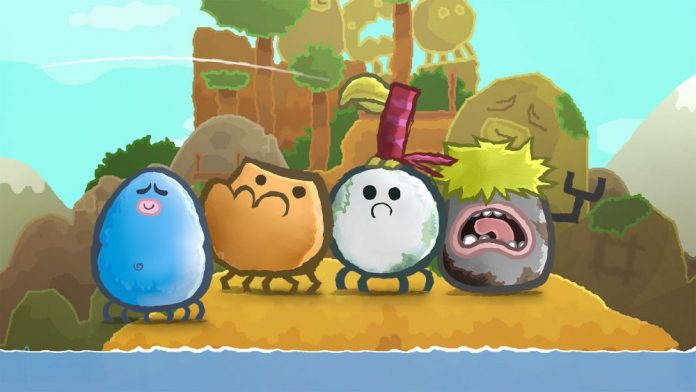 Have you ever been kicked out of your home because you couldn’t eat ice cream without creating messes so large they seem to defy natural laws?

Have you ever had a talking bird with a suspicious amount of knowledge about the world who you carried around in your pocket? Are you a small blob creature with an affinity for funny hats? If you answered “no” to any of these questions, but the prospect intrigues you, allow me to direct your attention to Wuppo.

Wuppo is lovely game from the team at Knuist & Perzik in which the player takes control of cute little amorphous blob creature called a “wum”. Exiled from his home in the Wumhouse, you’ll take your little blob out into the big world in search of a new home. Also, there are monsters, so watch out for those!

Wuppo is first and foremost a platformer, but it plays out in a sort of two-dimensional open world. In addition to jumping around and blasting away at monsters, players will also find themselves solving puzzles, wearing hats, irritating other wums, and discovering more about the world’s lore. Blending action platforming with RPG elements and an impressive degree of world building, Wuppo provides players with a rather unique experience. Particularly striking for me is the way that Wuppo providers players (like myself) who might not typically go for platformers with an atmosphere that rewards exploration and experimentation rather than strict technical prowess. And if you’re an avid fan of the platformer genre, there’s always the option to play on the “hard” or “insane” difficulty setting.

The opening sequences of the game find the player being kicked out of his home for making one mess too many, sending the poor little wum out into the world in search of a new place to live. A simple enough premise, the game has a lovely way of leading the player through bizarre and humorous encounters as they set off on their quest, with many unique and varied bosses to fight along the way. An ancient deity that’s a floating slab of stone? Check. A giant ice cream monster? Check. A giant sentient dust bunny? Bring it on! 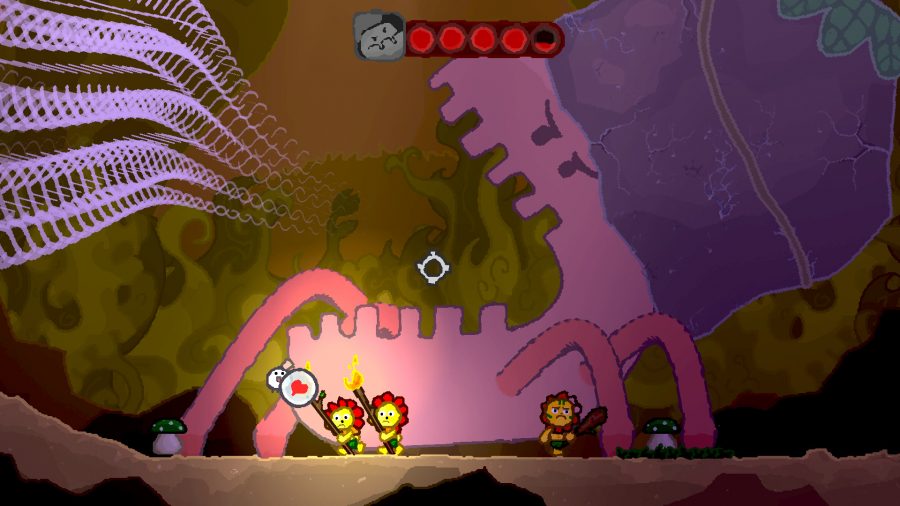 The bosses have a uniqueness that borders on the absurd, but somehow manage to fit into the game’s story and lore in a way that makes them enjoyable – if sometimes difficult. The game also allows you to speak with other wums, whether you’re buying items, asking for directions, learning about your environment, or just being friendly. These conversations are often short and simple, but the writing is of a level of quality that allows the many NPCs to reveal their own quirks and personalities over the course of just a few sentences. To further build upon the lore, scattered throughout the many environments are “filmstrips” which can be played at projectors in a number of locations, revealing a world with its own rich history and a crafted with a level of detail which one might not expect from a game which, on its face, appears so simple.

This brings me to the art style of the game. I can think of no better word to describe the look and feel of Wuppo than “charming”. With squiggly lines and a vibrant colour palette that gives the look of a crayon drawing, the world of Wuppo is lovely and expressive. Even your attacks are vibrant: the main weapon used by your wum is a gun that shoots gummy blobs of multiple colours. The creatures themselves, be they wums or the other races that inhabit the world, also manage to be emotive and interesting despite their minimalist designs. From a graphical standpoint, this game is altogether charming, cute, and visually pleasing

Beyond its writing and visual style however, Wuppo also manages to be fun which is really the ultimate point of the game. Beyond its standard platforming elements, the game also makes use of an inventory and currency system. This allows the player to collect useful items in the world or buy and sell them at various shops. These items may be artifacts used to complete a puzzle, cute hats that allow access to certain areas or provide other benefits, food for replenishing health, or simply be collectibles like the filmstrips. The game also includes a stat known as “happiness”, abbreviated as “HP”, which (surprise, surprise) increases your maximum health. This stat is increased through numerous different encounters and events, usually involving NPCs, so it’s a great incentive to have conversations while providing some way for the character to increase incrementally in strength as you progress. The controls are simple and the options menu seems to allow for controller support as well (though I have not tested this myself as I have no controller). The straightforward gameplay compliments the more story-driven or atmospheric aspects of the game well, and the two seem to settle into a nice balance with each other, with increased difficulty options for players who want to really test their attack-dodging prowess. 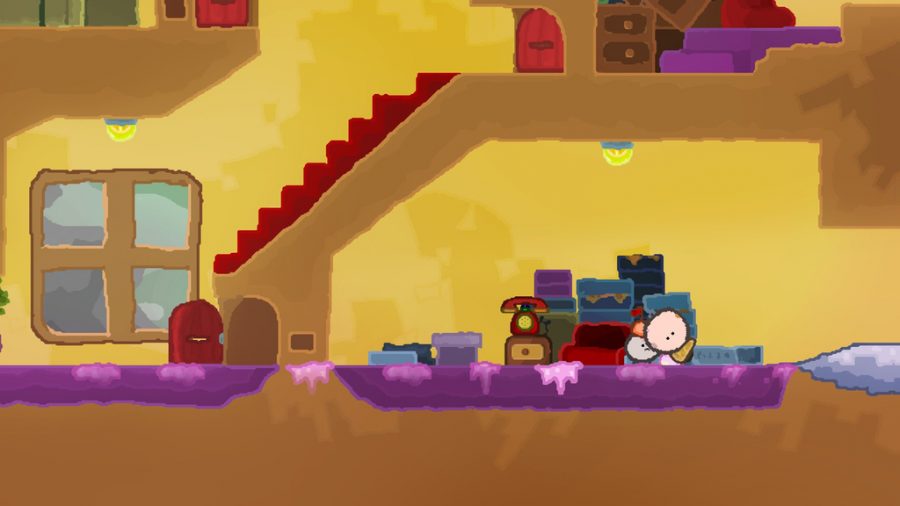 I do have a few slight critiques of Wuppo, but nothing that has managed to  significantly impact my enjoyment of the game. First, the game uses save points in form of “S” marked cans which you jump into to save your game. The process is unobtrusive and doesn’t even require you navigate any menus; simply jump in the can and the word “saved” will appear beside it, and they’re plentiful enough that I never found myself going out of my way just to save the game. That being said, the slight limitations of the system are still limitations. Second, as lovely as the art style is, there are no real visual indicators allowing you to differentiate between what features of the background are barriers, which ones you can pass through from below and stand on top of, and which ones are simply art in the background with no collision at all. This means that sometimes you just have to roll the dice as you jump toward something and hope you don’t fall through. Finally (and this is not so much a criticism as it is something to for potential players to consider), the game tends toward ambiguity with regards to progression. For many players, this will be a benefit, since not having the game hold your hand gives you more agency to explore and a greater sense of achievement when you discover the way forward. However, there were times where I wandered aimlessly with no idea what to do, and the game certainly felt less enjoyable during those periods.

In summary, Wuppo is a fun game with a lot of heart, made all the more enjoyable by the clearly evident fact that it has been meticulously and lovingly created. Wuppo is a game with character; it knows exactly what it wants to be and what it wants to do, and it accomplishes those tasks elegantly and creatively. I can’t ask much more of a game. It’s one of those special games that not only manages to look interesting on its Steam page, but actually delivers on the interest it sparks.

Wuppo is available on PC.