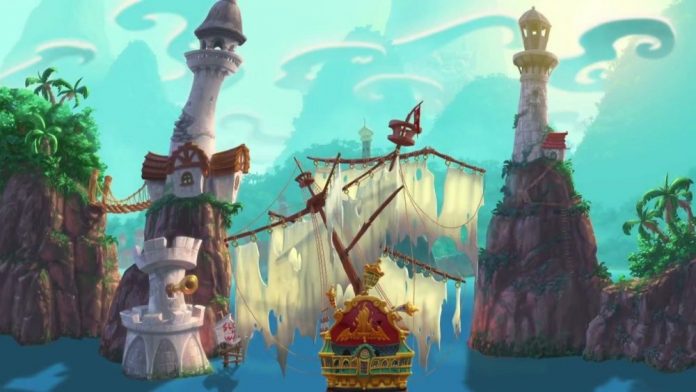 Until a couple of years ago, around the time when Broken Age came out, I had never been that into point-and-click games.

I always felt that there was something monotonous about walking around the same areas, collecting seemingly random items, and talking to people over and over again just to make the story progress further. Broken Age happened to be the game that changed all of that. Once I realised that point-and-click games were actually story-driven adventures underneath, it became easy for me to see that it’s a truly fantastic genre.

Duke Grabowski, Mighty Swashbuckler is a game from Venture Moon Studios that tells the story of a large, hulking man by the name of Duke Grabowski. Duke is a member of a pirate crew on the ship Brazen Blade, and he isn’t particularly popular with the rest of his mates due to his violent nature and very little smarts. When Duke decides that he wants to be captain of the Brazen Blade, one of his fellow pirates, Slewface, tells Duke that he has to first woo three women in order for the crew to think that he is captain material. And that’s where you come in. When the crew lands on a strange island, Duke sets off to find those three women to win over in order to earn his captain status.

The game mechanics for Duke Grabowski are pretty simple. Using your mouse you can click around the island of Bodacious Bay, collecting different items that you’ll eventually have to use to help you move along in the story. The other main thing you have to do in the game is talk to people all over the island. Not just ladies on Duke’s to-woo list, but anyone who might have some kind of information that you need. In point-and-click games it’s very important to go through each line of dialogue, no matter how useless or out of place they may seem, because you never know which line will be the trigger you need to move on with the story. Saying, “I like bananas” may not seem important at first, but you never know what it could trigger a character to say that could be imperative to your progress.

When it comes to visuals, Duke Grabowski didn’t give off a great first impression due to its characters’ expressionless faces. But that’s not to say that the first impression it gives should be its only impression. Although the look of the characters in the game isn’t something to brag about, the setting of the game, Bodacious Bay, is gorgeously designed. All of the backgrounds throughout are coloured beautifully and really shows what a busy, boisterous town Bodacious Bay is. Duke fits well alongside the cast of crazy characters on the island who are voiced by some very talented actors including the lead voice actor of Duke, Erik Braa, who has been featured in a few Telltale Games offerings and many others before becoming the mighty swashbuckler himself. 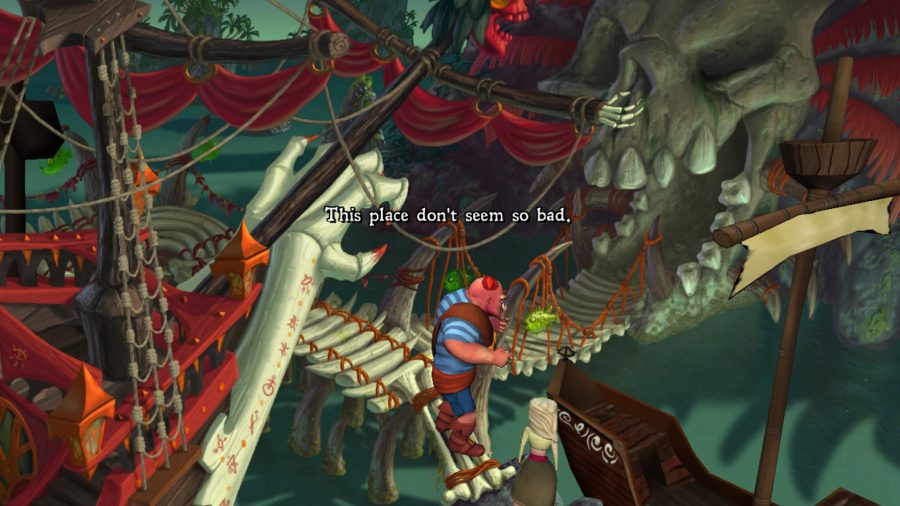 Where Duke Grabowski shines the most is in its story. The dialogue is very well written, – albeit some of it seemingly pointless – keeping everything funny and lighthearted. Duke isn’t so great with words and the entire experience of trying to help a gigantic, strange man to woo three women is fun from start to finish. Bodacious Bay’s citizens are also extremely unique and memorable, my favorite being the gorgeous Sheriff who may possibly be the only real sane person on the entire island. Altogether the cast of Duke Grabowski, along with its hilarious story make it a great addition to the point-and-click genre. Although, it is not without its faults.

Probably the most persistent problem you may encounter when playing Duke Grabowski is its sound issues. At times the music would be quiet one second and very loud the next, which can be quite problematic when you’re wearing headphones. There were also times when I would be having a conversation with someone and the music was much louder than the dialogue, making it nearly impossible to hear what was being said. There didn’t seem to be a way to fix this in the settings at all and was quite frustrating to deal with at times.

Overall, Duke Grabowski, Mighty Swashbuckler was a short but entertaining experience. For most it is said that the game takes around two to three hours to beat. For those of us who aren’t so good at puzzle games, it takes around four or five. The story is funny and some of the setting design is really well done but the characters’ animations and looks fall a little short, and the sound issues are not easily ignored. Either way, Duke Grabowski is a game that those who are fans of the point-and-click genre will enjoy and will remind them of the classics in the genre such as Monkey Island or Day of the Tentacle. Pick up Duke Grabowski if you’re interested in a hilarious puzzler that the likes of Blackbeard the Pirate would be proud of!