If you’re a fan of the equine species and the sport that involves gentleman of a small stature riding on their backs around a circular course, then you’ll be pleased to know that a game depicting such activity is now available on Xbox One. Your excitement will likely be short-lived though, once you realise how very terrible that said game is.

Horse Racing 2016, doing exactly what it says on the tin, is a very obviously low-budget project from Yash Future Tech Solutions, a small team of Indian developers. While they’ve made a few games for mobile devices previously, Horse Racing 2016 looks to be the first game they’ve released on a console format. And unfortunately, it shows.

The graphics. Oh, the graphics. A reminder of the year (2016) may be tacked onto the title, but you wouldn’t know it by looking at the visuals that Horse Racing 2016 has to offer. You’ve probably seen better-looking games on your PS1 back in 1996. Incredibly scrappy and blocky 3D textures make up the locations – all of which are strikingly similar to each other – and the horses themselves lack any kind of dimension at all. Still, we all know that looks aren’t everything, and I’d be able to get past the 20-year-old visuals if the game’s other facets were up to scratch. Sadly, there just isn’t much in the way of any kind of redeeming feature.

The game is split over 10 championships, with five events in each. There are a variety of event types, including straight sprint races, hurdles and even a couple of show-jumping events towards the end. Unfortunately, no matter what type of event you’re playing, it all boils down to the same thing: mashing the “A” button like a lunatic to make your horse run, using the left trigger to jump over any hurdles, and using the right trigger to whip your horse at the right time to keep up his momentum. It isn’t fun, and having to mash a button through fifty events is good for not much else other than a bout of repetitive strain injury. 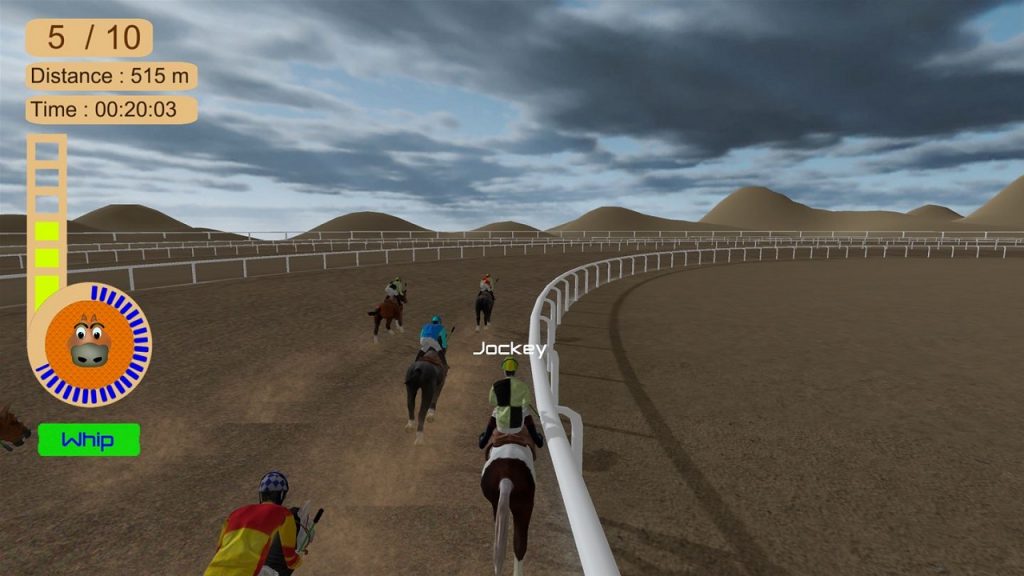 There also seems to be no need for skill in Horse Racing 2016. Winning or losing seems to be determined at random; I’d miserably lose some races, then win another by a mile while using the same techniques (as much as you can call mashing a button a ‘technique’). The only thing that seems to matter – especially on short races – is getting your horse off-the-mark quickly at the beginning. At the start of each race, you’re given a meter with two arrows that quickly scroll from left to right. The aim is to push a button at the right time in order to line up both arrows in the centre – but your opportunity window is so small that it’s the most difficult part of the game. And since a successful start can be the difference between victory and miserable failure, you’ll likely want to restart events several times until you can get a half-decent start. Providing, of course, you actually care at all about playing the game and doing well – which, all things considered, you likely won’t.

I hate to be so harsh on a game; I suppose the fact that I was able to sit through and complete Horse Racing 2016 in its entirety (a feat that thankfully only took a couple of hours) stands for something, and considering that there are no other horse racing games available on console means it at least satisfies a niche that no other game does. But honestly, if you’re really into horse racing, just stick on Forza, or The Crew, or any racing game and, I don’t know, pretend they’re horses instead of cars or something. Trust me, it’ll be much more enjoyable.

I like to support indie developers, and it’s always commendable when such a small team sets out to create their own game – especially when it’s a niche that’s yet to be covered – and so for that, Yash Future Tech deserve some recognition. They’ve at least attempted to stick some standard racing game tropes in there, such as being able to change your view (from first person to third person and even an overhead angle), and the inclusion of an overarching leaderboard that shows your overall progress helps to tie each individual championship together. It’s just a shame that Horse Racing 2016 is not in any way fun to play, and sadly the only enjoyment I got out of it was the bemusement of how bad it truly is. There are much better ways to spend a tenner, so do yourself a favour and keep a wide berth of this one.

Horse Racing 2016 is available on Xbox One.