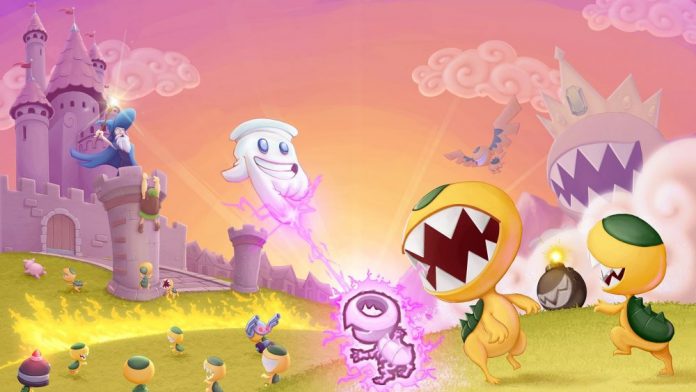 The tower defence genre is primarily known for its entries on mobile platforms, though a few trickle into the console market every now and then.

Krinkle Krusher, developed by the Brazilian studio Ilusis Interactive Graphics, is one such game. It feels almost lazy to describe Krinkle Krusher as another game with the typical mobile formula, but at the same time, I feel that it adequately sets expectations of what Krinkle Krusher is intended to be. It is a simple and repetitive game that fails to exceed any expectations.

When the kingdom decides to throw a celebration and unveils a massive cake, they accidentally awaken and attract the krinkles. What’s a “krinkle”, you ask? Allow me to enlighten you. Krinkles are essentially little creatures sporting no eyes and big pointy teeth – presumably for eating cake. To protect the kingdom, the mage and his annoyingly talkative magic glove are brought forth to fend off waves of these peculiarly cutesy creatures. With a cutesy art style and a cheery, playful soundtrack, Krinkle Krusher’s satisfying aesthetic appears to target younger players.

Typical tower defence is in true fashion here: enemies flood in from the top of the screen and head downward along a linear pathway to reach the castle walls. As the mage’s glove, you utilise a variety of magic rings that provide you with different magical abilities. Initially you begin with but a single ring, though new spells are periodically added to your arsenal. Magical abilities have a charge meter that depletes with use and slowly regenerates over time. Completely empty your charge meter and the spell is temporarily disabled – this motivates players to use their spells strategically. An upgrade system can be unlocked, allowing you to spend gems you have earned on strengthening your rings.

In addition to new rings, new types of krinkles are also regularly introduced, with some that can be defeated in specific ways to benefit the player. Fiery krinkles can grow from the use of your magic spell, and then explode when you set them off using an energy bolt, killing other nearby krinkles in the process. This helps create combos, resulting in a higher stage score and a greater likelihood of getting a three-star ranking. Obtaining three stars on a stage rewards the player with a gem, which can then be spent in the previously mentioned upgrade system. 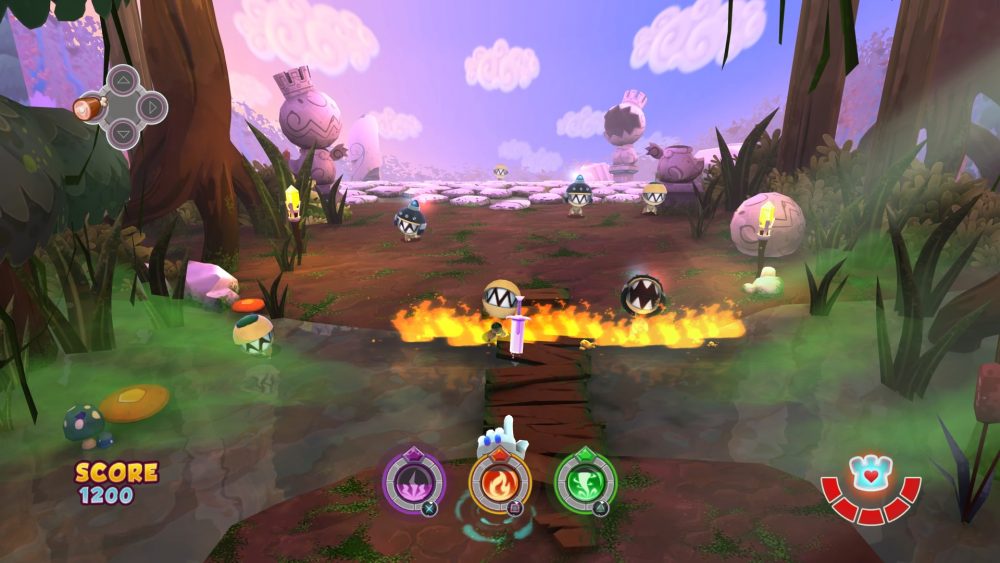 Unfortunately, Krinkle Krusher solely relies on this rinse-and-repeat formula for each of its 60 levels. Despite new spells and enemies, repetition sets in very quickly. It only took playing a few levels at a time for Krinkle Krusher to wear out its welcome, and at no point was I motivated to return to improve my stage scores. The shallow and repetitive gameplay never exceeds expectations of a simple mobile game, and thus, I was left feeling quite underwhelmed.

What makes matters worse is Krinkle Krusher’s imprecise controls; placing spells with the Dualshock 4 controller was often frustrating. It is far too easy to place a spell that narrowly misses an enemy, and a few misplaced spells can easily result in being overwhelmed by enemies. When the gameplay itself is simple and the controls behind those mechanics are unreliable, it weakens the experience even further. I’m tempted to argue that this may be more enjoyable on the PlayStation Vita, where gestures on the touch screen trigger the different spells. Krinkle Krusher is also cross-buy compatible, so owners of both systems may find a more enjoyable experience there.

The game is also worsened by the awful execution of the camera. The camera positions itself as an overhead view, as in typical tower defence. However, rather than a direct top-down perspective, the camera angles to present itself as a view from behind the castle wall. As enemies near the bottom of the screen to attack your castle, your castle wall blocks your sight of the enemy. This turns any opportunity for a tense last-minute save into a frantic spam of spells in the hopes of defeating the enemy. In more challenging levels, this poor design choice becomes immensely frustrating.

Despite its appealing visuals and playful soundtrack, Krinkle Krusher is a simplistic and generic tower defence game that is made worse by its use of its imprecise physical controls. This feels like a game that should be played on touch screen devices, and even then, the gameplay is too simple and repetitive to ever keep players’ attention or be even remotely memorable. In the end, the only thing that Krinkle Krusher krushed was my motivation to continue playing.

Krinkle Krusher is available on PC, Xbox One, PS4 and PS Vita. We reviewed the PS4 version.